On December 2, ITMO University was among the universities that hosted the semi-finals of the International Collegiate Programming Contest (ICPC). More than 100 student teams from the European part of Russia, the Ural region, Belarus and the Baltic states competed for the right to take part in the final stage of the world’s largest programming contest, which will take place in Porto, Portugal next year. The team from Lomonosov Moscow State University, champions of this year’s ICPC, emerged as winners in the semi-final stage. 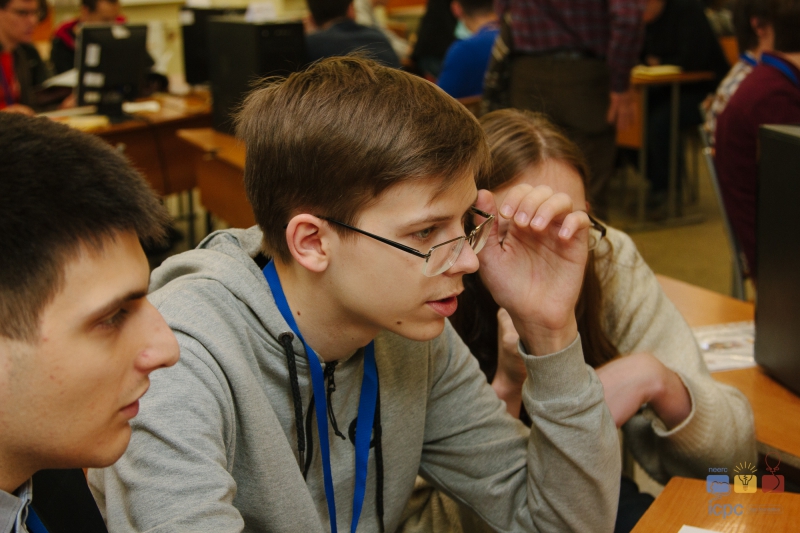 The International Collegiate Programming Contest was established more than 40 years ago. As the world’s largest and most prestigious collegiate programming event, it grows with each year. In 2018, more than 50,000 students from 3,000 universities all over the world participated in the event.

This Sunday, regional competitions took place in St. Petersburg, Barnaul, Tbilisi and Almaty, during which 318 student teams demonstrated their programming and teamwork skills. Winners of ICPC don’t just gain prestige in the IT community, but also get job offers from major companies in tech. Companies JetBrains and Huawei, for instance, are official partners of the contest and keep a close eye on the results.

All ICPC teams consist of up to three students aged under 25. Over the course of five hours, they are tasked with solving 8 to 13 problems based on actual cases encountered by professional programmers. Solutions must be given in the form of software written in C++, Java, Python or Kotlin.

Every team only gets one computer with no access to the internet or any other external network. Participants must work side-by-side to solve the tasks quickly and without errors: final scores are based on the time taken to solve each problem, as well as the number of incorrect attempts.

On December 2, 130 student teams came to ITMO University in order to compete for the Northern Eurasia Cup and a ticket to the ICPC finale. Among them were students from Russia, Latvia, Belarus and Lithuania.

“Excellence is an art won by training and habituation. We do not act rightly because we have virtue or excellence, but we rather have those because we have acted rightly. We are what we repeatedly do. Excellence, then, is not an act but a habit."

According to the executive director of ICPC, the pursuit of excellence has never been more important for programming students.

Drs. Donahoo and Poucher also helped out with running the contest: together with other volunteers, they brought air balloons to the teams’ tables. The balloons signify a completed task and serve as a way of keeping track of the teams’ progress.

According to jury member and ICPC 2015 champion Boris Minaev, the Lomonosov Moscow State University’s team, which won the previous contest, are likely to be one of the stand-outs.

“Of course, there are also some very capable contestants from China and Poland. Their training procedures are different from ours: they learn to solve slightly modified tasks and use their own algorithms. But knowledge of algorithms isn’t as important at the finale as your ability to be creative. And that’s hard to learn. It comes with experience and training, preferable five hours of it a day. It’s the only way to hone your skill and fight stress,” shares Boris Minaev.

The absolute winner of the North Eurasian Finals was the team Moscow SU-3 from the Lomonosov Moscow State University; its members Mikhail Ipatov, Vladislav Makeev, and Grigory Reznikov were the only ones to solve all 11 problems. The second and third places went to teams Moscow IPT 6 and Moscow IPT1, both representing the Moscow Institute of Physics and Technology.

Two teams from ITMO University won silver medals. This year, the university’s select team is made up of students who had never participated in the final stage of ICPC before.

Below is the complete list of teams that will take part in the final stage of ICPC-2019: