The NATE 2019 Jubilee Convention was held at ITMO University on April 17-19 and brought together nearly 400 English language teachers from around Russia and 20 international guests. The participants met new colleagues and shared their knowledge and inspiration amid the event's warm and welcoming atmosphere. 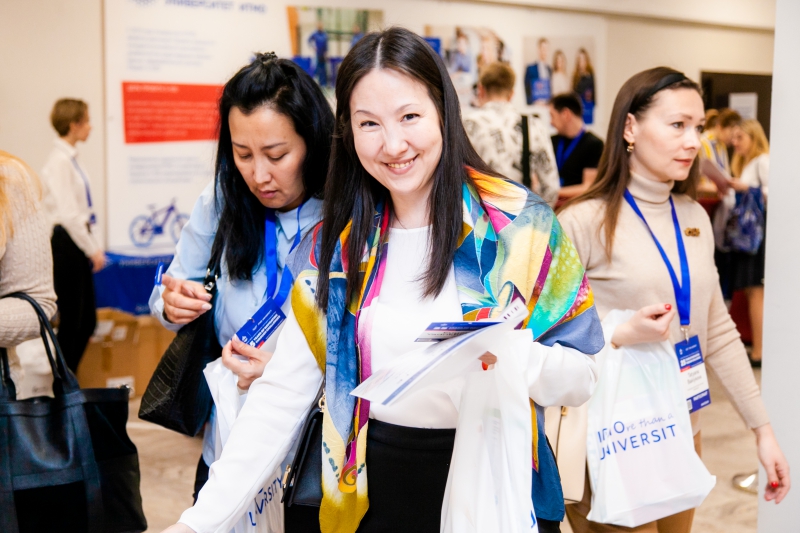 Over a year ago, ITMO University was granted the opportunity to host a convention of the biggest English language association in Russia – the National Association of Teachers of English (NATE). The association is headed by its honorary President and Founder Svetlana Ter-Minasova who describes it as a “new way to learn about other cultures through learning their language”. NATE brings together the most enthusiastic teachers of the English language all over Russia through a range of activities, conferences and conventions. Its annual NATE Convention is one of the organization’s most significant events of the year. The aim of this year’s Jubilee Convention was to explore new educational approaches and current trends in English language teaching and learning in a dynamically changing environment.

“The NATE Convention gave us a valuable opportunity to meet colleagues from all over the country, and beyond. They are eager to develop their skills, become better professionals, and, what is also important, they are ready to share their knowledge and unique experience with others. This conference created a very encouraging environment for professional growth. I would like to express our gratitude to the English Language Office of the US Embassy in Moscow and the publishing companies that sponsored the event. Their support helped us make this conference a success,” shared Kristina Ivanova, the Director of ITMO’s Foreign Language Training Center.

Preparations for the Convention were underway more than six months prior to the event. More than 220 proposals were received and reviewed; finally, the best were chosen to be presented in conference proceedings, plenary speeches, workshops, and other events of the conference. Publishers such as Cambridge University Press, Pearson, Macmillan Education, and Bookhouse presented their latest textbooks, and materials during the Expo.

Before diving into workshops and presentations, the participants explored the sights of St. Petersburg and also visited ITMO’s Optics Museum where they got the chance to see fascinating optoclones, a hallway of mirrors, a heat-tracking camera, and other fun optical devices and experiments.

“The 25th Jubilee NATE Convention was a memorable meeting during which new knowledge and best practices were shared. It was an opportune time to renew contacts and discuss issues of mutual interest with peers from different regions of Russia and abroad. It is gratifying to note that the agenda of the Convention covered a wide range of very interesting items relating to various areas of ELT. Special thanks to the ITMO University faculty, staff, and student volunteers, in one word – to ITMO’s team, without whom this conference would not have been possible,” said Tatiana Margaryan, NATE Board member and Associate Professor at Bauman Moscow State Technical University.

The Convention was opened by Daria Kozlova, ITMO’s First Vice Rector, Natalia Komissarova, the Coordination Council Chair of NATE Russia and associate professor at the Moscow Metropolitan Governance University and professor Svetlana Ter-Minasova, the President of the Faculty of Foreign Languages and Area Studies of Lomonosov Moscow State University.

Parallel workshops that were held during the convention covered topics ranging from strategies for academic writing and research to using the latest technologies and games in language education and other practical tips for teaching English as a foreign language. Special interest group presentations and workshops focused on such topics as applied linguistics, soft skills, Russian as foreign language, English for specific purposes, English as medium of instruction and English language teaching.

“One of my biggest takeaways from the NATE conference was on a topic I thought I knew about: action research. I attended Svetlana Suchkova’s presentation, and I was so appreciative of the way she carefully walked the audience through various steps of action research. Her presentation was carefully designed to help the audience to brainstorm topics in a creative way. By the time I left, I had TWO ideas for potential future research projects of my own, thanks to her wonderful talk! All in all, it was a good reminder that we can ALWAYS learn, even about topics we think we know,” shared Rachel Koch, a US English language fellow at the Higher School of Economics.

“Undoubtedly, it's a very hard task to organize an engaging conference in which everyone would actively participate, especially when you’re holding it in the country’s cultural capital. However, the organizing committee did a great job: they chose very interesting topics for workshops, invited leading experts and "stars" in the field of pedagogy and linguistics. The environment was really cosy and homey. Many thanks for the professionalism and loads of new and useful information,” commented Marina Voronina, a senior lecturer at the Modern Languages and Professional Communication Department, Samara University

We were pleased to have the presence of several notable and well-known educators in the field of English language teaching from around the world. Emily Thrush travelled to St. Petersburg from the University of Memphis; Ana Maria Ferraro, originally from the USA (and a former US English language Fellow in Kazan) came all the way from Oman; and Nancy Burkhalter (a former US English language Fellow in Russia) came from the USA to present on academic writing activities that foster critical thinking. We were also pleased to have Magdalini Liontou from the University of Oulu in Finland conduct a workshop at the conference. She, together with her colleagues, Satu Rusko and Karen Niskanen spent a few days at ITMO before the conference collaborating with our English language staff.

“Even as a newcomer to Russia, NATE feels like a reunion. It’s a place for all the wonderful, hard-working English teachers to come together,” says Rachel Koch

It was a great privilege for ITMO University to host the milestone 25th NATE Convention, and together with all participants review its history and the role of NATE in the development of best practices and know-hows in the sphere of English language teaching.