People all over the world are still reluctant to learn new languages – even English, which is commonly seen as the new global language. We spoke about this topic with Robert Cote, Director of the Writing Skills Improvement Program at the University of Arizona, who came to ITMO University for the ESP Conference. Robert explained why no one can ever fully learn a language, why it’s important to start soon and why language learning can never work without tutors and group work. 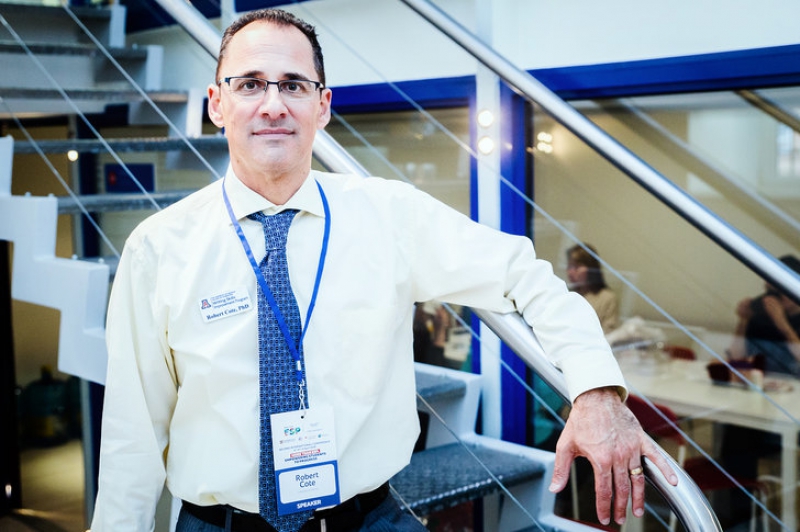 What do you think are the biggest challenges among those that were discussed at the conference? Which are the most relevant right now?

Teachers, regardless of their subject, and heads of educational institutions need to make sure that students use the English language more. One hour of language classes per week is useless. It must be at least an hour a day throughout all years of university. English in presentations, academic English - now that’s an advanced level of study. Moreover, and this applies to learning any language, students should have fun when they learn. If you like playing guitar, then you should watch guitar tutorials in English, learn songs in English, read guitar blogs in English. If you like museums or restaurants, write an online review in English and explain to people from around the world why they should go there - after all, you live here. We need to abandon the idea that it’s good only for, say, physics; no, it’s a language for everything. If your general, everyday English is good, then your academic writing and scientific correspondence will be better, too. People seem not to understand this way too often. Finally, it must be kept in mind that learning a new language is a lengthy process. Even I, as a native speaker, am constantly honing my academic writing skills. My colleagues and I proofread each other’s texts for articles and conference reports; we tend to start writing a week or even a month in advance.

What are the English language skills that can only be acquired through practical training?

Back in Arizona, we form small groups of students and teachers. Sometimes everyone in a group is in the same subject field, but that’s not mandatory. They write academic texts and discuss them with others, who tell them what they understood in the text and how well it reads. First, they’ll read a text by, say, a mathematician, and then another by an anthropologist. This way they learn to structure their work in such a way so as to make it accessible to wider audiences. A reader may not understand the complex formulas or terms, but they need to comprehend the general idea. Authors need to develop within them this sense of their audience because readers are the top priority. For example, a school teacher should be able to read a top scientist’s article and understand - if not the complex calculations, then at least the basic message.

So it would seem that your favorite teaching methods involve group learning?

That’s for advanced writing. All in all, I try to tailor most of my classes for each group. If I’m teaching a class on writing abstracts for scientific articles, then I’ll start with the specifics and rules of academic writing in general. Then, I model the process of editing an abstract by a given journal’s editor. What this means is that we discuss what can be improved, what has to be cut, etc. After two weeks or so of these classes, everyone writes an abstract for an article in their subject field and, once again, we discuss them all together. On the one hand, it’s group learning, but on the other, it’s very much individualized.

And what do you think of online learning? Will it replace group learning?

It won’t. The internet is a resource. You go there to find information, but you need a teacher to explain it to you. You can learn words and their definitions, but how do you connect them? Sure, there’s Skype, but even in that situation, there’s a person on the other end. Depending on which preposition you put next to the word “bridge” in English, you may end up with completely different meanings. You need someone who can provide an explanation using their own cultural experience. You may know how to use a language, but if you don’t talk to others who use it, you won’t understand how it works.

There’s an interesting phenomenon in the world now: we have the formal, “standard” English, and then we have a global English that’s very much influenced by non-native speakers. Do you think that native speakers will one day have to learn to speak global English?

If you move outside an English-speaking country, you’ll have to re-learn some things. I spent some time working in Dubai with teachers from the UK and the US. In the States, we call those who monitor exam procedures “proctors”, while the British call them “invigilators”. There’s also a difference in how we say “schedule”: in the US, it’s /ˈskedʒ.uːl/, but it’s /ˈʃedʒ.uːl/ in the UK. When a colleague told me with a British English: “I need to set up a schedule for an invigilator”, I didn’t know what they were telling me and asked them to repeat that in English. They laughed and said that it already is - and I said, “Well, it’s your English”.

British English reigns over global English right now, but there are many students all over the world who want an American accent. I don’t know what causes that; perhaps it’s an effect of the mass media. Some parents send their children to British schools, and when their kids start speaking with a British accent, the parents panic and send the kids to international schools where American English is more common. I don’t think it’s necessary to focus on what accent a speaker should have and especially to voice these concerns to teachers. But students do it. Interestingly enough, I’ve noticed that many Russians speak crisp British English, and I find myself asking if they’ve studied in the UK or, perhaps, worked at the British Consulate.

I’ve heard that non-natives speak this sterile, crisp British English because they learn from those formal textbooks and not real-life experience. I think it’s also because we’re so anxious about making mistakes even though native speakers make plenty of those.

Yes, we don’t really think about all the slip-ups we make. If you were to record the talk I gave at the conference, there would probably be, I’d say, 10 to 20 mistakes. But the main issue with propagating the English language isn’t the accents, but the fact that children don’t start learning it early enough.

I know that some people’s kids these days start learning English in the second grade, but that’s a relatively recent change. For instance, I only started learning it in the fifth grade.

That’s still quite early. But even here, at the university, there have been times when I’d walk up to a young person and ask them where the bathroom is, and they simply couldn’t understand what the word “bathroom” meant. There is such a thing as the English Proficiency Index (EPI), which ranks 80 countries by the level of their citizens’ proficiency in English. Among the leaders are the Scandinavian countries and Singapore, which are all rich countries. The Philippines is 5th or 6th, and it’s a poor country. I’ve been to an orphanage in the Philippines, and the kids there, aged 8 or 9, could easily talk to me in English. How is that? Well, if you’re a school student there, you simply can’t get into the next grade if you don’t pass an English exam. After a certain age, all their classes are taught in English only. This is why the graduates there speak fluent English and can go abroad to work and support their families. To them, a second language is a way to survive, which is somewhat true for any other country - if you want to become more successful, learn English, or, better yet, several other languages.

Perhaps the issue for our country is that the children aren’t given any explanations why they need to learn English. They’re just told they have to, and that’s it.

Look at EPI rankings. Russia is in the 38th place; out of all the European countries, only Ukraine and Turkey have shown worse results. These countries are all on the border of Europe and Asia, so international communication in English is underdeveloped there. No globalization means Russia stays a “Russian” country and not an internationalized one. This is about economics and politics, too. Just look at Hong Kong - the people there are no longer as proficient in English as they used to be, and that process started when they rejoined China and started to consider themselves more Chinese. And yet in Chinese, you have these two languages, Mandarin and Cantonese, that are so different that speakers of both move to, say, the USA and can’t understand each other. It’s an interesting phenomenon.

Is that why we should learn English? To help everyone communicate with each other?

Knowing how to speak English is great, but if you also know, for instance, Arabic, you’re much more in demand as an employee. That’s why I tell my students: languages are doors into a world of greater opportunity.