At the beginning of July, the Swiss city of Lausanne hosted the 11th World Conference of Science Journalists, which brought together over 1,000 specialists from Europe, the US, Canada, Latin America, Asia and Australia. Russia was represented by 18 people, including members of the Association of Communicators in Education and Science (AKSON), ITMO University graduates and Master’s students in science communication, and staff of ITMO Science Communication Center. In the course of four days, they discussed the most topical questions of science journalism and communication and visited CERN and Campus Biotech, where they familiarized themselves with the principles of working in major science organizations. 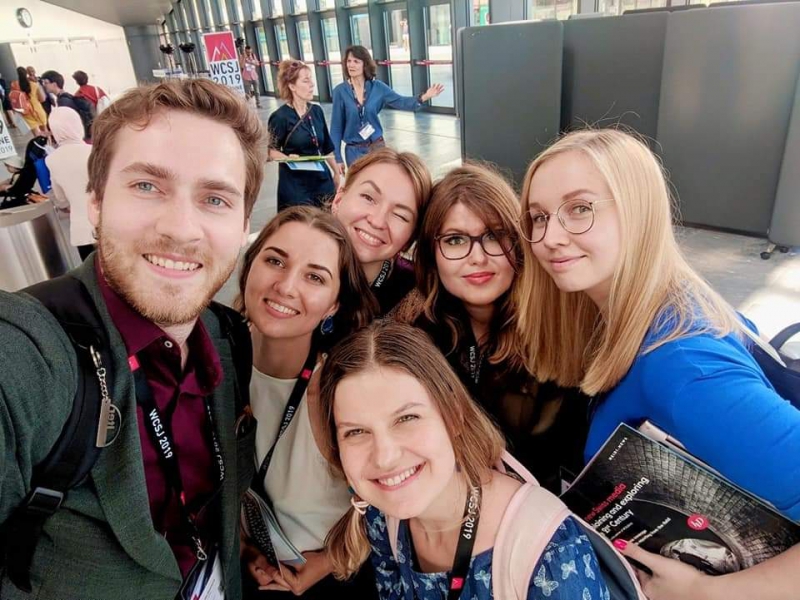 Organized for the 11th time, this year’s World Conference of Science Journalists was held at the SwissTech Conference Center (STCC) in Lausanne on July 1-5 and supported by three major European universities – the École Polytechnique Fédérale de Lausanne (EPFL), the University of Lausanne (UNIL), and the University of Geneva, as well as the European Organization for Nuclear Research (CERN).

According to the organizers, the main goal of the conference is to create a platform for collaboration and experience exchange between students and professionals in the field of science journalism from all over the world. In 2019, the event brought together a total of 1,137 people from 83 countries, including Switzerland, the USA, the UK, France, Germany, Italy, Belgium, Finland, Japan, India, Russia, Canada, India, Sweden, Spain, Australia, Netherlands, Mexico, South Korea and Brazil. Among the speakers were over 300 specialists in the field of science journalism and corporate communications. The conference also featured 63 sections, seven workshops, five press conferences, and a presentation of the latest achievements in science and media technology.

Russia at WCSJ-2019: a record number of participants and membership in the Federation of Science Journalists

Compared to the World Conference of Science Journalists held two years ago in San Francisco, where Russia was represented by just two specialists, this year a total of 18 Russian experts went to Lausanne. Among them are members of the Association of Communicators in Education and Science (AKSON), ITMO University graduates and Master’s students in science communication, and staff of ITMO Science Communication Center.

Apart from that, this year, ITMO University and AKSON organized a press tour for foreign journalists, which was included in the official program of the World Conference of Science Journalists in Lausanne. In late June, a group of international science journalists from Italy, Spain, France, Finland and other European countries visited ITMO to learn about the university, its scientists and inventions, as well as other organizations that have become hubs of St. Petersburg's technological and innovation industry: the companies Gazprom Neft and JetBrains.

Another important event for science communication in Russia is the establishment of the European Federation for Science Journalism (EFSJ), headed, inter alia, by Russian specialists.

The WSCJ 2019 started with the General Assembly, where the establishment of the new organization was announced, and its president was chosen. Among the Federation’s founders are national associations of science journalists of France, Germany, Italy, the Netherlands, Russia (AKSON), Switzerland, and the UK. Krijn Soeteman, a science journalist and the head of the National Association in the Netherlands, had been chosen the Federation’s first president. Among the leaders is Olga Dobrovidova, a science journalist, vice president of AKSON and associate professor at ITMO University’s Science Communication Center.

According to Olga Dobrovidova, this step is an indicator of the scientific community recognizing AKSON as an equal partner on the European continent, ready and willing to engage in international cooperation. Among the priority tasks she sets for herself in her new capacity is promoting the development of the competencies and skills of the continent’s science journalists and organizing the exchange of educational resources and opportunities between the founding federations of EFSJ.

“The Federation’s main focus will be the upholding of professional interests of science journalists. But what is also very important is that participation in this effort provides the Russian Association with new prospects for cooperation with a variety of European institutions, major research centers, and committees. One direction to be explored is joint work as part of EU grants, opportunities to create collaborations and receive funding for such projects. And, finally, in a larger sense, in the context of communication this is a great opportunity to gain new and highly promising contacts,” adds Dmitry Malkov.

Looking ahead, the Federation’s tasks may also include the organization of major professional events, conferences and forums in Europe, adds Dmitry Malkov. For example, in 2020, the city of Trieste (Italy) will host the EuroScience Forum (ESOF-2020), the biggest European scientific conference that brings together researchers, science journalists, publishers, and public authorities. The program of the Forum will also feature a one-day conference of science journalists, organized by the Italian Association of Science Journalists and supported by other founders of the European Federation for Science Journalism.

Among the key topics of the 11th World Conference of Science Journalists in Lausanne are climate change, questions related to the CRISPR/Cas9 method, fake news in science, interaction with audiences, promotion of the role of press officers in scientific organizations, YouTube’s impact on science journalism, visualization of scientific data, and many others.

“The main idea of this conference is to bring together science journalism specialists not only from Europe but also the world over; there were delegates even from as far away as Oceania. What is also important is that when you meet communicators from Panama and Japan, you realize that in actual fact, we all face the same challenges: how to prepare the materials, how to improve professionally, the limitations of science journalism at universities and so forth. There is a whole lot of topics that unite us,” says Daria Denisova, deputy director of ITMO University’s Science Communication Center.

She adds that many topics discussed at the conference are already being actively explored by the students of ITMO’s Master’s program in science communication. For example, one workshop held as part of the event was dedicated to the role of comic books in science communication. This topic was researched by now-graduate of the program Daniil Shirokov as part of his Master’s thesis. Later, having developed his work even further, the researcher won a student competition of research papers proposing solutions for creating a tolerant environment in St. Petersburg. In his turn, another Master’s student, Dmitry Lisovsky, has come up with a visual project dedicated to neurobiologist, illustrator and author of Neurocomic Matteo Farinella, who conducts research on the human brain.


“The discussions emerging during the sections and workshops, too, were very emotional. Today, a lot is being said about the advancing rapprochement of science and art, and indeed, we have to search for new forms to engage new audiences. Simple formats, such as when you just send out a press release, just don’t work anymore. And all the speakers united in the conclusion that we have to develop novel methods of engagement,” says Daria Denisova.

Separate sessions were dedicated to the role and rights of women in science. Sparking a lively exchange of opinions was a panel on the principles of interaction between journalists, press officers and state agencies, as well as that on the role of universities in the development of science journalism and content creation. The participants also attached great importance to the principles of generation of journalistic materials.

How to tell stories? How to work with their protagonists? How to communicate information in the fastest and most effective way possible? These questions are especially relevant for African countries. Among the participants was a government minister of the Democratic Republic of the Congo, who confirmed that, in the face of a yet another resurgence of the Ebola virus, well-coordinated efforts, including those by journalists, who are responsible for the proliferation of information, can have a major impact on the situation to the extent of saving people’s lives.

“We had a very busy and varied agenda. The first day of the conference consisted of workshops, while its main days encompassed sections which lasted until late in the evening. In addition, the program included a number of tours, as part of which participants visited different companies and learned about their products. Final days included field trips which also gave us the opportunity of visiting different organizations and enterprises,” shares Valeria Prokuratova, PR specialist at Science Communication Center.

Field trips: CERN from the inside, a tour of Campus Biotech and over 20 other options

All in all, the conference’s program included over 30 trips to different science centers, companies and universities. For one, participants could discuss the latest research on climate change whilst on a glacier, ascend the highest railway inside the Eiger to the Jungfraujoch research station tracking greenhouse gases, see the world’s tallest and boldest gravity dam La Grande Dixence in the Valais region, and much more.

The staff and students of Science Communication Center headed to CERN, a workplace of the Center’s researcher Daria Dvorzhitskaya. There, they visited the Microcosm museum, which gives an insight into the work of the world’s largest particle physics laboratory and its flagship development, the Large Hadron Collider. On top of that, Dmitry Malkov joined a team of journalists visiting Campus Biotech, which houses state-of-the-art research institutes and biotechnology companies.

“This conference provides a perfect springboard to the career of anyone attending it for the first time. The opportunities are endless, ranging from professional training, new contacts, and, above all else, excellent new experiences. Our students and everyone forming part of our delegation got the chance to gain a first-hand understanding of not only how science journalism works in different countries all over the world, but also how corporate communications operate in Europe. All these things just don’t compute when you sit and work at the same place. And it’s great that AKSON members have more accessibility to such international events thanks to participation discounts provided by the Association,” says Dmitry Malkov.

According to Daria Denisova, the conference provided an opportunity to meet a large number of colleagues from Europe and the US, gain new contacts and discuss prospects for the development of ITMO’s program in science communication with prominent specialists. For one, the participants of the conference got to meet Deborah Blum, one of the authors of the seminal book A Field Guide for Science Writers, a Pulitzer Prize laureate and director of the Knight Science Journalism program at MIT.

Apart from that, the specialists of the Science Communication Center reached an arrangement with Daniela Ovadia, science director at Agency Zoe and medical journalist, on the cooperation as part of a new specialization in Science Communication in Medicine and Biotechnology, which is to launch at ITMO University at the start of the next academic year, and held a discussion on the launch of a new digest Formula of Science PR 4.0, which is a collection of best practices in the field of science communication. As noted by Daria Denisova, their international colleagues expressed an interest in translating the digest into English. You can learn more about the previous edition of the digest and discover why reading it is a must for everyone interested in science communication and journalism, in this article by ITMO.NEWS.