The international conference Mendeleev 150 took place at ITMO University on June 26-28. The event’s participants celebrated not only the 150th anniversary of the creation of Mendeleev’s periodic table of elements but also the birthday of the International Union of Pure and Applied Chemistry (IUPAC), which supported the conference. Read on to find out more about the event, Mendeleev-brand vodka, and the history of the periodic law. 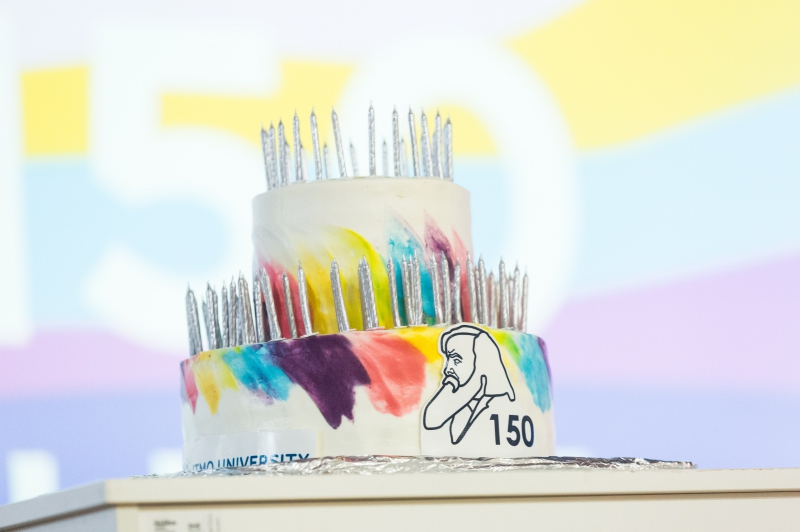 The international conference Mendeleev 150 was held as part of the United Nations’ International Year of the Periodic Table and was endorsed by two organizations: UNESCO and the International Union of Pure and Applied Chemistry (IUPAC).

IUPAC is at the center of the world’s affairs in the field of chemical nomenclature and terminology; the union’s staff are responsible for establishing the standards of methodology, atomic weight, and other crucial values. In addition, IUPAC publishes scientific reports and books and assists in the organization of major chemical conferences, Mendeleev 150 being one such event. This year, the organization has turned 100 years old.

“IUPAC and its official support mean a lot for the conference. Their endorsement of any event in the world of chemistry serves as a guarantee of its top-notch organization and scientific program. It is also a worthy reason for world-class scientists to visit the conference, and IUPAC even assists in promoting events through its many channels of communication. It just so happened that the union’s one-hundredth birthday coincided with the third day of the conference. Natalia Tarasova, the former president of IUPAC, and Mei-Hung Ciu, a member of IUPAC’s Executive Committee, were there to express their congratulations. And Qi-Feng Zhou, the current president of IUPAC, recorded a special video message,” says Mikhail Kurushkin, chair of the conference’s organizational committee.

A day prior, Sir Martyn Poliakoff, – a professor of the University of Nottingham, CBE and Knight Bachelor, and a member of the conference’s programme committee – too, expressed his best wishes. The renowned scientist was unable to come to St. Petersburg, but he recorded a special video message for the participants of Mendeleev 150. After congratulating the audience with the anniversary of the periodic table, he raised a shot glass of Mendeleev-brand vodka in a toast.

Known as a highly active popularizer of science, he is one of the founders of the popular online channel Periodic Videos that familiarizes its viewers with the chemical elements. The channel’s team had made a video to note the beginning of the International Year of the Periodic Table which was also shown at the conference.

In addition to Sir Poliakoff, a number of other scientists from around the world spoke to the audience on the second day of the conference, including Professor Pekka Pyykkö from the University of Helsinki, who spoke about the inner mechanisms and the origins of the periodic table. According to the Finnish scientist, Mendeleev’s fundamental achievement was preceded by other attempts to categorize chemical elements based on their physical properties. One such example was Johann Wolfgang Döbereiner’s concept of triads. In 1817, the German scientists had found that strontium possessed properties similar to those of calcium and barium. By 1829, he found more examples of three-element groups. Thus, the triads. In 1862, the French geologist Alexandre-Émile Béguyer de Chancourtois proposed a system for organizing the chemical elements based on the measurement of their atomic mass: the “telluric helix” (vis tellurique).

In the 1860s, Julius Lothar Meyer and Dmitry Mendeleev presented their works on their periodic table; later, they were both awarded a medal by the British Royal Society. Mendeleev, adds Pyykkö, also predicted the elements that had not yet been discovered: scandium, gallium, and germanium.

“I have respect for the researchers who look towards the future. The Russian crystallographer Alexander Kitaygorodskiy said that there are three kinds of theories. The first kind predicts, the second forbids, and the third explains. Personally, I value the first kind most,” notes Pekka Pyykkö.

Professor Igor Dmitriev of the St. Petersburg State University, too, spoke about the history of the periodic law. He pointed out that Mendeleev’s works were inspired by the results of the 1860 Karlsruhe Congress and the works of Jean Baptiste André Dumas.

“In October of 1867, Mendeleev began teaching a course on chemistry for the first-year students of St. Petersburg State University. Naturally, he had to suggest something to his students to serve as a textbook.  Unable to find a suitable option, and spurred on by friends’ suggestions, he set out to write his own. That is Mendeleev’s own explanation. But there was another reason: money. By that time, he was married, had a son, and had another child on the way. He had also bought an estate near Tver that he wanted to renovate. All that required money. If he could write a good, thick textbook and reissue it every now and then, it could become a great source of additional income. And that’s what happened,” explained Igor Dmitriev.

The periodic law is one of the most peculiar laws, and the history of its discovery is peculiar, too. In his first publication, Mendeleev only uses the word “law” once, and in reference to a completely different concept. In saying “law”, he spoke about the dependence of an element’s properties on its atomic mass. The second statement, which is that dependence has a periodic nature, was a substantiation of the first. To Mendeleev, the first concept was much more important than the second.

Eventually, Mendeleev finishes his work, sends it abroad and becomes famous. And then he makes a decision that becomes his life’s greatest tragedy. After discovering a law of nature, any other researcher would have continued doing two things: debating and learning about the patterns in a system. Mendeleev, however, writes about pumps in his 1871 work diary. He becomes fascinated with another subject: world ether. Read more about Mendeleev’s life after the periodic table in this article by ITMO.NEWS.