Following the results of her internship at ITMO’s ChemBio Cluster, Veronika Elkina wrote a review of the multiple fields that promethium can be applied in. The article was published in Frontiers in Chemistry, a top-quartile chemistry journal. 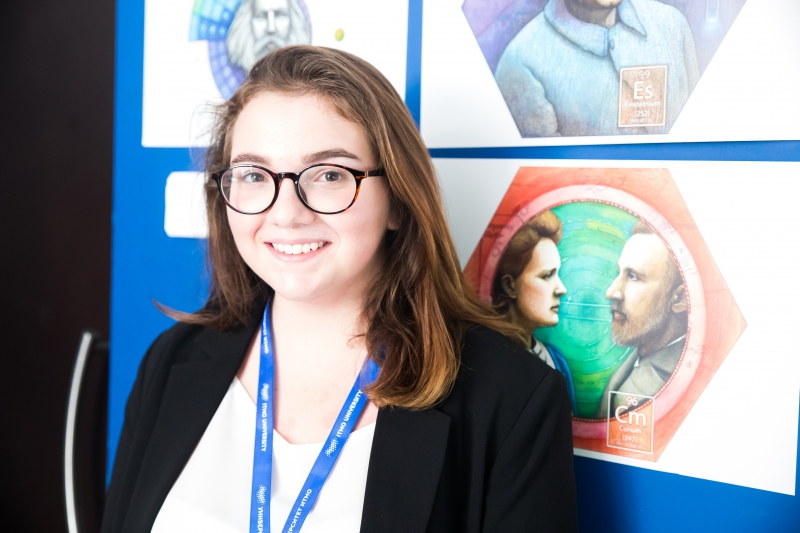 Many spend years doing research  to get published in prestigious science journals in their professional fields, but Veronika Elkina succeeded eing mentioned as the first author of a research published in a Q1 journal even before graduating from school. By now, she had already presented at the Mendeleev 150 international conference that took place at ITMO University. ITMO.NEWS contacted the young researcher and her co-author Mikhail Kurushkin, an associate professor at ITMO’s ChemBio cluster, and learned what the article is about, how much time it took to write and why Veronika decided to focus on science.

While Veronika Elkina is just 17 and hasn’t yet taken the Unified State Exam, her name is already known to chemists in various countries. Last year, she presented on the same stage with scientists who are leaders in their fields, and just a few days ago, an article was published in Frontiers in Chemistry where she is the first author.

It all began two years ago when Veronika, who studies at School #197 visited  an interactive lecture by Mikhail Kurushkin with her class.

“Our school collaborates with ITMO University, so we went there to attend a lecture on atomic structure delivered by Mikhail Kurushkin,'' remembers Veronika. “An international intern was present there, and as I know English well, we started talking.”

The lecturer noticed the student who had a good command of English and knows school-level chemistry well. In a year, he invited her to present at Mendeleev 150, an international conference dedicated to the 150th anniversary of the Periodic Table.

“I wanted to make it so that school students would present at the conference on par with other speakers,” comments Mikhail Kurushkin. “I remembered how Veronika proved herself during her previous visit, so talked to the vice-principal for education at her school, and offered her an opportunity to participate. Veronika called me back in several minutes and said that she was interested, and so we started getting ready for her presentation.”

Veronika’s report was dedicated to the history of the discovery of chemical elements. When preparing it, she had to immerse in this topic much deeper than the school program implies: it was necessary to study the history of discovery of all known chemical elements. In order to do that, Veronika studied serious scientific literature in English. She also repeatedly visited ITMO’s ChemBio Cluster for consultations.

“We gathered the most of the most interesting chemical elements, and drew up a chart: where, when, by whom, and how they had been discovered,” remembers Veronika. “We also had to add some information about the scientists who discovered or synthesized this or that element.”

Veronika also had to learn how to make a report and present it to the public in a very short time.

“Veronika did very good at the conference, and even prepared handouts, a periodic table where in every cell of an element, there was a flag of the country where it had been discovered,” says Mikhail Kurushkin. “This table became part of the participant’s package and went to some thirty countries after the conference. This is why now there are people all over the world who have Veronika’s table hanging above their desks.”

From report to article

Soon, the student got a chance to repeat her success. Scientists from ITMO and Lomonosov Moscow State University announced an open call for a joint article series for the Frontiers in Chemistry journal, dedicated to the 150th anniversary of the Periodic Table.

“Professor Kurushkin proposed that I write an article for a chemical journal as my internship, and I agreed,” says Veronika. “We wanted to write an article that had something to do with the Periodic Table, where we could tell about a chemical element in detail; we also wanted our research to be unique and have scientific value. This is why we chose promethium. There are many articles written about other elements, but few were written about promethium, and we got interested.”

Writing a real scientific review took a lot more time than preparing a report. In fact, the work went on throughout the previous academic year. Veronika had to learn the skills of working with Scopus and Web of Science, Kopernio and Mendeley.

“Nothing from what I had to find is taught at school. The very search for information, splitting it into two categories – what I need and what I don’t – was really different from what I did before,” comments Veronika. “At school, you use regular websites that appear on the top of your search results. Here, you have to search for information on specific websites, in specific archives, which are mostly in English. We searched for information in all databases and individual sources for the last 100 years. We wanted to track the whole history of promethium’s discovery in the smallest detail.”

A metal with cosmic prospects

The focus of Veronika’s article – promethium –is a grey radioactive metal which is almost never found in nature. It is believed that there is about several hundred grams of it in the Earth’s core. For this reason, it’s quite natural that it was discovered only in the middle of the 20th century. In 1945, American chemists Jacob Marinsky, Lawrence Glendenin and Charles Coryell extracted promethium from fission products of uranium fuel with the help of ion-exchange resins. The discovery was published only in 1947, as they were too busy doing military-related research during World War II.

“After the publishing of their research, scientists began to actively discuss promethium, and study its physical and chemical properties, as well as think about its potential applications,” says Veronika. “First, it found application in batteries, various communication devices, including those intended for submarines. Even biologists came up with some applications for this element. It turned out that it was also quite popular in the USSR.”

But soon, proethium’s popularity dwindled: there were too few stable isotopes of this new metal, and it became replaced by other materials.

Still, promethium wasn’t forgotten. Scientists believe that it can still find its application; Veronika and her mentor dedicated a whole section of her article to this topic.

“Promethium’s future is associated with various space exploration expeditions,” explains the Veronika. “It has mild beta radiation that makes it possible to simulate the conditions that a crew will face in space here on Earth.”

In the course of her work on the article, Veronika did not just get the experience of doing research, but also got to know the complicated process of publishing a research article. The manuscript was returned over and over again in order to work on various flaws.

“They asked us to clarify many details, some proposals seemed not entirely correct to the experts, one reviewer sent back as much as 24 remarks,” says Veronika.

The authors decided to approach the making of a “graphical annotation” in quite an original manner. It depicts Prometheus as an astronaut on the Moon, equipped with various attributes that give hints on the material’s applications.

The article was published on June 8, becoming a graduation gift for Veronika.

“This is a full-fledged review that summarizes all existing literature on promethium,” says Mikhail Kurushkin. “Now this work has become an ideal source of information for anyone who decides to acquaint themselves with this element. In essence, it covers everything there is. Before, information on promethium was really disorganized.”

A look into the future

Veronika says that she wants to pursue a career in science. She acknowledges that this decision took time: starting with her 9th grade, she has been torn between the professions of a doctor and a researcher, but in the end, she chose the latter. Her short-term plan is to enroll at ITMO University.

“I’m planning to join ITMO University via the ITMO.STARS program,” she says. “My portfolio will include my participation in Mendeleev 150 and the article that has just been published. But for now, what I really need to focus on is taking my exams and getting the points I need.”