The 29th Winter Universiade has recently ended in Krasnoyarsk. This event, which takes place once in every two years, is often called the Olympics for young people. ITMO University student Vadim Shvedov participated in its curling competitions held on March 2-10. Upon his return from Krasnoyarsk, he spoke to ITMO.NEWS about the difficulties their team had to face, and how knowledge in the field of advanced mathematics helps play curling. 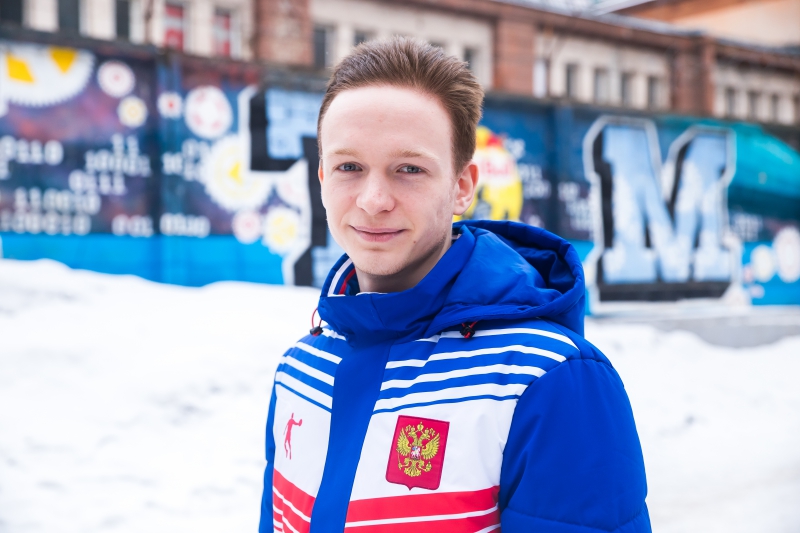 How did you pass the selection for the Universiade?

Two years ago, we had the Student League in curling, which is a championship between students from all over Russia. It was possible to participate as part of one’s university team, but ITMO didn’t want to form a curling team, so we decided to gather a regional one. That time, we came in second, and this year, we were first. We also learned that only two teams will take part in the selection for the Universiade: ours and the one chosen by the Russian Curling Federation.

The selection procedure was very challenging. We had three victories in a row: the first game was an easy one, but then we lost the second. We had to play the third game on different ice, and we lost it. In the fourth game, we had a bad start, and when the score was 11:4, we thought that we’ll have to try again next year. But we still made a great comeback and won by 12:13. This motivated us to beat our competitors in the final round and pass the selection.

Which part of the competitions in Krasnoyarsk was the hardest?

The most difficult issue from the psychological standpoint was playing with microphones attached to our collars, being filmed, streamed and all that. It was hard to loosen up and play like we’re used to.

During some of the games, the ice was an issue as well. The quality of ice is very important in curling, we can’t play equally well on different kinds of ice like hockey players do. Ivan Yarygin Sports Palace is a huge site, and the temperature there is quite high, which can have a bad effect on the ice. For this reason, the team of ice-makers decided to cool it more than they do usually, and sometimes it got too frozen. We expected it to be different, and particular moves that we were used to just didn’t work. And our competitors knew how to adjust well.

The Universiade is not your first major competition. Where else did you play?

We also went to a training camp in Japan, where they had high-quality ice and great teams. There aren’t many curling teams in Japan, but all of them have a great level of training, and playing against them was a fine experience. Shortly after that, we went to a camp in Canada, and participated in four competitions in just a month’s time. The Canadians are the trend-setters in curling, their level is so high that preliminaries in provinces are already very difficult to pass. So, we got to play against many good teams. Even when we lost, we got to learn on our mistakes, and we took best practices from every team that we played with.

How did you pick up curling?

I started some five years ago. At that time, I already dropped figure-skating; I took part in some ice shows, but that was too boring, and I dropped it as well. So my sister, who’s currently studying at Lesgaft National State University of Physical Education, Sport and Health, asked, “So what now? Are you going to just sit at home?”, and advised me to try curling. I gave it a try, and liked it.

Curling is often called chess on ice. Is it really so?

Yes, it's a catch phrase. In a curling team, you have a captain (called skip or skipper) who stands in the house (target area) and decides on the team’s tactics. Other players also follow  the game’s development, and give advice to the skip (all in all, there are four players in a team: skip, lead, second and third – Ed.).

The game’s tactics can be quite complex, as there are many possible combinations. It’s not exactly like in chess; in a sense, curling is more difficult: while in a chess game, a knight always moves in a L shape, and so on, in curling your stone can stop five or ten centimeters off in an unexpected direction. And it can be really hard to account for that. Also, you have to readjust really quickly, think fast and allow for all possibilities.

What is it that you like most about curling?

I am the team’s second, i.e. the one who does the power throws and aims to take out our opponents’ stones. And when I see a difficult, interesting throw and perform it, I feel on top of the world.

On the other hand, I’m also a sweeper. And when the captain makes the last throw, and you have to bring it to the center, and you sweep like hell and it finally stops a centimeter closer than your opponent’s stone, you all shout for joy. This is the real drive of curling, though not everyone understands it. You may think that the game goes smooth, but then everything changes, and you get full of emotion. Coping with the ice, calculating your opponents’ steps and solving difficult tasks: that’s what I like about curling.

How much time do you spend on training?

I train five days a week for two hours on ice. Also, I go to the gym, as curling requires much physical strength, especially if you’re a second and have to sweep a lot.

Are there any good places to train in St. Petersburg?

Unfortunately, we don’t have a specialized ice rink in our city, so we have to train at shopping malls. In fact, there are only two sites that we can use, each has one full-sized sheet and one that’s smaller, either too narrow or too short. The quality of ice is also a problem, as those are shopping malls, and you can’t maintain the necessary microclimate in such places. We’ve been asking for a special rink for a long time now, but we are yet to make any progress in this regard.

Do you think this is because curling is not as popular as, say, hockey?

No, I don’t think so. In other regions, curling is actively developing, and they build good rinks there. For example, there are great sites in Yaroslavl and Novosibirsk. We trained for the Universiade in Sochi, at the Olympic Stadium, which is still used as a site for curling, and their ice is among the best in Russia. Our other training camp was in Novosibirsk.

I don’t know why they don’t build a rink in St. Petersburg. I suppose it’s because we play well as it is. At the Universiade, there were two Russian teams, and 90% of members were from St. Petersburg. So they might think that we don’t need a special place to train because we’re this good without one. And as result, we have to win on sheer willpower.

Do you think curling can become as popular in Russia as it is in Canada or Norway?

I think that you can’t accomplish something like this thanks to sports achievements only. For example, Alexander Krushelnitskiy and Anastasia Bryzgalova showed great results at the 2018 Winter Olympics, but people didn’t start watching more curling, maybe only a bit and these sportspeople only. Anna Sidorova’s women’s team was also among the top players worldwide, and there were fans of them in particular, as well.

On the whole, few people in Russia watch curling. I guess they appear thanks to such events as the Universiade, or when there are more broadcasts. For example, at the Universiade, the host asked the audience before every game, “Is it your first time at a curling game?”, and most answered “yes”. Some even came to us afterwards and said something like “Thank you, we’ll now watch curling, it’s a very interesting sport, we’ll be cheering for you!”.

Apart from doing curling, you also study in the fourth year of ITMO’s Applied Mathematics and Computer Science program. Why did you choose it?

Funnily enough, that was a random choice: I never analyzed every opportunity like my peers did, but I don’t regret my choice in the slightest. I am where I want to be. I’ve liked mathematics since my early years, and when I was finishing school, I also picked up programming. I came to understand that I like working with machines more than with people, and so I chose applied mathematics and computer science.

I really like my field because we research ways for solving complex tasks, look for new approaches and models. I think that focusing purely on coding is boring, and I like to solve problems and look for new solutions that are quicker and more efficient.

Does your knowledge of mathematics help you with curling?

Yes. The approach we use for solving tasks in mathematics can be applied to solving tactical tasks in curling. We can’t do much without numbers, and we make use of data and statistics: for example, we track the stone’s movements, monitor the sheet’s condition and even count the percentage of successful throws. We also analyze our opponents’ performance: numbers can tell a lot about their weak points. Keeping all of that in mind can be hard, but I manage to do that: in the end, I’m a mathematician, and working with numbers is part of my job.

What do you plan to do in the future: work in your professional field or focus on a career in sports?

I hope I’ll manage to do both, like I do now. You know, many people in Canada are successful at it. Here in Russia, people believe that if you’re a sportsperson, you focus on sports only. The Canadians have it differently: you finish your work and then go to a curling club to throw stones for some couple of hours. Eventually, you gather a team, go to some championship and win it.

And what about you short-term plans?

In two years, I want to go the Universiade again; it’s a grand event that you want to return to. Also, I’ll still be young enough to participate. We also aim to become Russia’s national curling team. We train a lot, and grow stronger with each passing year. Starting with this season, we’ll be competing in the major league of the Russian Championship, where we’ll be chasing a playoff spot, as it is the award winners of the championship who then go on to compete for the right to participate in European and World championships.