Mamadi Berete: At ITMO, There Is No Difference Made Between Foreign and Russian Students

Mamadi Berete comes from Guinea, a west-coastal country in West Africa. The country is sometimes referred to as Guinea-Conakry to distinguish it from other countries with "Guinea" in the name. Guinea has a population of 12.4 million. He is currently getting his Bachelor’s degree in Info-Communications Systems Programming. 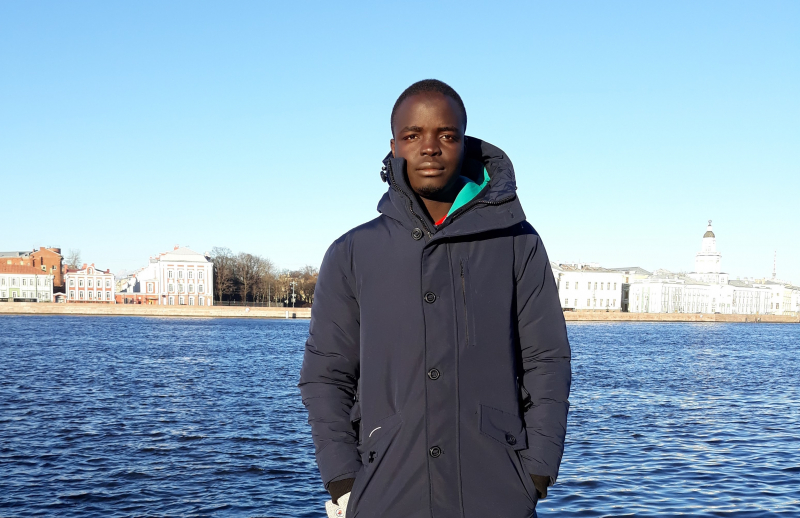 What do you like the most about info-communications systems programming?

What I like about my program is that it helps the students acquire both practical and theoretical knowledge in the fields of networks, web development, databases and mobile applications.

How important do you think this field is and how can we see it being developed in the future?

This field is of very great importance especially in today's world: the contribution of new information and communication technologies to development processes and territorial dynamics is at the center of many debates, both with regard to information control and the reduction in spatial distances it would allow. It constitutes a vast field, which includes practically all the technologies that make it possible to store, receive or transmit information in any form electronically.

I think this area will develop even more in the future because as communication, transmission, processing and storage of data and information are one of the most important things in the world, specialists will always try to make it faster and more efficient. In this area, the future has already started with the creation of 5G.

What do people often tell you when they learn where you’re from?

When people learn where I come from, they usually ask questions about my country. There aren’t many people here who know Africa very well, so they don't tell me anything new, they just ask questions over and over again. But I like to answer these questions because when people ask a lot then that means they are very interested.

Can you tell us a bit about your hometown?

My hometown is called Siguiri. It's one of the biggest cities in my country. Siguiri is a city in Northeastern Guinea on the River Niger. That's where I went to primary and secondary school. It’s known for its goldsmiths.

Could you share what was on your mind before deciding to come to Russia? Did you have any fears or dreams?

Before coming to Russia, I really just wanted to go to either France or the USA for my studies. In those countries, I would never have a language problem since I already understand French like my native language and I also understand English at a relatively basic level. Russia wasn’t even on my mind. But when I decided to come here, I realized how much it made me grow. One of the main reasons I didn't want to come to Russia was because I didn't speak any Russian, and to study well you really have to understand the language in which you study. I was afraid of this language barrier.

It’s a university with an incredibly wonderful organization, with its student clubs and an efficient administrative structure, initiatives of scientific research and enormous possibilities of opening to the world through its partner universities. In addition to all this, it is a university which is open to international students. Here, there is no difference between a foreign and Russian student, there's no difference between foreign and Russian students apart from the language barrier. That is exactly why I was afraid to come to Russia.

I chose ITMO for its educational program in the field of technology, because when I was in my country, I learned that ITMO is one of the best universities in Russia and it was several times champion of programming.

It is knowing exactly what you want, because if you have a clear idea of what you really want it will be easy for you as a student to direct all your energy into this area. I know that most people believe that what makes a good student is good grades but for me it's different. Even if you have very good grades, without knowing exactly what you want, it will be hard to find your way in the professional world that awaits you after university.

What type of art inspires you?

The pieces of art that have most influenced me as a person are philosophy books, for example, Jean Paul Sartre’s "Existentialism is a Humanism" and "The Social Contract or, Principles of Political Rights” by Jean-Jacques Rousseau.

If you really want to study in a country whose language you don't understand, you have to start learning the language in your home country first, because it will be difficult and you will have more things to study besides your normal subjects. Communication is the most important thing in life. When you understand the language of a community, a person or any social entity, in spite of the difference in cultures, you will have no trouble making yourself understood, expressing your ideas and also integrating easily.