2021 is the Year of Science and Technology in Russia and the spring of 2022 will mark the 350th anniversary of the birth of the first Russian Emperor and the founder of St. Petersburg – Peter the Great. Inspired by these events, ITMO’s Center of Social Sciences and Humanities has developed an interdisciplinary educational and research project dedicated to the flourishing of science during the reign of Peter the Great. Read on to learn why the project will be interesting for everyone, from programmers to opticians, and how it will help bring various fields closer. 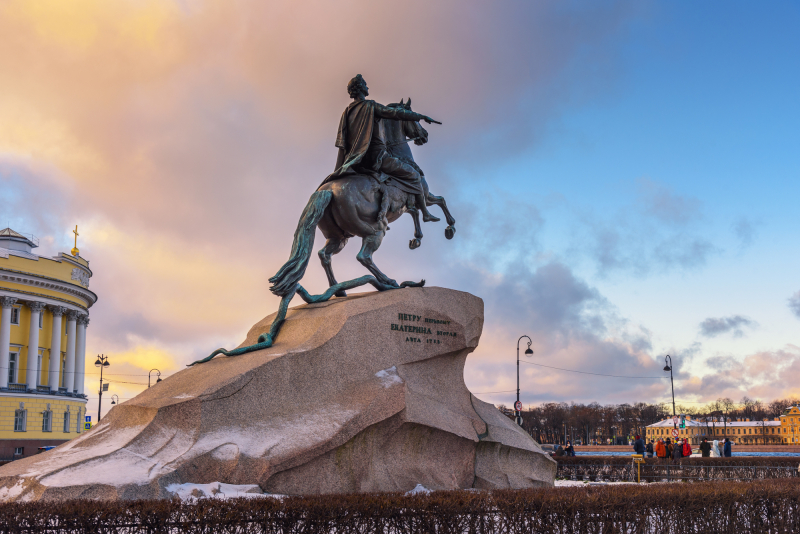 The Bronze Horseman – a statue of Peter the Great by Étienne Maurice Falconet in the Senate Square, St. Petersburg. Credit: depositphotos.com

The historical path of science

In 2020, ITMO’s Center of Social Sciences and Humanities launched the TECHNOHISTORY project with a view to demonstrate how scientific discoveries influence the historical process. The mission of this year’s project called PETRO pr(i[t]mo): the scientific and technological legacy of the Peter the Great epoch is to highlight the significance of the emperor’s reforms in the development of the country and the lives of modern people.

The ITMO.Expert platform gave the start to the idea that brought together not only the university’s history teachers and the Center’s employees but also lecturers from other universities and museum staff. Nevertheless, it's students who are the heart of the project. Initially intended for first-years, the project now aims to draw the attention of various ITMO lecturers and students.

Due to its interdisciplinary nature, the project helps participants to not only immerse themselves in history but also to follow the path of scientific development and figure out how their technical expertise can find its use in the humanities. It blends both R&D activities and off-site training, including open lectures, contests, and presentations at the Tochka Kipeniya (Boiling Point) coworking space and ITMO’s campus on Chaykovskogo St. 11/2. The ultimate goal of the project is interdisciplinary products created by teams that will be presented at a youth conference in honor of Peter the Great's 350th anniversary of birth.

“We strive to help our students grow personally and acquire a value-based perception of history. That’s why we always seek new work formats, of which project activities are one of the most demanded. We also wish that human sciences gain a significant role at tech universities, too. And here interdisciplinarity and digitalization are our key helpers. The project functions on the Discord digital platform where visitors can freely sign up for various tracks and share information. Mini-groups use other platforms, too. Lectures are recorded via Zoom and then uploaded on YouTube. The final product will be also presented digitally,” comments Galina Zhirkova, the head of ITMO’s Center of Social Sciences and Humanities.

From a foundation stone to a world-class modern city

The project encompasses several theme-based tracks. The first track named Engineering: History and Practice (heads: Dr. A. Vasiliev and Dr. A. Belousov) studies the formation and practical application of engineering during the reign of Peter the Great. In the course of the track, students are offered to explore the topic by designing a navy, water fountain equipment, and fireworks devices.

During training in the second track (head D. Vycherov), students will learn how Russia’s first emperor supported science. In particular, the track will focus on the scientific expeditions to Siberia and the Far East, the exploration of the Ural Region and the study of the Caspian Sea, as well as the establishment of the Russian Academy of Sciences and the opening of the first Russian state public museum – the Kunstkamera.

The image of the emperor in movies, literature, and other works of art is at the core of the Historical Memory track (heads: Dr. N. Bogomazov and Dr. G. Zhirkova). The course raises the question of what makes the heritage of Peter the Great relevant for contemporary people.

And last but not least, the fourth track gives an overview of St. Petersburg’s history and the creation of a new ethnocultural space (heads: N. Prigodich and D. Martynova). At the course Peter the Great’s Paradise and New Culture, students will obtain answers to multiple questions: How was our culture influenced by European traditions? What was St. Petersburg intended to be like? Which ideas came true? And what mementos remained from the epoch?

“We also plan to attract aspiring art critics and historians from other universities who will help us assess the final products from the aesthetic point of view, as well as collect materials and interpret them correctly,” says Daria Martynova, a lecturer at ITMO’s Faculty of Technological Management and Innovations and the course Peter the Great’s Paradise and New Culture.

Across all phones and browsers

Although students will continue their work till May 2022, they have already achieved certain results. For instance, third-year students of the Programming and Internet Technologies program, Igor Klyuzhev and Matvey Dudko, together with Polina Ilyina, a student of the Bioengineering program, are working on a mobile travel guide to the life of Peter the Great. The interactive map will include the emperor’s residencies across Europe, historical records, as well as route planning and favorites’ lists.

The residencies of Peter the Great will also be subject of the educational app for tourism created by Vladislav Skuratov, a fourth-year student at the Faculty of Secondary Vocational Education, who plans to assemble a detailed database with information about the residencies, their architects, styles, construction dates, architectural and technical elements, and so on. The database will offer a type-based search function and information output on the map of St. Petersburg and its suburbs based on user requests.

Vladislav’s colleagues are interested in creating educational information services. Leonid Zherebin wants to develop a website that will feature all the achievements of Peter the Great in engineering, science, culture, and economy. And Roman Panayot plans to present a testing service to assess the knowledge of students about the historical period, which will help teachers develop different types of test tasks: traditional and adaptive, deterministic and dynamic. The team is supervised by Igor Kotciuba, an associate professor at the Faculty of Technological Management and Innovations.

The project’s largest team, which consists of ten people, is developing an interactive app to recreate the history and look of the Summer Garden during the reign of Peter the Great. The app will let users create their own routes, as well as take on different quests and challenges. They will also be able to leave comments and pin their routes for others. While working on this product, the team members improve their hard and soft skills: they learn to work in a team, present their product, and work with information. Not only do they create the app and its features but also include historical references, too.

“Working on projects, students can dive deeper into the historical context and improve their analytical and critical thinking. The format also makes the history of our country more vivid and understandable. We hope that our students and teachers will enjoy the benefits of joint work and their products will be used by both the university and the city,” concludes Galina Zhirkova.