Marina Barantseva started out as a professional linguist and translator and worked in marketing for ten years before deciding to completely reinvent her life. She followed her childhood dream to become a teacher; for the past three years, she has been teaching English to university students. Last year, she won the ITMO EduStars contest of best academic practices. In this interview, we asked her about the trick to motivating students to attend 8 am classes and the reasons lecturers need to continuously learn something new. 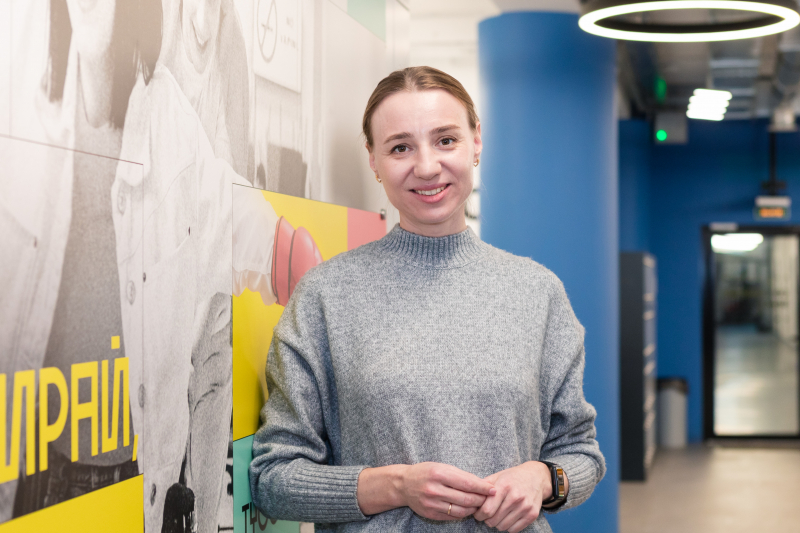 You worked as a translator and then as a project manager before taking up teaching. Why did you decide to change your career?

In the second year of my Specialist’s program in English and intercultural communication at the former Lomonosov Pomor State University (now part of the Northern (Arctic) Federal University – Ed.), I had a choice – I could specialize in either translation or teaching. Back then, the first option seemed much more promising to me, so in 2008 I graduated with a diploma in linguistics and translation. However, I didn’t get a lot of opportunities to put it to good use, because having spent a year working at a translation agency I transferred to marketing. For the next ten years, I promoted heavy machinery for the Russian timber industry and eventually became a project manager.

At a certain point I realized that I grew tired of this kind of work, I didn’t want to do it anymore. It was then, at age 30, that I remembered my childhood dream of becoming a teacher. I held my first class for young kids four years ago.

How did you come to work at ITMO?

In 2018, I participated in the conference ELF Upgrade: Practices and Innovations, organized by Macmillan at ITMO University. I really liked the way the event was organized and truly got into the university spirit. I remember sitting at the cafeteria at the Lomonosova campus and deciding that I didn’t just want to teach – I wanted to teach here, at ITMO. In six months, I was back at ITMO as a teacher at the university’s Foreign Language Training Center. Since then, I have mastered the communicative approach, attended about 20 conferences and seminars, took several courses, including one at the Norwich Institute for Language Education (NILE), and worked with students of all ages (4-50+).

Why did you decide to continue working with young adults?

When you first enter this profession, you get to experience everything. First, I worked with children, then school students, then adults and young adults. After two years of trial and error, I realized that I mostly enjoy working with a more adult audience, starting from 16 and older. With younger children you have to pay more attention to psychology and discipline, and with teenagers we can work as partners. I believe that teaching a foreign language requires equal contribution from the teacher and the students and when both sides stick to this agreement, it’s a win-win.

It might sound strange and hard to believe, but I like 99% of it all: starting from the wonderful, professional team and the convenient schedule to the well-equipped classrooms and the location of the campus. This job ticks all the boxes that I had outlined for myself.

ITMO also provides us with a wide range of opportunities for personal development. You would usually have to look for them yourself, but here you see so many options that you are forced to wonder why there are only 24 hours in a day. There is just no time to get bored with this abundance of courses.

But the main thing is the students. Each of them is unique and brings something original to our classes. It’s interesting to work with them even though I understand that they didn’t come to ITMO to learn English and become specialists in British or American literature. This is also part of the reason why I don’t want to additionally motivate my students – they are grown-ups and they make their own choices. If they decide that they need English as a tool for their career, they will be working hard and I will help them on the way. I have seen students go from A1/A2 to B2 in three years. They needed English for academic exchange programs, their work, or research articles. But if a student decides that they don’t need English, I won’t try to convince them otherwise – they wouldn’t have to work more than it’s required by the curriculum.

At the core of every class is a method, but another key element is the academic environment. This  is what I prioritize most of all – I have to create the most favorable learning conditions. That’s why my responsibilities during class are to help students, explain new material, check how they do their tasks, but at the same time I have to make sure to give them a lot of agency, otherwise they will be bored.

These days students won’t take part in a class if they don’t get any practical benefit from it – and that’s why I like them. Yes, they will hand in their assignments in time, but I have to be creative to keep them engaged and interested. That’s why it all starts with the method and the approach, and then I see if the class looks engaging. To a certain point, I am my own evaluator: I only introduce something I have tried myself and teach the way I’d want to be taught, too. Seems like in this sense we have a lot in common with my students.

I also like giving my students unusual tasks. For instance, this year I suggested that they write a “phone poem.” It’s a team task where you take one of the members’ phone number and write a poem based on it. For instance, if it starts with the numbers 911, then the first line will consist of nine words, the next two – of one word each, and so on. Or sometimes I’ll ask them to write an essay that must include a certain set of words. These students have a wealth of creative potential, and my task as a lecturer is to provide conditions in which they can fulfill it.

But it doesn’t always happen because every group is different. Still, you have to test an approach, modify it, and then try it again with the next group. And when I come to class at eight in the morning and see that the room is 80-90% full, especially in December, when they’ve already got enough points to score a grade – that’s when I know my work is not for naught and that my methods elicit a response from the students.

What are the challenges of your work as a lecturer?

Throughout 2020 (because of the pandemic) and for some of 2021 (because of redecoration) I had to work online and sometimes even combine offline and online classes because not all students were able to be there in person. It was a challenge, but a positive one: I’ve never seen such quick career growth. First, I taught students of different age groups. Once I had a firm grasp of that, online learning came in. And after I became used to that, we switched to the blended format, with some students in the room and some online, somewhere on the other end of the country, and I had to keep things dynamic for both groups.

In this academic year, the format has changed (right now, classes are held once per week for four academic hours instead of twice a week for two academic hours), and so has the size of the groups (up to 20-22 students). I’ve had to adjust the activities: include more group and pair assignments and carefully assess the dynamics to maintain the effectiveness of the classes. In other words, difficulties are a great stimulus for professional growth.

And how do you feel about the times when students don’t want to turn their cameras on during online classes?

It doesn’t scare me. Even if there’s just one face on the screen, that’s good enough. If they don’t want to, they shouldn’t. When I put myself in a student’s shoes, I’m not too keen about turning my camera on, either. I know how to check whether students are listening or not without it: they are required to provide feedback on the tasks via chat or the screen. If they fail to respond several times, I’ll know they’re away from the computer. Even when there are 20 students in a class, I’m able to keep track of everyone. Sometimes students are amazed that I can remember them all.

How has your life changed since winning ITMO EduStars?

First of all, I was pleasantly surprised, because at the time I had only been teaching for three years and, unlike my colleagues, didn’t have that much experience. But to me, it signified that I’m doing good at my job. I knew that I’m going in the right direction and it’s bringing results. I was also able to cover my own learning expenses.

It was interesting to check out the experts’ feedback after the contest. Right now, I’m already taking courses on a subject that they suggested I look into.

It was also great to hear feedback from students. Of course, they share their impressions with us at the end of the year, but it’s always great to hear their opinions when you’re not the one asking them and they can remain anonymous. It’s more honest, more objective. In other words, one benefit of this contest is the ability to receive independent feedback from experts and students and thus find new paths for development. Starting this year, I am also part of the pool of experts who visit classes conducted by contest participants.

On social media, you wrote that the contest was “the most incredible conclusion to the most unpredictable year.” What made it so unpredictable?

We didn’t know how the academic year would begin, online or offline, and that uncertainty was there until the very end. First, we had on-site classes, then we went offline. This flexibility that is expected of society must be a part of education, too. We need to adapt rapidly to respond to the needs of our changing world.

My original hobby was the English language, but it has become my profession. I love traveling and I agree that one day spent somewhere else gives you more than ten years at home. These days, when I have the time, I’ll watch a TV series in English or read a book. My most recent reads were two books by the British writer Rachel Joyrce – The Unlikely Pilgrimage of Harold Fry and Perfect.

It’s also important for me to maintain a healthy lifestyle. I bake my own bread and I walk 10,000 steps every day, changing routes every time to keep it interesting. My husband and daughter are into chess and volleyball; he’s a candidate master (a term used in the Russian sports mastery classification system – Ed.) of chess and for him, this game started as a hobby and became a job; she’s a third-class junior athlete (see previous note – Ed.), but her main sport is volleyball. She attends a sports school, goes to camps, and takes part in sporting events.