This spring ITMO hosted the first national Mega Contest, winners of which can enroll into the university’s Master’s programs without entrance exams. A total of 1,348 participants, Bachelor’s graduates of years 2020 and 2021 from various Russian cities, competed in 13 tracks, with only 41 of them making it to the top. The winners received travel grants to get to the Mega Forum, where they got to know the university, advanced their skills at workshops, and participated in a hackathon. 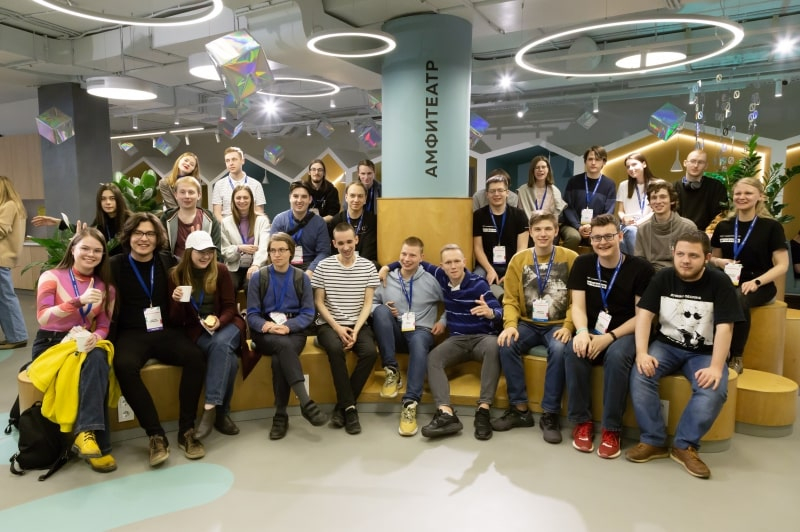 Workshops on soft skills and a farming hackathon

Over the four days of the Mega Forum, the participants were introduced to St. Petersburg and ITMO University – they enjoyed tours of various labs and departments, as well as presentations of different educational programs. Moreover, the students had the opportunity to chat with lecturers and visit their classes. For instance, researcher at the School of Physics and Engineering Nikita Olekhno shared his tips for scoring a research grant, while Daria Denisova, the head of ITMO’s Center for Science Communication, explained how experts should communicate with their audiences. At the lecture by head of the School of Translational Information Technologies Alexander Boukhanovsky the students learned more about promising AI technologies and the dangers they are associated with. Apart from that, the participants attended workshops, where they boosted their soft skills, for instance, learned to compile CVs and look for internships, as well as work in teams, make and deliver presentations.

“The Mega Forum is an educational event for Mega Contest winners that consists of several components. First of all, we award the best participants of the contest. Second, we introduce them to ITMO University and its departments, laboratories, and lecturers. As a result, our participants meet their peers and learn something new – this way, we encourage networking and generation of new ideas. Finally, we strive to present ITMO as an advantageous place for education, so that in the future these students would consider the university as the next step in their educational path,” shares Nikolai Pshenichny, organizer of the Mega Forum and head of ITMO’s Career Development Office.

For their final activity at the forum, in 8 hours the students had to develop a project for an energy-efficient, eco-friendly, and safe farm that can sew, grow, and reap the harvest with no human engagement. Several ideas were presented to the jury, including an automated hydroponic farm producing mushrooms, honey, and Zophobas morio. However, the winning idea for an automated mushroom farm was suggested by Nikita Buzhlakov, Polina Dubinina, Vyacheslav Strashilin, Rolan Shaifutdinov, and Anastasia Filatova, who were all awarded ITMO merch for their win.

“We had very heated discussions on the team when we were choosing the product we would like to produce before finally settling on mushrooms as an optimal solution that can also garner a good revenue. As we didn’t have a strict division of roles inside the team, together we researched the market to find a niche we could fit into, as well as the cheapest product to manufacture,” explained Polina Dubinina.

We asked other participants about their experience at the forum and plans for the future.

I am into physics and programming. In my first year I learned about the Mega Contest and decided to participate. I think my previous experience with solving tasks on neural networks and machine learning at various contests helped me win this one.

Thanks to the forum, I visited St. Petersburg for the first time and got to know like-minded people. On my team, there were people with different interests, including engineering, robotics, and biotechnology, so we learned a lot from each other as we were working on our project. I also really enjoyed Alexander Boukhanosky’s lecture on AI, as well as the opportunity to reach out to mentors at any time with any question about our hackathon project.

I won in the Computer Science subfield and ITMO is one of my choices for a Master’s program. Moreover, I learned that the Mathematical and Computer Modeling program at the Faculty of Control Systems and Robotics is close to what I am currently doing at my university.

winner in the track Computer Science

I really want to get into ITMO and I’ve been working towards this goal for quite a while. I first visited the university two years ago as a participant of the Programming and Information Technologies track in the I am a Professional contest. Then I spent one week at the university and I really liked both the campuses and the city; I knew I wanted to study there. I took part in various contests that grant entrance to the university without exams, including the Innovatics track of the Mega Contest. Even though I am training as a programmer, I want to try my hand in other fields. That’s why I think that completing my Master’s at the Faculty of Technological Management and Innovations will be beneficial for me.

I really like that ITMO focuses on soft skills and a new approach to the curriculum, unlike my university. Moreover, at the classes that we visited, we didn’t just listen passively to the lecturer – instead, we were discussing the topics at hand in a circle. And at the seminar on teamwork, we tried to build the highest tower from spaghetti and marshmallows. It was all really fun: an active dialogue that led to more engagement and benefit for the students.

Moreover, I really enjoyed the way we were treated by the organizers and especially Nikolai Pshenichny: his openness and sense of humor created a really welcoming atmosphere. After all, we came to St. Petersburg not only to learn, but also to meet new people and have a great time.

winner in the track Molecular Biology

I’ve been participating in the I am a Professional contest for three years now and I grew interested in the Mega Contest because its participants can enroll into ITMO’s programs without exams, as well as get a relocation package. I am currently considering two Master’s programs: Applied Genomics and Bioinformatics and Systems Biology.

At my university, I tried to get an enhanced stipend but after several failures I decided to drop it altogether. After Nikita Olekhno’s lecture on how to get a grant, my desire to compete for the stipend was rekindled. He illustrated his point with his own example, which is a great technique. Abstract numbers aren’t really persuasive, but he talked about the grants he won and the total amount of money he was able to earn. This was much more interesting.

I was also fascinated by the research done at ChemBio cluster, and I didn’t even know about some methods and phenomena that were mentioned at the lectures, such as DNA computers and bactofection.

winner in the track Software Engineering and Computer Technologies

Since ninth grade in school I’ve been engaging in various contests, and I keep finding new ones at university. I’ve already come to ITMO for the It’s Your Call! winter school organized in collaboration with Sberbank as part of the I am a Professional contest. So when I learned about the Mega Contest, I decided to take on this new challenge, too.

I won in the Software Engineering and Computer Technologies track and I am looking to get into one of the programs at the Faculty of Software Engineering and Computer Systems. I actually got really lucky because I was the only winner in this track who came to ITMO for the forum. This meant that associate professor Dmitry Muromtsev and several other lecturers took me on a personal tour of the faculty. Apart from that, I really enjoyed the lecture by Alexander Boukhanovsky, who I remembered from my first time at ITMO; he presents some facts ironically and others somewhat cunningly – I find it an intriguing way to teach a subject.

It turned out that Nikolai Pshenichny is also responsible for I am a Professional, which might not be surprising, seeing as these contests are similar. I don’t believe it is a coincidence that I am coming to ITMO for the third time already, it means that I like something here. And actually this something is everything – ITMO is a place that I want to go back to.