ITMO Quest: A Mysterious Haiku in the Streets of St. Petersburg

A mysterious haiku that appeared on billboards all around St. Petersburg led over 5,000 curious minds to a hardcore IT quest designed by ITMO’s experts. The first participant to get through all of the challenges secured the main prize – a place in one of the university’s Bachelor’s programs. 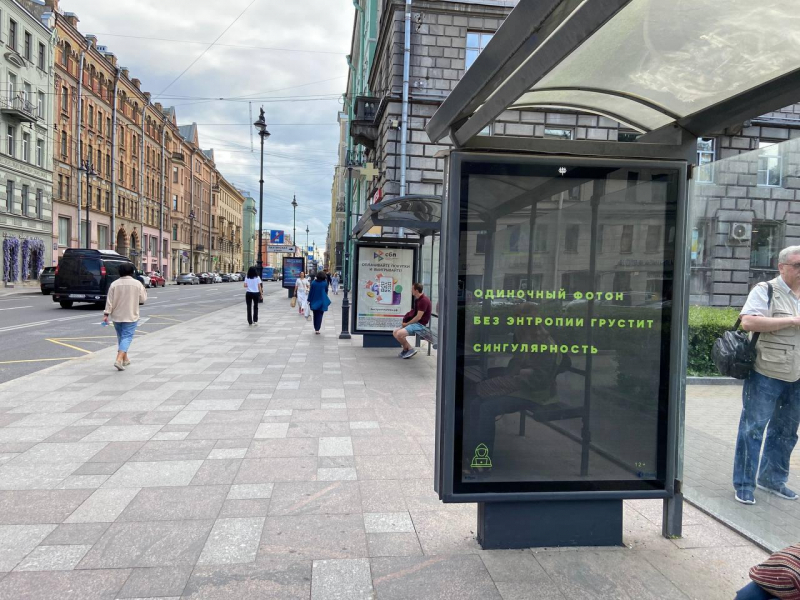 The haiku on the streets of St. Petersbrurg. Photo by ITMO.NEWS

On July 4, this haiku appeared on billboards, screens, and posters in the streets and spaces of St. Petersburg, including Sevkabel Port, Nevsky Prospekt, and many metro stations. The image didn’t have any links or QR codes – the first participants needed to google the phrase (in Russian) in order to open the first stage of the quest.

Googling the phrase led participants either directly to the website or to a video with the contest link in the description. On the website, each participant received an ID, a clue for the next step, and a link to the ECHO Telegram bot who would help them along the way.

“With this contest we wanted to show once again that getting into ITMO isn’t just about your grades and exam points. Our applicants are curious and ambitious people who love challenges and are ready to solve complex tasks in the real world. Through the posters we’ve also interacted with the city – we saw many posts about them on social media, people were trying to guess what this was all about. Science is closer than you think, sometimes you just need to dig a little deeper,” share the quest’s organizers.

The quest is designed in such a way that the solution to each step is hidden inside it, be that a website, an image, a downloaded archive, or a piece of code. In order to solve each task, participants needed to know cryptography, stenography, deciphering tools, formats, and methods, as well as basic web design, programming languages (for instance, Kotlin). Moreover, the quest tested their logical thinking and hinted at physics, chemistry, and information security, which are most of the courses awaiting future students at ITMO.

17-year-old Ilya Shapovalov became the first to complete all 15 steps of the quest, thus becoming the ultimate winner. He has been into computer games since the age of three and has already tried his hand at different programming languages. Now, Ilya has won the opportunity to enroll into any Bachelor’s program at ITMO via the ITMO.STARS initiative for students with unique personal achievements.

“I took part in the quest because I was bored and I love solving puzzles. I had a hunch about the prize towards the beginning but I didn’t think it would be true. Even now after winning, I find it hard to believe,  I feel as though someone might just say that it was all a joke. I worked so hard on my university applications, I had even come to terms with having to pay tuition, and then this happens… I knew what I wanted to study even before the quest: in early July I applied for Applied Mathematics and Computer Science. I think that this program will equip me with a great background for my future career in IT,” says Ilya Shapovalov.

Even though the winner has already received his prize, anyone can still test their skills and luck in the quest. It’s a great way to see if you know enough to enter ITMO or succeed as an IT specialist: the suggested tasks require thinking outside the box and not everyone will be able to get to the end.