The word “robot” was first introduced to the English language in 1921 by the Czech playwright Karel Čapek. His play, Rossum’s Universal Robots (RUR), explored the dark reality of humanity’s future if we build robots to do our bidding. Last Friday’s performance of RUR by ITMO students is one of the many projects and developments advanced by the Foreign Language Training Center, established just over three and half years ago. 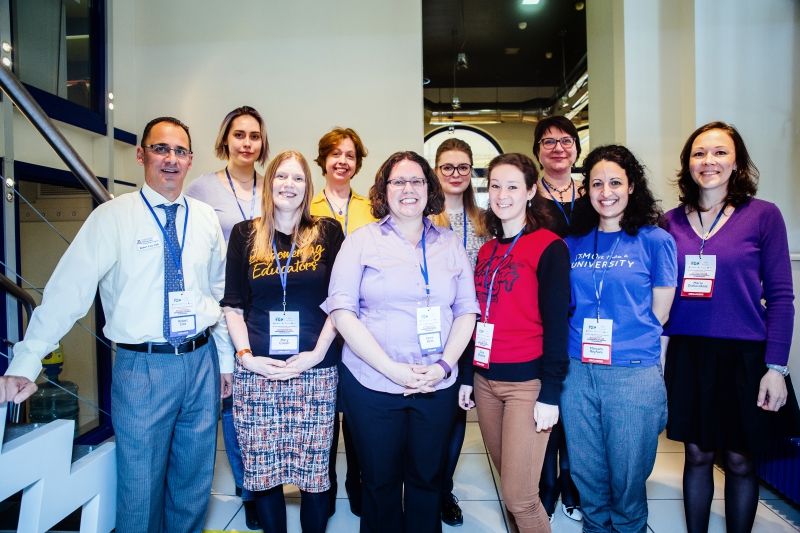 "It's amazing that despite the long hours, they still find internal drive for staging performances, for celebrating Halloween, for doing movie nights, all those extra activities that they aren't directly compensated for. The spirit of this group of people is amazing.” - shares Maria Didkovskaia, head of the Internationalization Department.

English speaking clubs and movie nights held monthly, Shakespeare’s Twelfth Night musical staged in English, a theatrical performance of Rossum’s Universal Robots… these are just some of the fun perks of creating a comfortable English-speaking environment at the university.  From a team of 7 to 60 in just three years is a huge achievement and has made a significant impact, in terms of language training, infrastructure, and internationalization, on the university as a whole.

“The best and highest achievement would be the positive feedback we get from the students, as well as the increasing number of students going for exchanges because they can,” shares Maria Didkovskaia.

When ITMO University became involved in Project 5-100 in 2013, it was set on a path of major internationalization, which required intensive English training for both students and staff, a critical factor for increasing student and academic mobility, and also widening researchers’ publishing opportunities.

“ITMO University is global, which is why we are working on internationalizing educational programs, so that more students can go and study abroad and experience this priceless opportunity. One of the major requirements for studying abroad is an adequate English proficiency level, so we started an intensive English language program at the university a few years ago,” shared First Vice Rector, Daria Kozlova, during an interview with Megabyte media in November 2016.

The Foreign Language Training Center was created in October 2014, and a trial group of about 100 first year students from the Faculty of Laser and Light Engineering were the first to be taken through this intensive English language program. Classes ran for 4 hours a week with another four hours a week of self study completely transferred to an online learning management system. This was a huge jump from the previously offered 1 hour of English a week. The entire approach to teaching was also reformed as teachers focused on a communicative approach and students were also given the opportunity to be taught by native speakers of English. At the same time, all university staff were offered general English classes to improve their language level.

By September 2015, the entire first year contingent of about 1,500 students was immersed in the new program and the number of English teachers rose to 16, supported by 4 administrative staff. Although the university was not yet physically ready for the volume of English classes, in terms of time in the schedule, classrooms and other reasons, rapid and significant renovations at the Lomonosova building since then have allowed for a substantial amount of new English language classrooms.

Today, in 2018, there are about 4,400 students from first to third year taught by 55 English teachers, 10 of whom are native speakers of English, from Australia, the UK and the USA.  All incoming first year students take an online placement test before the start of their academic year to help divide them into groups based on their level. English is now the one subject that unites all bachelor students.

“Native speakers are awesome! It's a great possibility to listen to the native accent and colloquial language,” says Svetlana Bormotova, a second year student from the Faculty of Infocommunication Technologies.

Joseph Taylor, one of our English language teachers from the United States, says,

“Teaching at a university has been an overwhelmingly positive experience, after working in schools and doing private lessons. What I like about teaching here at ITMO is that I am able to engage with my students in meaningful ways and have interesting interactions with them due to the fact that we come from different backgrounds and see the world differently. My academic career has been focused in the humanities and so I bring certain frameworks for looking at the world to class discussions, and students bring in their own, too. This allows for a productive environment for exchanging ideas, which is what university is all about. Of course, this can be difficult at 8:20 in the morning (or even at 10:00), so I use my quirky manner to keep students interested and motivated. Dancing and singing always help!”

“In September 2016, the Center started using the Empower book from Cambridge University Press as the main course for our bachelor students. One of the main criteria was the fact that the course is designed in the format of blended learning. The programme is covered in class with the students using the course books. Students also have individual access to an online workbook where they do their assignments, revise grammar and vocabulary, and practice different skills,” explains Anastasia Nikulenko, Academic Director of the Center.

A year later Cambridge University Press English Language Teaching (ELT) visited ITMO University as the university was included in an Impact Study on the Empower course. Teachers and students shared their views and experiences and a video was prepared (below).

Any student or anyone in the city who is interested in learning English further can also sign up for fee-based English courses and study with excellent English teachers.

More on how English is taught at ITMO and what kind of courses are offered to students in our next article!