The conference “Master’s Degree ++: Coding the Education of the Future” has recently wrapped up in St. Petersburg. Organized by ITMO together with the Vladimir Potanin Foundation, it brought together the winners of the 2018-2019 Potanin scholarship contest, experts from leading Russian and international universities, and representatives of federal and regional government agencies, business and nonprofits. In the course of three days, participants took part in discussions and workshops aimed at identifying the best practices in the implementation of Master’s programs in Russia and worldwide. 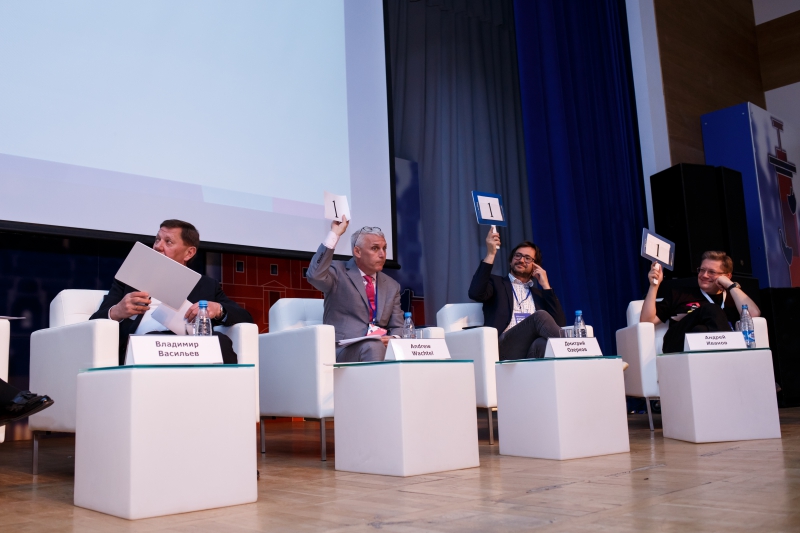 Plenary session of the conference "Master’s Degree ++: Coding the Education of the Future"

The program of the conference, which was this year hosted by ITMO University, revolved around comprehensive discussions of key questions faced by developers and lecturers of modern Master’s programs. Solutions to these issues aim to enhance the potential of students and develop the organizational forms of network and international cooperation of universities within the framework of Master’s studies.

As noted by ITMO University rector Vladimir Vasilyev during the opening of the conference, the discussion of the main issues of Master’s studies is especially topical in the light of the implementation of relevant national projects, in particular that of the national program “Digital Economy of the Russian Federation”, one of the main objectives of which is the development of highly skilled specialists for the digital economy.

“We see Master’s studies as the key support link in the training of highly skilled specialists. That is why today, it is especially important to maintain the exchange of the best practices and discuss our visions regarding the prospects and goals of the development of Master’s studies. Participating in this conference are top experts with a lot of experience of implementation of large-scale projects in Russia and on the global level. We hope that the entailing discussion will become a catalyst for the creation of new and effective tools for the advancement of Master’s studies,” commented the Rector.

Among the key focuses of the 2019 conference were the effective promotion and packaging of educational programs; interdisciplinarity as the creation and implementation of programs at the intersection of different scientific fields; the Soft-Hard-Digital skills balance within the framework of the introduction of new educational technologies; and identification of the best international practices in contemporary Master’s studies and the analysis of difficulties and problem points in the implementation of educational programs.

“This conference is particularly important in that it provides us with a rare platform for comprehensive discussions of problems of modern Master’s studies. This field is marked by active development and thus calls for in-depth reflection and analysis. We hope that the conference will give us the opportunity of looking at Master’s studies from a new angle, and will lead to many new accomplishments in the activity of each and every educator present,” said Oksana Oracheva, executive director of the Vladimir Potanin Foundation, while greeting the participants.

The conference opened with a day of practice-oriented activities for the winners of the 2018-2019 Potanin scholarship contest, during which they shared about the educational cases they worked on, as well as discussed the main trends of Master’s studies with leading international experts.

But it was the plenary session that became the central event of the conference. In addition to Vladimir Vasilyev and Oksana Oracheva, convening to discuss the changes the era of data and interdisciplinarity ushered in Master’s studies were Andrew Wachtel, the rector of Narxoz University, Vadim Volkov, the rector of the European University in St. Petersburg, Peter Sloot, a professor of the University of Amsterdam, Andrey Ivanov, the head of Department for Investment, Research and Education of the company JetBrains, Dmitry Ozerkov, the head of the Contemporary Art Department at the State Hermitage Museum, and Vasily Tretyakov, the CEO of the University of National Technology Initiative 20.35.

Private funds and education: why universities and charity foundations need each other

In her presentation, Oksana Oracheva touched on the important role charity organizations play in the support and development of education. According to the speaker, it would be wrong to compare the current situation with models of the past, for example, those of the Renaissance era, when benefactors and private funding were the main force in the development of education. Today’s education is larger in scale, encompassing all groups of society, and no nonprofit could ever replace the state in its development. That’s why the task of private funds and philanthropy in general has shifted to searching potential areas of growth and providing support to those who for different reasons can’t find it elsewhere.

“In my opinion, the main goal of private investment in education is to enable the opportunity to form the agenda for the future,” shared Oksana Oracheva. “To test different models, to carry out experiments, to establish a positive trend and progress forward. Unencumbered by limitations existing in the state system or the corporate sector, private funds can support initiatives that didn’t succeed in getting support in other places.”

She also added that education remains one of the most popular spheres being granted support, even though investment in this field is of delayed gratification. A benefactor can never predict the effect their funding will lead to. But from the Vladimir Potanin Foundation’s experience, it can be noted that the support the Foundation proffered to winners of the early 2000s scholarship contests led to some very positive results, highlighted Oksana Oracheva.

Competitive advantages of universities: ecosystems instead of institutions

In his turn, ITMO University rector Vladimir Vasilyev spoke about competitive advantages in the field of higher education, choosing a development strategy and the importance of universities’ social missions. He emphasized that in the current conditions, the competition in the field is not between universities but ecosystems that are formed both within and around them.

“People are the most important aspect at and for ITMO University. Students, lecturers, research staff, prospective students that are just applying for our Bachelor’s programs and graduates who we believe should stay in touch with their alma mater and contribute to its development; all of them also act as our partners who share our values and form part of the university’s ecosystem,” said the Rector. “What role does the university play in this ecosystem? Above all else, it should serve as a communicator between and integrator of all the groups involved in the educational process. And, without a doubt, it should actively carry its values and the mission it settled upon with all of its partners.”

Universities and companies: where employer dissatisfaction stems from and how to resolve it once and for all

The head of the Department for Investment, Research and Education of the company JetBrains Andrey Ivanov dedicated his presentation to the effective company-university interaction, as well as the topical questions of how to train specialists so that they won’t have to be re-educated for the purposes of real-world workplaces and what caused old models in which employers opted for distancing themselves from the educational process to become obsolete in today’s world.

Expanding on the first point, the speaker identified three levels of company-university interaction, which he dubbed the three levels of company maturity. At the ground-zero level common in the 2000s, the peak interaction was when a company went to a university and offer talented graduates jobs. But this model doesn’t work anymore, because the number of companies now largely surpasses the number of universities, and in the modern conditions of the constantly growing amount of information and knowledge universities simply can’t manage to give all these masses of knowledge and skills to their students. That’s why the likelihood of the situation where the interests of a company will match the knowledge a university provides to its students is very small.

At the second level of maturity, a company approaches a university with a willingness to cooperate but doesn’t yet know how to make this cooperation effective. But rising to the third level of maturity, it finally understands how to build this partnership in the most mutually beneficial way possible, and starts to develop the higher education arena together with the university.

“Companies, usually those at the ground-zero level of maturity, often complain that universities don’t do a great job at training Master’s graduates who join these companies. But in their saying that, they close their eyes to the fact that no one had a task to train students to suit their exact requirements. How do you solve this problem? If your cooperation with a university is at the third level of maturity, you start interacting with its students not when they’ve already graduated but from the very get-go. Such interaction can be of different intensity, ranging from offering specialized lectures and proposing relevant thesis topics to individual mentorship of students. If you pursue all this, they will make a great addition to your company by the time they graduate,” shared Andrey Ivanov.

It’s worth noting that starting from last year, JetBrains and ITMO University are implementing a joint corporate Master’s program in Software Engineering. Refer to this ITMO.NEWS article for more information about the program and the projects done by the students.

Universities and the online: why online courses will never replace real-world educators

Among the key speakers of the conference was Andrew Wachtel, the rector of Narxoz University, a member of the US National Academy of Sciences and an associate professor at Stanford University. The vast research interests of the expert span literature, history and politics of both Russia and modern Central Asia. Speaking at the conference, Andrew Wachtel shared his vision of prospects for using digital tools in education and explained why the online education format will never fully replace real-life communication with a lecturer.

“Online resources are only effective when used by people that are more mature both in age and in life experience. You can’t give a heap of learning material to an 18-year-old student and tell them to go and learn it on their own. Primarily because they’re not yet ready to do this. We have to help them socialize and give them the opportunity to work in groups, as they are not yet capable of finding everything they need by themselves. I am 100% sure of that,” he said.

According to the expert, online learning works best when a person already has some educational experience. Graduating from their Bachelor’s studies, young people begin to demonstrate a better understanding of the skills they will need in their future careers. That’s why at the Master’s level, it is fitting to offer students different educational trajectories for them to choose the one that interests them most.

Other topics discussed at the conference’s plenary session included interdisciplinarity and the necessity of joining different branches of knowledge together. As noted by Peter Sloot, a professor at the University of Amsterdam, though modern research tasks become all the more comprehensive and complex, the majority of research works still remain in the realm of the monodisciplinary. That is why educators have to take a different route in the training of young specialists by teaching them systemic thinking and preparing them for work in the cross-disciplinary frameworks, contexts and teams.

New educational formats at the intersection of different disciplines, as an example from humanities and technical branches of knowledge, were also the main topic of the presentations by the rector of the European University in St. Petersburg Vadim Volkov and the head of the Contemporary Art Department at the State Hermitage Museum Dmitry Ozerkov. The plenary session of the “Master’s Degree ++” conference was also attended by the CEO of the University of National Technology Initiative 20.35 Vasily Tretyakov, who shared about the implementation of a global project aimed at training of future leaders of companies to participate in the National Technology Initiative, as well as of specialists to work in new global markets.