Over the course of a week, participants from Russia, the USA, China, India, Kazakhstan and the Philippines studied new materials of biological origin and how they can be applied in contemporary art and design. An online exhibition of the participants’ artworks was opened following the school’s results. 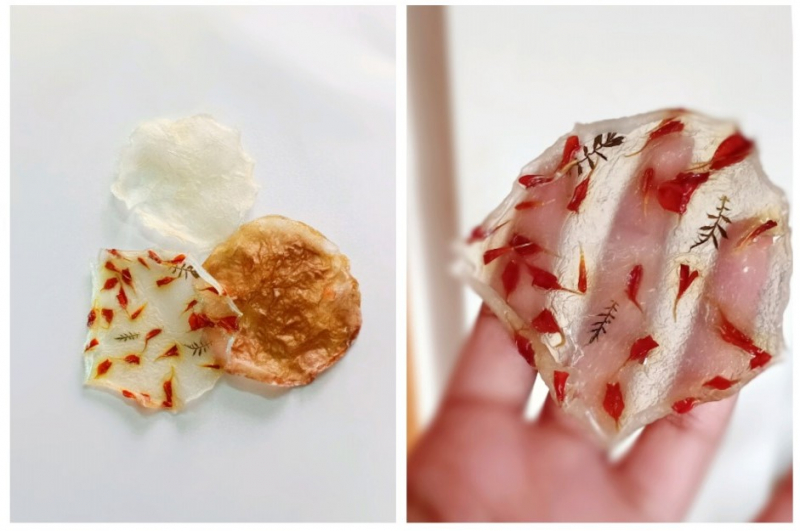 Can tea fungus become material for an art object? How to make an artist’s DNA part of their work? These and other questions were discussed at the first summer school conducted by ITMO’s Art & Science Center that was dedicated to bioart.

“The summer school’s goal was to get everyone willing better acquainted with what Art&Science is, and its various fields,” says Aliya Sakhariyeva, Head of the Art & Science Center at ITMO University, “this year, we decided to start with bioart, a topic on which we had workshops in February that had been a success. What’s more, the topic of bioart is very relevant this year. We wanted to gather everyone in St. Petersburg, give them an opportunity to work in a laboratory, but due to the current situation, we had to switch to an online format. Then again, this gave the participants an opportunity to create mini labs at their homes.”

Laura Rodriguez, artist, biotechnologist and graduate of ITMO’s Art & Science program, acted as the lecturer. During the seven days of the course, she spoke about what bioart and biodesign are, the difference between them and which materials they make use of.

“At the first lecture, we spoke about what bioart and biodesign are,” explains Laura Rodriguez, “bioart is a field of art, it is self-expression and has to do with philosophy. Biodesign is more about industrialization and the use of new biomaterials.”

Later on, the school’s participants acquainted themselves with various materials that can be used in bioart and biodesign. Students were told about working with kombucha (or tea fungus, as they usually call it in Russia), grow mycelium, that’s being actively used in constructing various objects, about creating cardboard from coffee grounds and nut hulls, and producing plastic from corn and potato starch.

“Such bioplastics have a comparatively short shelf-life, up to a year in a dry state,” comments Laura Rodriguez, “but an artist can make good use of that. These materials degrade in water, so they are very good for installations where they get gradually destroyed by a liquid. On the whole, if it’s art that we’re talking about, I believe that material can affect an art piece’s concept. For example, if you want to convey a message that has to do with the environment and pollution, the material you use to convey it is important. I think the same goes with science too. In their laboratories, scientists spend days searching for ways to ease the burden on the environment. But the same researchers create tons of plastic waste.”

After studying biomaterials, the school’s participants also learned how contemporary artists use the topic of DNA in their art. They were encouraged to experiment with cells containing their DNA.

“We took a hydrous solution in our mouth, which gathered various cells from the inner side of the cheek, then released it from the mouth,” says Laura Rodriguez, “mixed with a solution of cold ethanol, where DNA molecules, proteins and other substances that exist inside a cell formed a “cloud”. Well, that was not a DNA test that had a strict procedure, but it allowed our participants - artists, creators - to better understand what DNA is.”

Upon completion, the students presented the works that they created using the skills they got at the summer school. The exhibition was named “Fake it!” - you can take a look at it here.

“We chose this name because we had no time to create real artworks, so we decided to speculate,” says Laura Rodriguez. “We supposed that the artworks will be presented as existing projects, but in reality, they are not functional or even possible. Seeing “fake” opportunities can open a wide new area of creativity and inspiration.”

In their works, artists demonstrated the skills of working with transparent and opaque bioplastics, and DNA. One of the artworks shows how coronavirus would’ve spread throughout the world if it was physarum.

According to Galina Alferova, one of the students, participation in the summer school helped her “get rid of the fear of experimenting on her own, as it turned out that doing many things is quite easy”.

“It was exciting to delve into the interdisciplinary field of Art & Science which combines various fields,” she comments. “I had really good impressions of the school, and I got many ideas for implementing artistic projects of my own. I liked how they explained the material, and gave detailed analysis of every experiment. It felt as though I’m among friends, and I want to thank Laura for the great atmosphere and her sunny smile!”

Chinese student Jiawei Ding says that thanks to the school, she participated in an online exhibition for the first time in her life. “For me, this was a mind blowing experience,” she says.

“I really appreciated this bioart summer school, it gave me an opportunity to expand my horizons in a field that I’m very curious about. I would’ve really liked to learn more about it in the future,” she says.

The management of ITMO’s Art & Science Center was also satisfied with the results.

“I think that this was a useful experience, everything went well, and we plan to organise summer and winter schools in various fields of Art & Science, and each will be unique,” says Aliya Sakhariyeva