The participants who had passed the first stage got the chance to present their projects in front of the jury in person, while applicants from other cities will have the opportunity to do this during an online meeting. 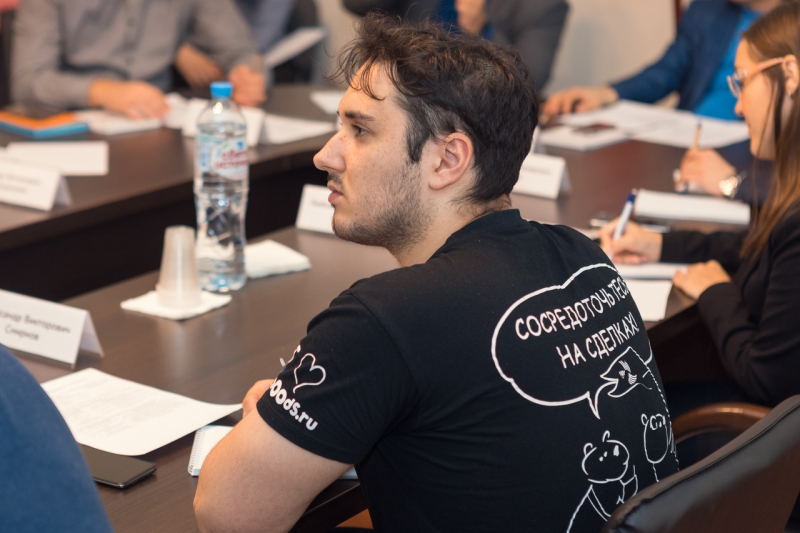 The onsite round of UMNIK at ITMO

Every year, the Foundation for Assistance to Small Innovative Enterprises organizes the UMNIK competition; in 2020, ITMO University was chosen for the first time to be the main venue for participants from all over Russia.

During the first stage, participants’ projects were evaluated by a group of ITMO University experts whose research interests lie in one of the competition’s six fields: AI, new manufacturing technologies, the Internet of Things, robotics and sensorics, 5G communication, and satellite communication.

All in all, 60 applications were entered into the competition, including some from Moscow, Samara, Kazan and other Russian cities. Only 25 of them entered the final stage – and now the participants have to demonstrate not only the scientific and innovative aspects of their projects, but also their commercial potential and relevance on the market.

The business side of the project – the business model and understanding of the market and potential users – will be evaluated by a jury with not only ITMO University specialists but also business representatives and market experts: Sergey Lobkovsky, an economist at the Regional Foundation of Research and Technological Development of St. Petersburg; Mikhail Rayak, innovation advisor at ITMO Highpark, Alexander Belykh, a project manager at Ingria Business Incubator, and Alexander Smirnov, COO of Renca LLC.

The winning projects will receive grants for 500,000 rubles to complete their business strategy and verify their product’s relevance on the market. All winners will also have to complete the pre-acceleration program at the Foundation For Assistance To Small Innovative Enterprises. In the future, they will have the opportunity to continue developing with the START program.

ITMO.NEWS met the organizers and participants of the contest to learn about this year’s projects and the innovative ideas they are based on.

head of ITMO’s Department of National Programs and Projects, organizer of the event

ITMO University is a long-standing partner of Foundation For Assistance To Small Innovative Enterprises, and not only through the UMNIK and START programs. This year, ITMO University became the federal platform for the UMNIK competition for the first time – we were only responsible for St. Petersburg and the Leningrad Oblast before.

In order to win, our participants have to demonstrate not only the scientific validity of their technological solutions, but also their commercial potential and relevance on the market. They have to have a clear vision of their competing products, to know their niche and realize whose problem they are solving with their project.

As I see it, taking part in this competition is highly beneficial for students of various levels and young developers because this will be their first little bridge from fundamental research to business. I think that with ITMO’s active involvement of young people into technological entrepreneurship our lives will progressively get better because we will see the rise of new companies and workplaces and ultimately – the growth of our economy.

We really do see great involvement from our students, and we are happy to know that many of them understand the market’s inner workings and see the way their creations can be applied in the real sector.

head of ITMO’s Center for Project Development and Fundraising

Thanks to the Foundation, small innovation enterprises have the chance to go through the whole development cycle, up to entering the international market. UMNIK is the first step in this cycle for students working in research – it gives them an impetus to think about practical applications of their work. These 500,000 rubles in funding are meant to support them in creating a business plan and testing it on the market.

This is not a large sum but it is enough to make the first steps. They can then apply for START 1, where they can receive 2,000,000 rubles on a non-repayable basis for 1 year. In START 2, they can get 3,000,000 if they can attract just as much in investments. Then there is a whole array of programs and competitions. So this is only a kind of a springboard to help them move forward. And even if you fail completely after completing all of the planned projects, no one will say a word – but you still got the chance to try. And this is, of course, really great.

In my course at ITMO, I explain to my students how important it is to know how to raise money. With that, I always tell them that it shouldn’t be the sole goal. It can be earned by easier means than taking part in contests and developing technological projects. But it is vital that those projects are socially-oriented – if you don’t see any social benefit in your creations, they won’t be in demand in the future. Understanding that people need your creation and it meets their needs – this is the most important motivation for taking part in the contest and raising investments.

The system that we suggest consists of potentiometric sensors that react to the composition of the analyzed liquid – in this case, with urine. We then choose a machine learning method that would be best at classifying and will have the highest precision and selectivity.

We process the results obtained and determine whether the patient is ill or healthy. It’s important to underline that we don’t search for oncomarkers or measure concentrations of specific elements, but rather look at the general picture, the integral composition of the liquid – because the illness dramatically changes the urine’s ion composition. Thus, we are looking for hidden connections in data structure using machine learning.

There are no analogous devices in Russia or in the world. Express systems for diagnostics exist and they are in use, but they tend to have a lot of limitations and false positive results. They are also dependent on the stage of illness because they take into account the size of objects present in urine, which is a characteristic of later cancer stages. Our approach is more precise and it is independent from the disease’s stages. The machine learning models that we use process full data from the start and search for hidden structures without taking the stage into account. And that is why our method cannot be used to determine the stage – this is a screening, which allows us to inform the patient that there is something wrong.

I have been doing this for a year while our team has been developing the project for around five years. We have a working prototype based on prostate cancer, and we have already run clinical tests using the data from Kirov Military Medical Academy. We have processed 89 samples and proved the accuracy of qualification to be 97%. The current prototype that I developed will be used to study bladder cancer.

Project: design of an elbow joint assembly for a robotic shoulder prosthesis

I did my pre-graduation industrial training at the company Motorika. I got the chance to see how they work, immerse myself in the working environment, and figure out what’ll be in demand in the near future: what the market will be focused on, what the next generation of prosthetics will look like, and where one would be able to develop an innovative product that’ll meet the demands and improve the lives of people with disabilities.

My Bachelor’s and Master’s theses dealt with robotic limb prosthetics. As someone who plays a lot of sports and watches the Paralympic Games, I thought: why not help paralympic athletes live better lives?

The market niche for shoulder prostheses is nearly empty: there are only two companies in the world that manufacture them. First of all, those are complex contraptions that require large investments. Secondly, only a small percentage of amputees need shoulder prosthetics and the market is simply not large enough. Many companies don’t take on this subject because they don’t deem it economically beneficial. Besides, many companies are not yet large enough to take on such complex initiatives.

The elbow module will come together with a palm prosthetic. At the moment, such a prosthetic already exists and is made by Motorika. But it needs improvement in terms of electronics and the mechanical parts. I plan to spend another year on this. Then, I’ll apply for other grants so that I can bring this project to completion and begin trials.

The module will be controlled via electromyography sensors that monitor muscle biopotentials as well as through combined systems that’ll pick up signals free of noise and interference. There will also be a control system that utilizes the movement of the shoulder joint – this is important because it’ll prevent muscle atrophy, which is often a cause of issues with the entire musculoskeletal system.

Another thing worth noting is that our device will be cheaper than its counterparts thanks to the use of domestic-made parts and modern materials, as well as the automation of production.

Project: development of a Google ThreadSanitizer module for fuzz testing of multi-threaded applications

This software I’ve developed not only checks program code for errors, but also identifies the conditions in which the errors emerge and the types of these errors – all so that the developers can figure out where it occurs and which sequence of actions has led there. This is important in the development of, for example, financial applications, where every bug has a huge price.

The module is developed for the Google ThreadSanitizer software. What makes it different from the base program is that the latter uses standard algorithms to find bugs – those algorithms are, first of all, imperfect, secondly, only cover certain types of errors, and, thirdly, often result in false positives. We’ve fully redesigned the fuzzing module, included support for atomic variables, and improved the deadlock search algorithm.

In the future, we will further improve the fuzz testing module and enhance it with algorithms that will help preserve the sequence in which threads are executed. Right now, the module supports C and C++, but we plan to also add support for C# and Java.