By now you must have surely heard of eye tracking, whether it was in countless online challenges or in the description of one of ITMO’s own Master’s programs, but we bet this technology still has many surprises in store. In this article, we delve a little into how it works, where it is applied and what insights the researchers have gained into the way our brain works. 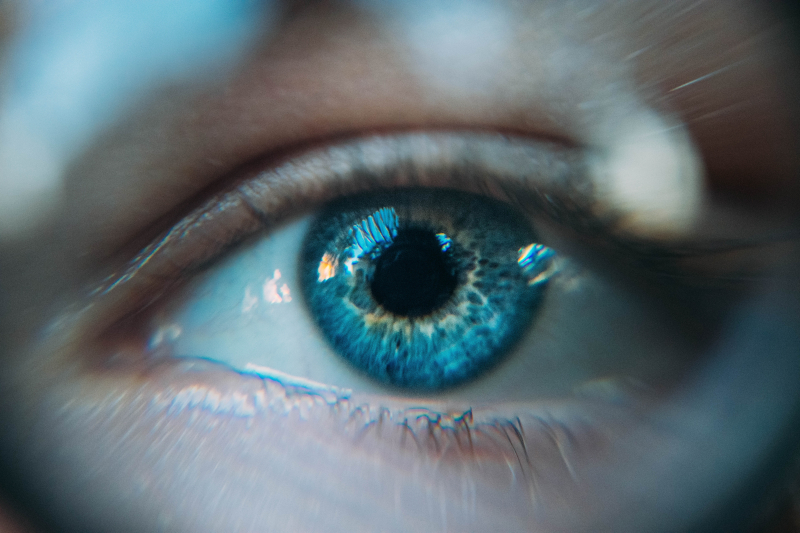 The thing with our eyes is that they are constantly making small indistinguishable movements in order to provide us with the best possible picture of the world around us. So, actually, even when you think you have fixed your gaze on a certain object, what your eyes are actually doing at that moment is criss-crossing mapping your surroundings with numerous little stops. These stops are called fixations and they last about 300 ms (milliseconds) on average when we’re looking at an image and a little less when we’re reading a text. The movements themselves are referred to as saccades and they can take from 20 to 200 ms – and the catch is that we don’t see a thing during one. Imagine how our brains are tricking us literally all the time making us believe that what we see is a smoothly running film with no blanks!

It is these fixations and saccades that are the object of eye tracking studies and research, as they are believed to reflect the many processes happening in our brains as we look at something and attempt to analyze it.

What exactly is eye tracking?

Now, I’ve called the movements indistinguishable before meaning that we ourselves don’t notice them – but a camera can, and unsurprisingly that is the main technology behind eye tracking. In most trackers these days, the camera is meant to catch the infrared light reflected from your eyes to determine where you look at each point in time. The more frames it can process in a second, the better quality data it can provide, and that is why one of the main ways to evaluate any tracker is by looking at its sample rate – the one available at ITMO’s program, for instance, is the Tobii X2-30 Eye Tracker with a rate of 30 Hz. Thus, it takes 30 samples per second, which is well fitted for analyzing eye movements in visual scenes, while the trackers used for reading have a rate of 500 or even 1000 Hz to catch the slightest change in the pupil’s location.

But if we don’t need that precision, then almost any camera can do the job, hence why online eye tracking challenges are becoming increasingly popular. You can feel like an experimenter or a market researcher yourself by simply downloading one of the programs available online and using it while watching a video, for example. What you are likely to get as an outcome is a heat map showing you where most of your fixations fell on. Be ready for surprises!

What can we learn from it?

Researchers from around the world still argue about what it is that attracts our eyes to a certain place – whether it’s the more shallow visual qualities of an object or the deeper meaning of it and its semantic qualities. So that is one of the ultimate fundamental questions that is hoped will get an answer with the help of this rather cheap and non-invasive technology.

Thankfully, even if we don’t know the master mechanism behind the laws of attraction of our eyes, there is still something to be learned from simply observing the objects they do get attracted to. Thus, from studying the way we read, for example, we can predict which words will likely be omitted, which mistakes will be missed and which words are highly likely to require longer fixations due to their complexity.

When it comes to images, the amount of predictions we can make based on accumulated research data is exciting. Thanks to previously conducted experiments, for instance, we can tell which areas of the screen will get the most fixations when using an app, and that can help us create a better user interface.

Using eye tracking in marketing, allows specialists to better advertise their products or locate them on the shelves in a more efficient way. The data can also be used in web design to create sites that are actually informative and helpful, so that all information is readily noticed and available. Moreover, knowing the way our eyes move in different states and moods can be applied in creating software that will, for example, alert drivers that they need to stop and rest, thus improving overall safety on the road.

These are only a few of countless applications of data acquired from eye tracking research, and we are sure to make new discoveries in the coming years.

Curious to read more about how our brain works? Here’s one of our articles on the topic.