Warm nostalgia, melancholy, new beginnings and jamming beats – you will find it all (and something more) in our musical recap of this month! 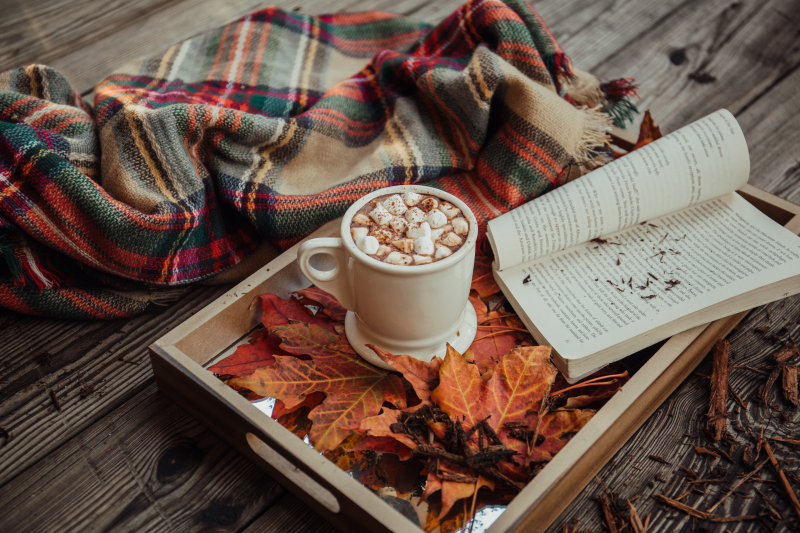 Do you feel September? This fresh smell of barely red or yellow leaves, rare but beautiful sun, and the feeling of the new beginning are already there. For me, September is always a new start: academic, seasonal, personal. And every new September I listen to two old Septembers: by Earth, Wind a Fire and the cover by the awesome German band AnnenMayKantereit. This song every time makes me stronger, even if I’m struggling to walk through Saint-P’s hurricanes (I thought I’d fly away like Mary Poppins!) or having the famous autumn depression.

Listen to good music and stay positive, warm, and try not to fly away!

I’ve been going back to the music I used to listen to as a teenager a lot lately. One of the most influential bands for me was Coil. They completely changed my outlook on music and, in a way, on the world, too. Their song that I listened to most this past month is called The Lost Rivers Of London. A network of hidden and forgotten underground rivers that flow below the crowded London was the source of inspiration for it. The song encapsulates this image perfectly, creating a mysterious and dark vibe – an echo of the world that lies beyond our daily life.

September means a new start for me, too, with a lot of new music. That is why it’s virtually impossible to choose just one song for today’s digest, but there is a theme – love in its various forms. James Blake’s recent release Godspeed captures the idea of acceptance and undemanding love with his “I let go of my claim on you”, a powerful line that I don’t think we hear often enough. I was very lucky to be sent another recent release, a Nothing But Thieves one this time, for which I am extremely grateful as I have been humming lines from Impossible ever since. To me, this one is about actually trusting love and the fact that you don’t have to lower your expectations, as the level of connection that you crave is possible with the one.

Finally, something less serious. Joji’s Sanctuary, filled with little effects and touches, has an easy flow with a cheerful vibe, and yet there is a message in it for true romantics – you never know how long your life will be, so love (and, well, do everything else) now, don’t hesitate.

I never can tell what kind of music I like – too much, too different, too difficult. But if I don't try to grasp the immensity, then I can tell I absolutely definitely like rhythmic stylish tracks with some ethnic originality, and at the same time an absolutely modern beat that makes you walk in step with the rhythm.

So, among plenty of others, this September I am listening to:

Wolf In Cheap Clothes by Kovacs

In The Grey by Mayssa

I think we all have those moments when we get triggered by a song, a tune that brings up pretty nostalgic and intense memories – your first heartbreak, struggles and challenges, travels, or moments of true happiness.

A few days ago, I was standing in line at a store, and the song Naive by The Kooks came on in the background. I hadn’t heard this song in years. Suddenly, I was overcome by flashbacks of people, places, and strong emotions linked to that song. This one actually set up my musical journey – that’s why I fell in love with music in the first place and don’t want to ever fall out of it. Since then, many things have changed, but I still get this warm feeling and even goosebumps when I hear the first lines of this song. And what songs spark memories for you?

A melancholic tune of this September is in the air, and succumbing to this mood, I couldn’t help pretending that joyful songs don’t exist in my playlist. Coming back home from work or university by a trolleybus, I used to sit by the window – do you know a better spot to hide from the world and listen to the music with a wistful look on? On this journey, my beloved company was Krakowski Spleen by Maanam. Although St. Petersburg reminds Krakow only if you keep your eyes half-closed, this song perfectly suits gloomy days, the grey sky of ours, and constantly changing but so familiar views of crowded avenues. A calm but moody voice makes you soak in your thoughts until a bracing chorus starts to wake you up. Luckily, sometimes the weather gets better and from behind the clouds appears the sun – not as cold as the one from the song.

Did you know that the origin of the “sound of the 80s” can be traced to just one song? In 1979, when Peter Gabriel recorded Intruder, a recording mishap resulted in a unique sound without which we might have never gotten vaporwave. And what kind of world would that be? Intruder is far from the happiest song – it’s macabre, creepy, and downright oppressive. But it’s just so good. To me, it’s a great example of how music can be so much more than sound – it can be an entire experience, and not necessarily a pleasant one!

On another note, if you don’t spend 2/3 of every September eagerly awaiting Demi Adejuyigbe’s new insane take on September by Earth Wind and Fire, then are you truly living? I don’t think so.