St. Petersburg is known for its many rivers, islands, and, consequently, bridges. You might think that winter is not the time for walking along wind-blown bridges, but who can really resist those Moon-like frozen waters surrounded by St. Pete's usual breathtaking views? So, here is my little guide for you, but with a little disclaimer first – this article is ever-so-slightly biased for I am a devoted Vasilyevsky Island admirer. Take this as a chance to get to know not only bridges, but also probably one of the cosiest islands the city has to offer – and enjoy! 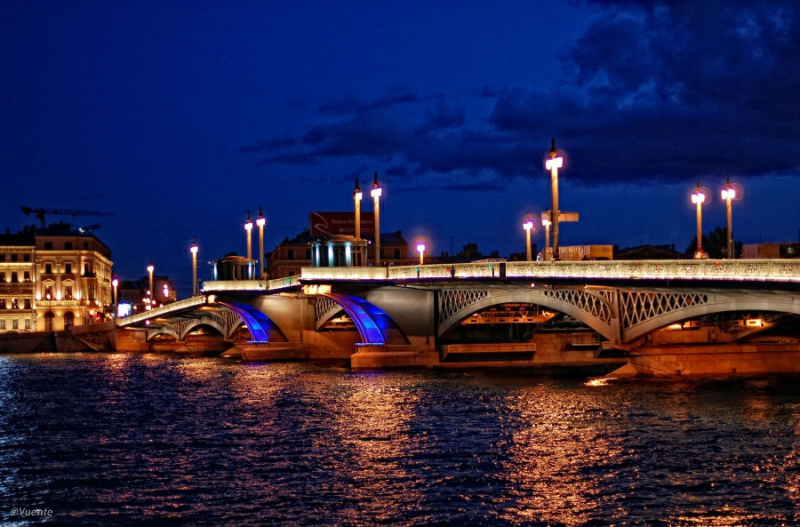 This is actually the first permanent bridge (i.e. that remains in place in all seasons) across the Neva River in St. Petersburg. It was built on the order of Nicholas I in the 1850s to connect Vasilyevsky Island to the central part of the city. Though it might seem a bit further away from all the glorious lights of Palace Square, it offers a sparkling overview of the typical tourist attractions such as the Peter and Paul Fortress or St. Isaac's Cathedral – as well as a romantic (in my eyes, at least) peek into the city's port. In warmer seasons, the embankment that the bridge leads to on Vasilyevsky Island is a popular place for long promenades, as you can come really close to the water. Here, you will find the perfect balance – just close enough to the hustle and bustle to feel involved yet undisturbed.

It's only right to continue with one of the city’s newest bridges, opened in 2018 and named in honour of Agustín de Betancourt, an architect who did a lot for St. Petersburg in the early 19th century. Apart from looking absolutely stunning, especially in the evenings, this bridge is equipped with a bike path and a pedestrian lane for those athletic romantics who can survive a walk there. Personally, I have admired the views during a car ride – and that's a lifehack if you don't want to explore some cosy but not so glamorous areas of the Vasilyevsky or Petrogradsky islands that the bridge connects. And in any case, you can always enjoy this stunningly modern construction from afar.

And this bridge, surprisingly, links the Vasilyevsky and Petrogradsky Islands. From the Exchange Bridge, we are first going to enjoy an overview of the entire Winter Palace ensemble attenuated by the Neva's far-reaching water. Then, it is always pleasant to look at that inviting corner of Petrogradsky Island, right next to the permanently moored ship-based restaurant. Grant another look to the Peter and Paul Fortress, which is a worthy destination, once you are off the bridge. And then turn around and let the Spit of Vasilyevsky Island bask in your attention, covering the Rostral Columns and the Old St. Petersburg Stock Exchange Building. Now, if that doesn't make you fall in love with the city, then I don't know what could.

Another wonderful place to include in your long walk, this bridge crosses Malaya Nevka and connects the Aptekarsky and Kamenny Islands. Fun fact: it was actually first designed by our friend Agustín de Betancourt and used to go by his name back in the 19th century before it was completely rebuilt and thus renamed. Here, you can enjoy some relative calm while transitioning from the Lopukhinskiy Garden to the parks of the Kamenny Island which always seem to have a mood of their own. Since fairly recently, you can also peep the shining Lakhta Center towering above the water – a stark contrast to the trees surrounding you (as well as nearly everything in the city).

Finally, let's discover another way off Petrogradsky Island – now to the Finland Station and the somewhat more industrial area of the city. For most of the 20th century, it was known as the Freedom Bridge, but in 1991 it was given its original name back. From here, you can spot the famous Cruiser Aurora right next to the Nakhimov Naval School. It is also peculiar how the bridge connects two seemingly different cities – the shining glass business centers on one side and the cosy historical buildings, all in warm muted colors, on the other. Don't miss this chance to look at the Neva River from yet another angle and say hi to its powerful waters.

If you want to spice up your walks around the city, don’t forget to check out our many articles on the topic before planning your next adventure.