It’s time to make our plans for the weekend that’s promising to be sunny and even relatively warm – it’s mid-April in St. Petersburg after all! So here is our usual list of suggestions – three exhibitions for every taste plus some cinema recommendations to spice up the weekend. Enjoy! 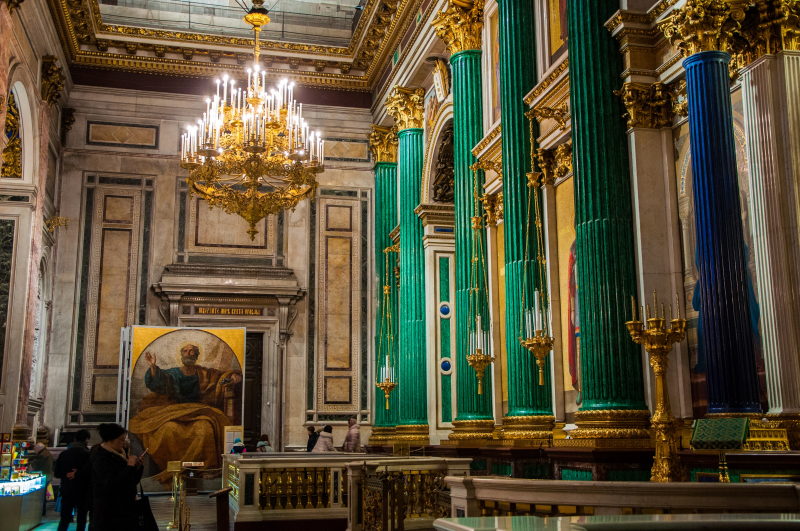 90th anniversary of the museum at St. Isaac’s Cathedral: exhibition

In 1931, during the Soviet times, St. Isaac’s Cathedral opened its doors to the public as an anti-religious museum with its first ever exhibition demonstrating the conflict between religion and science. There, apart from decorations and relics from other churches, the visitors could see Foucault's pendulum that demonstrated the Earth’s rotation. Now, 90 years later, the cathedral still functions as a museum, now presenting the various documents and objects related to its own history. At the special 90th anniversary exhibition, you will see the pieces presented at that first exhibition, as well as photographs and important documents from that period. While you are there, consider climbing several hundred steps to the cathedral’s colonnade – the view is simply breathtaking and is definitely worth this workout!

At this exhibition, you will see the works of Alexey Titarenko, one of the prominent photographers of St. Petersburg. Some of the exhibits belong to a series he created in the 1990s using his original printing technique for long-exposure images of the city to capture the uncertainty hanging above everyone at that time. Somehow, these images also managed to capture the mystical atmosphere of the city he knew as a child. Later, the artist explored other cities, such as Venice and New York, preserving his impression of them on film. This exhibition is a unique chance to travel through time and space and look at the world through an unusual lens.

Nikolay Gumilyov is a well-known Russian poet of the early 20th century, the so-called Silver Age of poetry. Many of his poems are set in Africa, the continent that he got to explore in the 1900s – the travels that were not only captured in words but also in the many snapshots of scenes that impressed the poet. Many years later, St. Petersburg photographer Tatiana Fedorova followed Gumilyov’s footsteps organizing her own expedition to recreate his pictures. Now, to celebrate the 135th anniversary of  the poet’s birth, both the original pictures and their recreations are exhibited for free in the courtyard of Anna Akhmatova Museum. What better way to spend a warm spring day than by taking your own trip to an unexplored country – and learning a little about Russian poetry on your way.

This is an exciting week for all fans of one legendary saga of hobbits and a ring… Yes, you’ve guessed it, the original film trilogy is coming to the screens again – and we are all here for it! This Sunday, at 5:25 pm, you will get the chance to see The Lord of the Rings: The Fellowship of the Ring in the classy surroundings of Rodina Cinema. You can find tickets here – and hurry, ‘cause they are almost sold out!

Also at Rodina Cinema, you can see a Hollywood classic, Moulin Rouge, with Nicole Kidman and Ewan McGregor, with a story of a love triangle that rules them all (Sat, 7 pm, tickets here).

Finally, Angleterre Cinema Lounge is screening the musical Follies, brought to you by none other than TheatreHD, which is another wonderful chance to get the feeling of a world-class theater performance unfolding right in front of you without the need to cross any borders other than your threshold (Sun, 3 pm, tickets here).