Right in the center of Nevsky Prospect, there is a stately Art Nouveau building that stands out from its more classical surroundings – the mysterious Eliseevsky Emporium, an icon of opulence and exotic fare, as well as a symbol of entrepreneurial success achieved through wit and ingenuity. Let’s delve into history and try to unravel the secret to its continuing popularity. 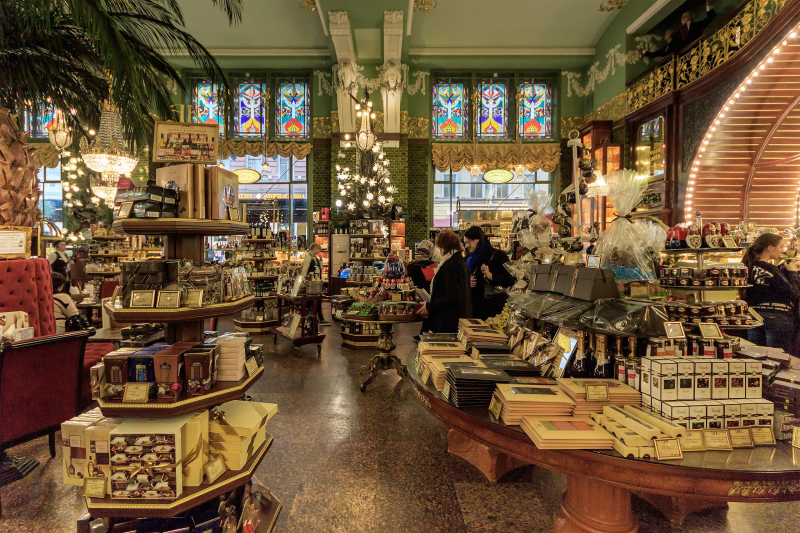 Legend has it that Piotr, the founder of the Eliseevsky merchant dynasty, that once used to be known all over the country, started out as a bonded peasant. One day in the middle of winter in the 1810s he surprised his master, Count Sheremetev by serving delicious fresh strawberries he managed to grow in his greenhouse – something unheard of under piles of snow. Sheremetev was so impressed that he freed Piotr and even offered him some money to start up his business. It turned out that Piotr was a talented businessman who knew that the way to success was through premium quality and exceeding expectations. Thanks to that, his business bloomed which made his shop highly popular among the city’s noblemen.

More respectable sources say that actually Piotr never was a peasant and came from a small town in Yaroslavl Oblast, which was then known for its traders, who were excellently connected and had some financial perks that made it easier to run a business in St. Petersburg. He moved to the city with his wife and three sons who later on continued his business. Whatever his background was, however, Piotr Eliseev quickly became a prominent entrepreneur selling foreign and “colonial” goods of the highest quality.

Visitors to Eliseev’s store could expect to find wines from Italy and France, Swiss cheese, pears from southern regions of Russia, as well as goods from England and the Netherlands. Later on, the Eliseevs started stocking grapes in European winemaking provinces to produce their own wine in the cellars on Vasilievsky Island at Birzhevaya Liniya 16 (now an ITMO University building!).

By the late 19th century, the Eliseevs seemed to have it all – apart from continuing to import and produce the best quality goods for the shops in St. Petersburg, Moscow, and Kyiv, they had invested in their own fleet and opened several commercial banks. But the society around them was changing: the bourgeois class was growing and it was necessary to accommodate their demands, which was impossible to do through stores targeted at a narrow audience. Just then Grigory Eliseev, the head of the business at the time, bought the property at the corner of Nevsky Prospect and Malaya Sadovaya St.

After several years of construction, one of St. Pete’s first Art Nouveau buildings was presented to the public. Immediately receiving mixed reviews, it was considered hideous by some contemporaries, who thought it another case of money destroying the landscape of Nevsky Prospect. But even those critics couldn’t contain their curiosity – there was too much to see inside. The new Eliseev store was not just a shop serving delicacies, it was much more: the first floor featured a cafe where you could try freshly baked goods and imported coffee; adjacent to the store was a variety theater, and on the floor above – a premium quality restaurant. Basically, it was most probably St. Petersburg’s first modern trade and entertainment center. Moreover, the building housed storage facilities, a bank, and a business school started by the dynasty. Not to mention the unique interior design, which cleverly used mirrors and lighting to enlarge the space and turn the presented goods into magical tokens.

Wouldn’t it be great to get just a glimpse of this glory streaming right from the early 20th century? To feel just like those first visitors did when they entered the store in 1908? Guess what – most of these details are still there to see!

The shop these days

Let’s look at the store from Nevsky Prospect first and admire the beautiful moving display created by Mihail Chemiakin, a famous Russian stage designer, for New Year’s celebrations in 2012. The characters seem to have come from a fairy tale to greet everyone entering the magical historical shop.

Behind the heavy entrance doors, our eyes are immediately drawn to the grand piano in the middle of the store – the keys are pressed by themselves, adding to the surreal atmosphere created by the dim lights spread from the crystal chandeliers and glimpses of color coming in through great stained glass windows. Right in the center is a giant palm tree with several small tables at its trunk: there, you can feel like a member of nobility as you taste fresh baked goods offered at the counter nearby.

Speaking of the counters, here’s a warning – it’s better not to enter the shop hungry or you are likely to buy everything on offer. Delicious cheeses, fruit-shaped marzipan, biscuits, sweets, and waffles of all kinds in decorated packages are always on display. The goods on offer transport you to a world with a Ratatouille-like admiration for food.

Just to give you something more to look at, try spotting two figures of the Eliseev brothers (supposedly sons of Piotr) standing on the balcony above the mirror and welcoming you into their incredible world. The exquisite restaurant is also still functioning on the third floor if you want to feel fancy, while the Akimov Comedy Theater next door has a wide selection of plays for every taste (pardon the pun).

Thus, against all odds, the legend of the Eliseevs’ premium quality store still exists right in the center of the city ready to let you in on its secrets with every bite of colorful marzipan. Enjoy!

And if you are planning to explore St. Petersburg this spring, check out this general guide with links to our articles on every nook and cranny of the city and pay special attention to our Unexplored St. Petersburg series.