At the turn of the 20th century, the Art Nouveau style emerged in Europe, characterized by delicate, elaborate ornamentation, balanced asymmetry, and extensive use of floral motifs and sinuous curving lines. In St. Petersburg, this architectural nouvelle vague was aided by the National Romantic movement that flourished in other Scandinavian countries, giving rise to quirky yet stunning buildings that went on to become the city’s best-known landmarks. 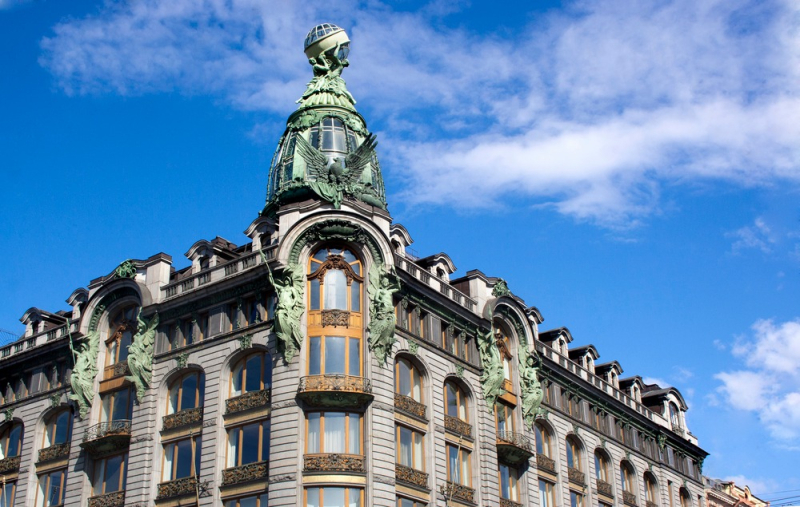 From the 1880s until the eve of World War I, a new architectural movement swept through Europe that was as unique as it was short-lived. Emerged in response to industrialization and tracing back to the British Arts and Crafts Movement and the Pre-Raphaelite Brotherhood, Art Nouveau (meaning ‘new art’ in French) rebelled against the sway of machine-made, mass-produced goods – shoddy and often tasteless – and emphasized craftsmanship, creative expression, and the use of natural motifs and high-quality materials.

One of the by-products of the industrial revolution and the rise of international trade was the emergence of a new wealthy middle class, the so-called Nouveau Riche or bourgeoisie (remember the ‘Unsinkable Mrs. Brown’ from Titanic?). Opposed to the old nobility with their rigid Victorian social principles and perception of art, this new class was ready to embrace change and cherished individuality and freedom. It was they who commissioned the greatest building projects at the Fin de Siècle, propelling the development of Art Nouveau architecture all across the continent.

Though the new style went by different names in different European countries (Jugendstil in Germany, Sezessionstil in Austria, Glasgow style in Scotland, Stile Liberty in Italy, etc.) there were features characteristic of all Art Nouveau designs: curving ‘whiplash’ lines, balanced asymmetry, subtle colors, and extensive use of arches, stained glass, mosaics and floral motifs inherent to Japanese art, which poured into the Western world after the resumption of trade with Japan in 1854 and greatly influenced the way artists viewed and interpreted life forms. This was when Europeans first saw some exotic plants, such as the vibrant tiger lily, delicate bleeding heart, and exquisite orchid, which became part and parcel of Art Nouveau ornamentation.

Bearing a lot in common with other European architectural forms, the Art Nouveau movement in St. Petersburg has its own distinctive features, shaped mostly by the National Romantic style, which spread across Finland and the Scandinavian countries during the late 19th and early 20th centuries, with its fortress-like shapes, stone towers, and rough-hewn granite and soapstone façades decorated with floral and folklore motifs. Among the most prominent artists of the National Romantic style in the Northern Capital was Russian-Swedish architect Fyodor Lidval, whose architectural masterpieces include the famous Lidval House on Kamennoostrovsky Prospekt, Hotel Astoria on Saint Isaac’s Square, and the legendary Tolstoy House, known for its extremely atmospheric courtyards.

A fascination with everything unusual and even nightmarish manifested itself in the abundance of mythical characters and beasts adorning the façades, such as Medusas, griffons, big-eyed owls, dragons, mermaids, dwarfs and chimeras. The two of the most elaborate examples of this technique are the Singer Company House and the Eliseyev Emporium, both located on St. Petersburg’s main artery, Nevsky Prospekt. Apart from extensive decoration, what really makes these two buildings stand out is their large arched windows, which became possible thanks to the use of metal structures brought by the industrial revolution.

Designed by architect Pavel Suzor, the Singer Building was initially supposed to be a skyscraper, similar to the company’s headquarters in New York (at least that’s what the legend says), but as the St. Petersburg building code did not allow structures taller than the Winter Palace, the architect found an elegant solution: a six-story Art Nouveau building, crowned with a glass tower, which in turn is topped by a glass globe sculpture created by Estonian artist Amandus Adamson.

However, one of my favorite examples of St. Petersburg’s Art Nouveau architecture is located a little bit off the beaten track. The oldest railway station in Russia, the Vitebsky railway station was designed by architects Brzozowski and Minash at the beginning of the 20th century. Boasting an elegant sweeping staircase, a foyer with stained glass and spacious halls with a series of painted panels that chronicle the history of Russia’s first railway, the station is adored by many (myself included) as one of the most beautiful places in St. Petersburg. Walk its gorgeous high-ceilinged halls, take a seat on an ornate bench, and feel the vibe of the old times.

Though extremely popular all across Europe and overseas, Art Nouveau did not survive World War I, which in Russia was followed by the Russian Revolution and Civil War. The Russian Empire collapsed to be replaced by the Soviet Union with its own social order and new architectural forms.