From Above: Observation Decks of St. Petersburg

Although St. Petersburg can't boast a hill-abundant landscape, don’t lose hope to enjoy a bird’s eye view of the city! Let’s climb a few (or a few hundred) steps together to discover the most stunning sceneries from and of the city’s centerpieces. 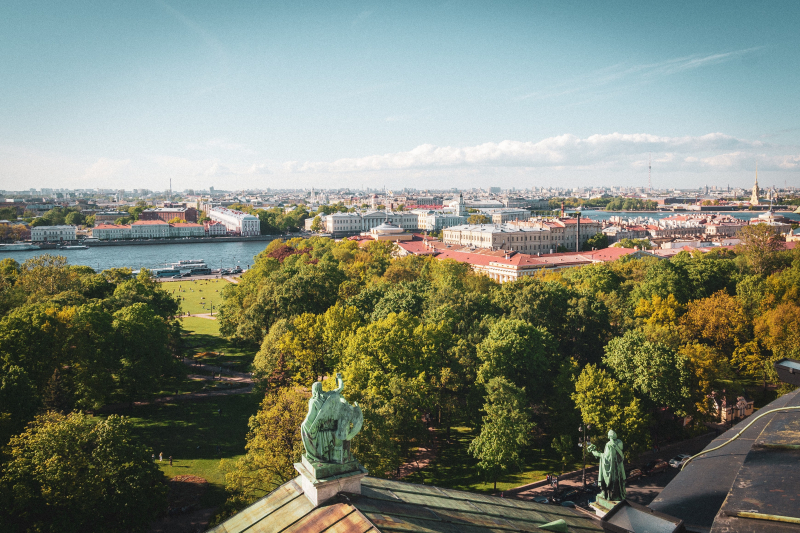 Credit: Dimitry B (@dimitry_b) on Unsplash

The city’s most popular observation deck is – what do you know! – located in the city’s most popular cathedral. The spiraling stairs bring you 43 meters high to amaze you with a panoramic view of the heart of St. Petersburg. Find anything to your liking: Vasilyevsky Island and Neva to the north, the blue dome of Trinity Cathedral to the south, the quiet Kolomna and dockyard cranes to the west, and the Church of the Savior on Spilled on the east.  Fair enough, the location is considered touristy, but I’d say it’s suitable for experienced explorers, too – it’s way cooler to look at the tiny streets, spires, and channels knowing what they really are and how they are connected! This observation deck has only one drawback – you can’t see St. Isaac’s Cathedral itself.

A spacious observation deck in a modern setting can be found on the last floor of the Etagi Loft Project. From here, you’ll see the busy Ligovsky Prospect and its neighborhood: the mysterious Obvodny Canal and the domes of Vladimirsky and St. Isaac’s cathedrals (finally!). The ticket to the roof can be used multiple times during the day it’s been bought – it’s a great chance to catch some sun during the day and go back later for the scarlet sunset. You can also bring your food and drinks and organize a small picnic with breathtaking scenery.

When exploring the Peter and Paul Fortress, the original citadel of St. Petersburg, don’t miss an opportunity to get higher by climbing its bell tower. Once a strategic observation point, these days it’s a unique venue to feast on the panorama of the Palace and Admiralty embankments, the Petrogradsky District, and Vasilyevsky Island. On the way to the top, the tiers of the bell tower are decorated with historical pictures of the city, drawings of the tower’s spire, and a model of the reconstructed cathedral as of 1773.

In September of 2021 the Dumskaya Tower opened its doors to visitors as an observation point for the first time. Located at the intersection of Nevsky Prospect and Dumskaya Street, it offers the most detailed picture of central St. Pete from above. Right, whether you're a resident or a tourist, you probably spend more than enough time navigating Nevsky, but how often are you offered a peek at what’s beyond the walls of Gostiny Dvor?

The 277 steps of Smolny Cathedral will raise you 50 meters above the ground. The city’s highest official observation deck offers spellbinding views of the meanders of the Neva river, the Smolny Monastery and its premises, and the majestic Bolsheokhtinsky Bridge. Due to its rather remote location, the deck is less packed than the above-mentioned options, so rest assured, your pictures won’t be spoiled by strangers' backs.

For those who made it to the end and don’t feel like spending money, here’s a small bonus: a free observation deck is hidden on the last floor of Berthold Center. Enjoy the views!