Guarded by an angel and a three-headed dragon, it hides a spirited courtyard that will make your dearest wishes come true. It’s not a fairytale, it’s a true story about Vasilyevsky Island! 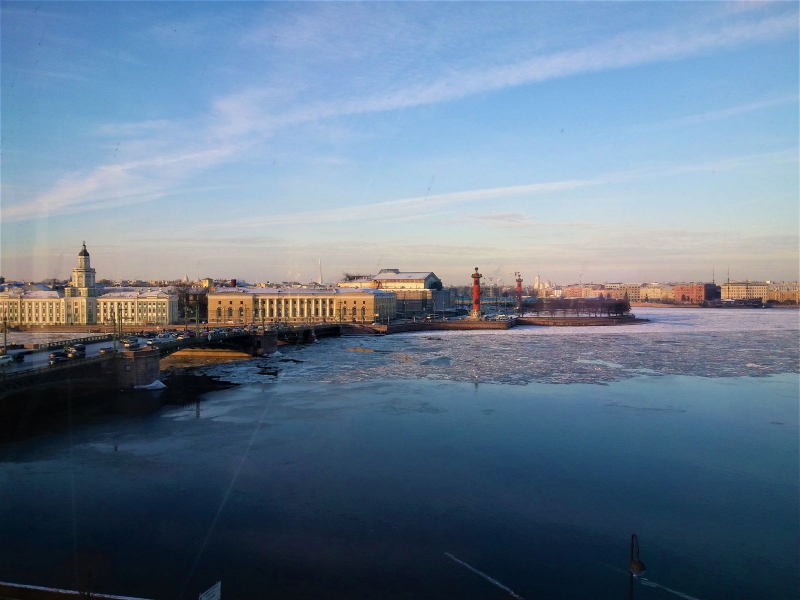 “To Vasilyevsky Island I will come to die,” once wrote the Russian poet Joseph Brodsky. Even if you prefer locations with more optimistic reviews, don’t cross the island off your must-visit list: take my word for it, it's great for living, too. Right after taking pictures at the Palace Square, many city visitors rush here across the Palace Bridge to take a walk by the Old St. Petersburg Stock Exchange and Rostral Columns, admire the majestic three-centuries-old Twelve Collegia, or see curiosities at the Kunstkamera. Besides, Vas’ka, as the locals call it, is full of various hidden gems and lesser-known landmarks worth exploring.

The key feature distinguishing the island from other districts is its layout, formed by 33 liniyas (“lines”) that are placed mostly parallel to each other and crossed by three prospekts (avenues): Bolshoy (“large”), Sredny (“middle”), and Malyy (“small”). 29 of the 33 liniyas are named after numbers, with each liniya taking up only one side of the street. According to the 1716 general city plan by the revered architect Domenico Trezini, they were supposed to be canals, like those in Venice or Amsterdam, but the idea was soon abandoned due to сonstant floods. So, you won't get to see any picturesque gondolas, but at least you won’t get lost that easily.

Disclaimer: here’s a handy map with a short but tried-and-tested route that will be followed below. It also includes a few additional spots you can visit on the way.

Starting off at the Sportivnaya metro station, you leave behind the Tuchkov Bridge, which connects the island to the Petrogradsky District. Walking down the street, the first thing you see is the imposing dome and the bell tower of St. Catherine’s Cathedral. An elegant piece of classicist architecture, on cloudy days it almost merges with the gray sky of St. Petersburg. Have a look at the statue topping the dome – legends say it’s one of the three angels protecting the city from disasters. The other two crown the spire of the Peter and Paul Cathedral and the Alexander Column.

At the intersection of the 1st/Kadetskaya Liniyas and Sredniy Prospect, set eyes on another centerpiece of the island and a gem of gothic architecture: the Lutheran Church of Saint Michael. On weekends, it welcomes visitors to organ concerts. Not reaching the church itself, turn to Repina Street to find yourself in the serenity of a small European town. The narrowest named street of the city (only 5,6 meters wide), it’s paved with cobblestones and built up with cozy houses all the way till its end at the Rumyantsev Garden. A stroll here is always like traveling back in time!

Having enjoyed the garden, сross the street to the University Embankment and the two sphinxes that are a dozen times older than the city itself. Brought to St. Petersburg in 1832, these stone beasts once guarded the mortuary temple of Amenhotep III almost 3,500 years ago! Local legend says that the sphinxes’ facial expressions change throughout the day: calm in the morning, they become malicious towards the night.

Just nearby, the back of the St. Petersburg Academy of Arts hides another amazing garden. There’s a spare column for the Kazan Cathedral, numerous monuments… and horses and ponies! The academy maintains a little stable in the garden as part of its workshop. Built in the late 19th century for painting battle scenes, it's still in use today. Almost daily, my way home from work is through this place, and seeing or even saying hi to a carefree horse cheers me up no worse than a bun from my favorite bakery.

Speaking of buns and all other foods – if you feel hungry, visit the famous Vasileostrovsky Market a block down. Among those modern conceptual eateries and an authentic grocery market, you are welcome to try cuisine from all over the world in a picture-worthy setting. Hard to imagine, but a few years ago it was just a typical Russian market where you could buy anything from cabbage to counterfeit jeans.

Just around the corner, there’s another of Vasilyevsky Island’s mysterious locations. Here, in the Courtyard of Spirits, you can make any wish. In fact, it’s just a tiny two-meter-long courtyard, or rather a light well, and getting there always turns into an adventure: only having found it by yourself can you be sure that the wish will soon come true.

A few blocks down to the Bolshoy Prospect, not far from cake-like St. Andrew’s Cathedral, another courtyard is ready to surprise visitors with a giant three-headed dragon made of concrete. This piece of art came to life between the '80s and the '90s thanks to an unknown local resident. Still, the green creature is the brightest feature of the island and a beloved kids' attraction.

Leaving the courtyard, do not miss the public space сalled Lines. It features cafes, shops, and a branch of the Mayakovsky Library and offers a wide choice of cultural events. Once, I was lucky to witness an exhibition dedicated to sausage rolls (or “sausage in dough” as they’re called here) – it was the most insightful experience.

What else to see?

Hope you found this route useful! Of course, Vasilyevsky Island is much more than its historical part, so if you’re interested in further exploration, check out Icebreaker Krassin, Erarta Museum, Sevkabel Port, and the surrounding areas.

Want to explore more of St. Petersburg like a local? Take advantage of our guides to Moskovsky Prospect and Petrogradsky District.