The end of the 18th century saw the decline of Baroque architecture and the rise of a new style, Classicism. The brightly colored, wedding-cake buildings of the olden style were replaced by sophisticated designs inspired by the elegance and poise of the Classical Antiquity. St. Petersburg, too, was engulfed in this Europe-wide architectural vogue, which resulted in a wealth of architectural masterpieces. 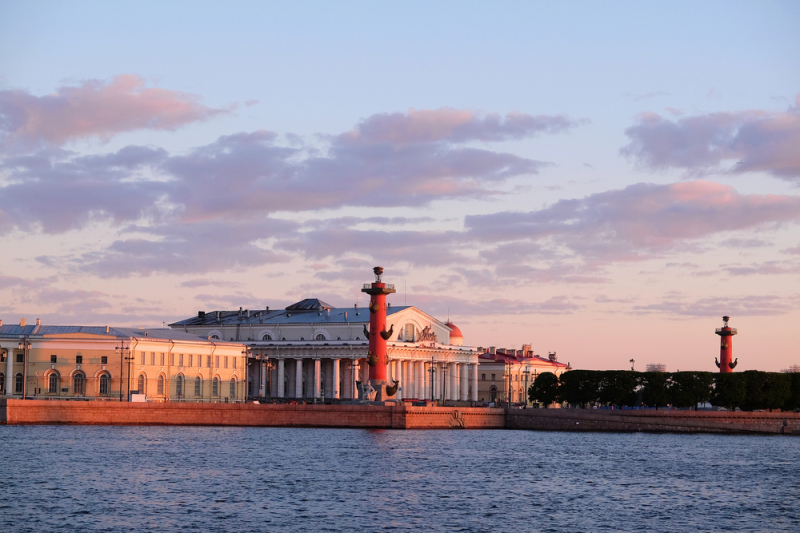 In 1762, along with the demise of Empress Elizabeth, the era of lavish palaces and exuberant cathedrals came to an end. Just seven years after his main masterpiece, the Catherine Palace, was finished, Francesco Bartolomeo Rastrelli was ordered to retire. One of the greatest Baroque architects of St. Petersburg who devoted his whole life to the city died in Italy, poor and almost forgotten. He asked the new administration to at least return his architectural drawings, but his request remained unfulfilled.

The new empress Catherine II wasn’t fond of luxurious ‘whipped-cream’ edifices. A patron of the arts, Catherine the Great presided over the age of the Russian Enlightenment, a period in which the government began to actively encourage the proliferation of arts and sciences, which had a profound impact on Russian culture. Architecture was no exception. Classicism, the new architectural style, was meant to embody the ideal of a harmonious society built on rationalism and belief in progress and celebrate the elegance and glory of the biggest European country.

The Russian Classical architecture was very much influenced by the European one, which, in its turn, drew inspiration from Antiquity with its classical orders, symmetrical plans and façades and the use of other conventional features such as pediments, porticos, pilasters and so on. Among the first adherents of this new style in Russia was the French architect Jean-Baptiste Michel Vallin de la Mothe. His most famous work is the building which is now referred to as the Small Hermitage, commissioned by none other than the Empress herself. Catherine the Great, who resented the grandeur and vastness of the Baroque Winter Palace, called this regular mint-green building facing the Neva River hermitage (from Fr. ermitage – a place of solitude), or her “small secluded hiding place” (small, huh?). It is here where she placed her greatest treasure, her art collection, which would eventually form one of the largest art museums in the world, the State Hermitage Museum.

Vallin de la Mothe’s other works in Northern Venice include the oldest Catholic church in Russia, the Catholic Church of St. Catherine, the Moika Palace, famous for being the place where Grigori Rasputin was murdered in 1916, and the Great Gostiny Dvor, among others. Sprawling at the intersection of Nevsky Prospekt and Sadovaya Street for over a kilometer, Gostiny Dvor is not only the city’s oldest shopping center but also one of the first shopping arcades in the world.

Over more than 30 years of Catherine’s reign, Baroque edifices in St. Petersburg were completely overshadowed by Classical ones. After coming to power in 1801, Alexander I did not only support his grandmother’s architectural vision but even brought it to the next level. The beginning of the 19th century in Russia was marked by patriotic fervor as the country approached the war with Napoleon, and all art forms, including architecture, were called upon to celebrate the Empire’s power and glory. In this period, regular and balanced Classicism evolved into much more ponderous and triumphant Empire style, characterized by the synthesis of Classical order system and monumental sculpture.

Among the most prominent creators of this period was the Russian architect Andrey Voronikhin, who is best known for his work on Kazan Cathedral, modeled after St. Peter’s Basilica in Rome. Walk along Nevsky Prospekt and admire its truly magnificent colonnade, made up of 94 columns. By the way, Voronikhin wanted to make the same colonnade on the other side of the cathedral but fate decreed otherwise.

Jean-François Thomas de Thomon is yet another famous architect of the Alexander era. It was he who designed one of St. Petersburg’s main and most fascinating architectural ensembles, the Spit of Vasilievsky Island. Once, here, in the place where the Neva River splits into two, the main port was located. Inspired by the Greek Temple of Hera, the Old Stock Exchange building features a peristyle of 44 Doric columns resting upon a massive stylobate of red granite. The Spit is simply unimaginable without Rostral Columns, situated on both sides of the Stock Exchange. These massive 32-meter-high Doric columns are coated with a deep terracotta red stucco and decorated with sculptures of naiads, sea creatures, anchors and bronze ship prows (rostra). At the base of each column seat marble figures representing the major rivers of Russia: the Volga, the Dnieper, the Neva, and the Volkhov. Note that the Columns are particularly impressive on major public holidays when torches are lit on top of them.

When talking about St. Petersburg’s classical architecture, it’s impossible not to mention the name of Carlo Rossi, one of the most prolific architects of his time. His numerous works include the Mikhailovsky Palace, which now hosts the Russian Museum, the General Staff building located on Palace Square in front of the Winter Palace, Yelagin Palace, and many other gorgeous edifices. However, my favorite work of his is the Alexandrinsky Theater. I really enjoy walking past this monumental yet elegant building in the evening when it’s lit up and glows gently like no photo will ever convey. It may seem weird but every time I look at this edifice in the dark I think of snow white lace. If you happen to walk there, I very much recommend checking out the other side of the theater and stroll down Rossi Street, the most proportional street in the city. It is perfect any way you look at it: the width equals the height of the buildings on both sides – that would be 22 meters, while the length of the street is 220 meters: ten times the width!

In the middle of the 19th century, the Empire style reached its highest peak, which took its shape in Saint Isaac’s Cathedral, the largest Orthodox basilica in the city and the fourth largest (by the volume under the cupola) cathedral in the world. Designed by the French-born architect Auguste de Montferrand, the edifice took 40 years to construct! Huge, monumental and slightly disproportionate, this cathedral marked the decline of the Classicism style in St. Petersburg and opened doors for the next architectural era, Eclecticism.