Glamor meets unique Nordic charm in this historic area of St. Petersburg, perfect for a day of urban adventuring. 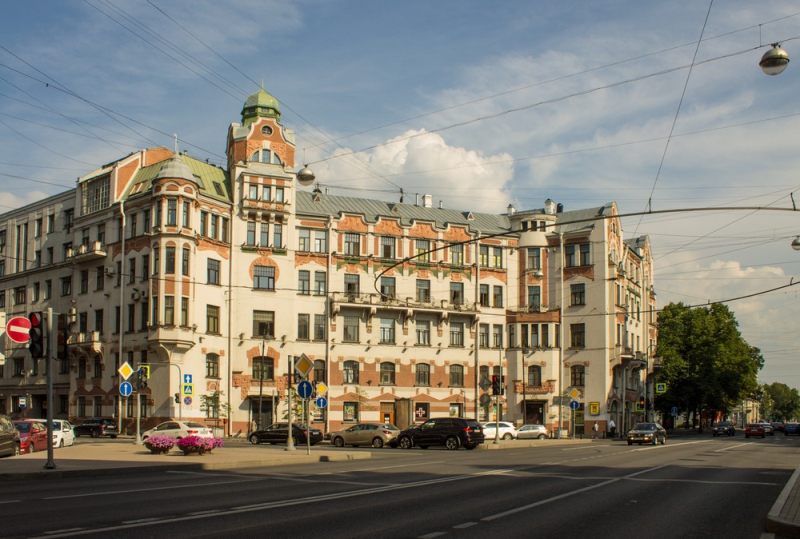 When Peter the Great started the city with a fortress, he also built his own house at the southern end of the nearby Petrogradsky Island, effectively giving start to what was to become one of the most desirable places for dwelling or commerce in St. Petersburg.

In modern times, the Petrogradsky District stretches across Petrogradsky Island, the third largest island in the Neva delta, from Troitsky Bridge in the south to the Malaya Nevka river in the north, and offers a unique blend of notable architecture and winding green alleys that merge into courtyards.

It also happens to be the site of my annual summer pilgrimage. I take the metro to Petrogradskaya station, buy a chocolate-dipped ice cream cone and try to soak in as much quintessential St. Petersburg as I can. Here are my three favorite routes to take.

One of the most beautiful streets in St. Petersburg, and one of the busiest both day and night, Kamennoostrovsky Prospekt is the central thoroughfare of Petrogradsky District, crossing the entire island and linking the centre of the city with its northwestern boroughs.

From Petrogradskaya, I take a few steps south down Kamennoostrovsky Prospekt to see arguably my most favorite building in the city – The House with Two Towers. You can’t miss it – dominating Leo Tolstoy Square, it’s a unique building in neoclassical and neogothic styles, with hexagonal towers reportedly based on the gatehouse of Maxstoke Castle in England. The land plot was acquired by a factory director, Konstantin Rosenstein, in 1910, who also designed the building, and mock gothic decorations and other distinct design elements were added by architect Andrey Belogrud. Inside, the apartments once were the marvel of engineering, featuring gas stoves and heated closets for drying laundry. Over the century of its history, it has been many things but I only know it as the Andrey Mironov Russian Entreprise Theater.

Continue a few blocks south and you can enjoy the shade and the sculptures of musical instruments in the Andrey Petrov Garden, which commemorates a famous composer who lived and worked in St. Petersburg. Curious about the lifestyle of the Soviet elites in the 1930s and life in the pre-war USSR? Step into the Kirov Museum, an actual former apartment of Sergei Kirov, a revolutionary and Soviet politician.

Cross the beautiful Austrian Square and pop into Lenfilm, a renowned movie studio and now a museum and a movie theater that oftentimes screens movies in their original languages. Soviet classic films come alive here through artifacts and posters displayed in the public areas.

Less than a block ahead you’ll see the famous Lidval House, considered a fine example of the Northern Moderne style inspired by the national romantic style of Finland and Sweden (check out our series on architecture).

Turn around, and you’re by spaceship-looking Gorkovskaya metro station, overlooking the most famous mosque and only steps away from ITMO University’s main building on Kronversky Prospekt, 49.

Every penny of my first salaries was once spent at the stores on Bolshoi Prospekt on Petrogradsky Island. A second major thoroughfare of the island, it is just as famous for its upmarket vibe as it is for its unique architecture, reflecting the fashions of the day with some of the best examples of moderne, revivalism and Russian neoclassicism in the city. Particularly noteworthy is the House with Owls on Bolshoi Prospekt 44, which won an award for its Northern Moderne facade in 1912 and is just as beautiful today.

As you make your way from Petrogradskaya metro station towards Petrovsky Stadium, once home to St. Petersburg’s soccer team “Zenit”, take a moment to look into the shady courtyards, lose yourself in the meandering, narrow streets that hug the prospect, admire intricate design elements of the buildings, and soak in the unique St. Petersburg sense of style.

One of the amazing things about Petrogradka, as the locals call it, is that it’s not just about beautiful facades. If you turn right at the House with Two Towers, a block later you’ll find yourself at Karpovka, a small river wide enough just for the reflections of the houses on both of its sides. The area that stretches to the right was once a half-abandoned yacht club but, thanks to the efforts of the local community, last year it underwent a thoughtful makeover and was turned into a shaded promenade complete with sculptures and places to relax.

Across the Karpovka River, you’ll find greenery from around the world at the St. Petersburg Botanical Garden. Founded by Peter the Great in 1714 to grow medicinal plants, it has over 26 green houses representing flora from the deserts to the jungles, and its lush outdoor gardens will inspire you to paint even if you’ve never done it. The Garden survived the Siege of Leningrad during WWII and some of those ‘veteran’ plants were even awarded medals. Curious when its gem, the rare Tsaritsa Nochi cactus, is blooming? Follow their Instagram account.

Feel like more strolling? Check out our Steps Away series that lets you explore the areas around ITMO University’s campuses in the city or travel in time along Moskovsky Prospect.