We at the ITMO.NEWS editorial office love to eat. We have smoothie weeks at the office and share homemade goodies. But more than anything, we love to go out for grub and find new, sumptuous culinary experiences without spending a fortune. Here’re some of our favorite places in St. Petersburg. 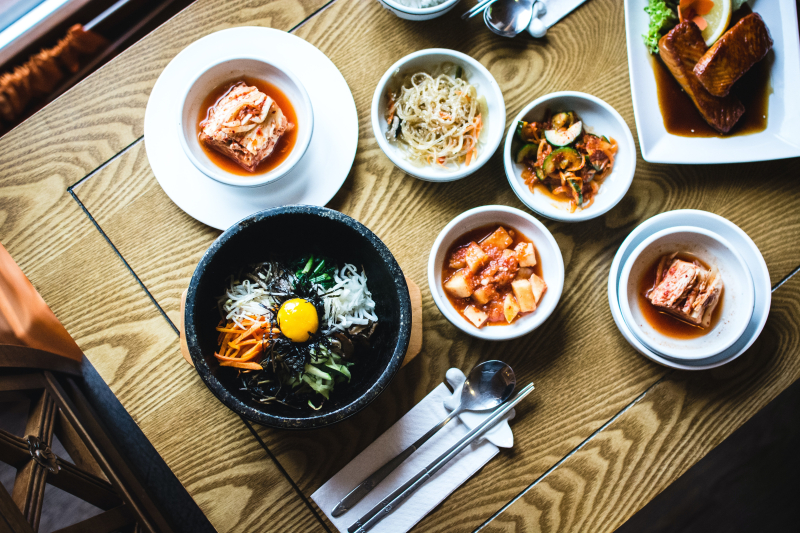 I’m a gourmand, but not a gourmet, and had seriously considered writing about the restaurant at IKEA (I know, it’s just sad). Don’t worry, I wouldn’t stoop so low (although their veggie balls and grilled veggies are indeed quite good). Apart from liking questionable IKEA food that was probably made in some dodgy factory miles away, I also love Korean cuisine, and St. Petersburg doesn’t disappoint in this department.

My favorite such spot in the city is Bab Jib, a restaurant chain that offers an impressive array of authentic Korean dishes and, unlike many other Korean eateries, is very vegetarian- and vegan-friendly. I also like the restaurant Koreana (their crunchy kimchi, fragrant rice, and spicy nibbles are absolutely dreamy), the ramen joint Mashita (really cheap and very hearty portion sizes; just a heads up: the restaurant on 38 Kamennoostrovsky Prospekt is the best one of the chain), the restaurant MakkoLi (their soups are to die for), and the family cafe Omo (good-quality Korean staple dishes with a pleasing price tag). All of these are run by Russian Koreans who know what they’re doing, so you won’t be getting any porky pies (they do serve steamed pork buns, actually, but you get what I mean).

As both a coffee lover and a sweet tooth, I’m always in search of nice new coffee places with delicious desserts. And, surprisingly enough, they are not so easy to find. Most cafes you see on the streets are either chains with no soul, predictable menus, and blank-faced waiters, or dodgy spots with off-tasting coffee and stale croissants. That’s why I was very excited when a friend of mine showed me this tiny cafe called Tchk, hidden in one of St. Petersburg’s numerous courtyards. Tchk is a telegraph-style spelling of tochka in Russian, which means a dot, and for good reason.

The whole place is about six square meters; there’s a little table for two people and a bar counter. But the lack of space is compensated for by a cosy, quiet courtyard with lots of flowers, where you can enjoy the creamiest latte ever while sitting on an old car, nice friendly staff, and a good choice of desserts (among my favorites are chocolate croissants on weekdays and cream cheese tarts and raspberry/blackcurrant puffs (profiteroles) on weekends). The cafe is situated right in the city center not far away from the Peter and Paul Fortress. To find it, walk from Gorkovskaya metro station along Kamennoostrovsky Prospekt to Mira Street, turn left, then turn into the first archway on the left and go straight till you see a red building with an open door.

When you bite into crispy, bubbly dough and delicious meat juices run down your chin - that’s what I call a real cheburek. This deep-fried turnover is worth the calories even if you’ll have to munch on salads the rest of the week. I used to be a non-believer until a friend made them at home and put a shot of vodka in the dough - for crispiness.

The second time was when I stumbled upon a cafe called Brynza. Chebureks are their specialty, but I had no idea that mine would take up an entire plate and send my taste buds into deep-fried heaven. I tried the classic cheburek with homemade brynza cheese and gouda, but the ones with three types of meat, or porcini mushrooms, or even “Chinese” with sweet and sour sauce also looked tempting. Next time I’m going for a dessert version with apples, raisins and cinnamon served with cherry sauce. Brynza is a chain, so you’re likely to find your cheburek fix by any ITMO campus.

A relative newcomer, Ronny brought a much-needed twist into St. Petersburg’s Japanese cuisine scene, which has been, by and large, filled with trite, repetitive attempts to capitalize on the people’s love of sushi, rolls, and all things Nippon. Huddled next to a whole bunch of other cute and trendy places in New Holland, this stylish bistro nevertheless stands out from the crowd. There’s a wide choice of both authentic and experimental Japanese food: from plain regular sushi and nigiri to “Okinawa sandwiches” and Westernized sushirritos, along with a selection of brothy ramen and unusual desserts. Speaking of desserts, try the seaweed/wasabi cheesecake: it’s to die for!

If you still think vegan burgers are bland, lackluster or a sad attempt at “reinventing meat”, then you clearly haven’t been to Hood. Having started as a simple food stand, they have now upgraded to a full-on hole-in-the-wall in one of the city’s biggest nightclub spots on Konyushennaya Square, right in the heart of St. Petersburg and next to the Church of the Savior on Blood. But there’s no blood in these burgers! The menu also includes hot dogs, shawarma and other snacks, all made with zero animal products – and yet just as good as the real thing. Among the highlights are: Sweet Baby, a tofu burger with pineapple and sweet chili, the Fishburger, a seaweed concoction that you won’t believe has no fish in it, and the classic Cheeseburger with a chickpea patty.