St. Petersburg is rightfully known as Russia’s most romantic city. And with a certain love-infused holiday coming up, let’s take a look at the many places you can visit and activities you can partake in on the most sentimental day of the year – or whenever your heart feels like it. 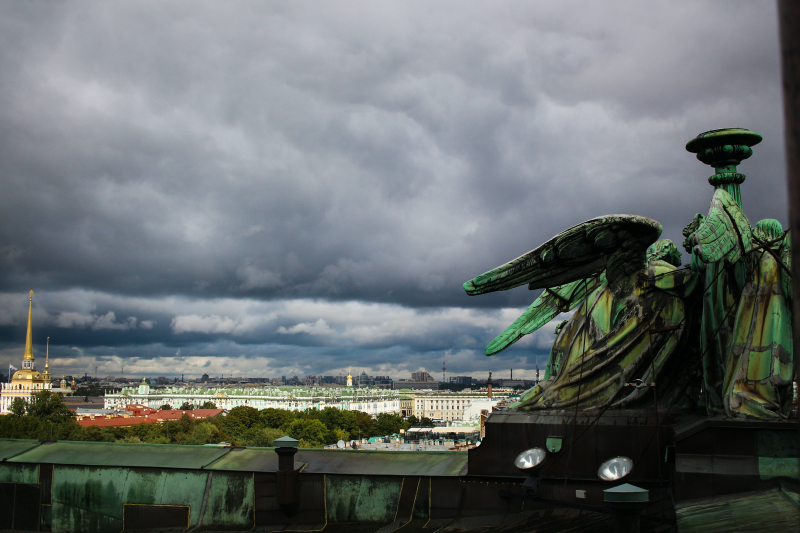 This is a visit that’s easy to sell: one of the world’s greatest cathedrals, a magnificent viewing terrace atop it, and a breathtaking view of every single major landmark in the city. From the height of almost 50 meters, you can see it all: the Admiralty, the Palace Square, the Peter and Paul Fortress, the sprawling Neva River, the iconic roofs of the city, and even the Sea Port of St. Petersburg far off in the distance.

Even though this oft-overlooked quaint park is situated at the intersection of Nevsky Prospekt and Fontanka River, it is surprisingly serene and quiet. Many a St. Petersburg citizen have passed it by, unaware that the wrought-iron fence of Anichkov Palace hides a beautiful little garden planted in 1743 for Empress Elizabeth of Russia. Finding the entrance can be a bit tricky, but think of it as part of its charm: a hidden sanctuary smack-dab in the center of the city!

Here’s an unusual experience: fine dining in pitch-black darkness. The first Dans Le Noir? restaurant opened in Paris in 2004, and the chain soon spread to many European capitals, including St. Petersburg. For about an hour and a half, you will maybe put yourself in the hands of to a visually impaired guide who will take you to your table and show you a very different perspective on eating – and life. The full-course menu, developed by a top chef, is served in four variations: meat, seafood, vegetarian, or “chef’s surprise”. This is certainly a meal to remember – even if you’ll never see it with your own eyes.

Whenever you find yourself in the eastern part of Vasilievsky Island, take a half-hour to walk the length of Repina Street, starting from its intersection with Sredny Prospekt V.O. and all the way towards Rumyantsev Garden. At 5.6 meters-wide, it is the city’s narrowest named street! Still paved with stone instead of asphalt, it feels untouched by the 21st century. And once you arrive at the cozy Rumyantsev Garden, you can choose to head east towards the city center and the Spit of Vasilievsky Island, or west towards the piers, where you can go onboard the Icebreaker Krassin or take a tour of an actual submarine!

If you’d rather lounge than ramble, you might like the Pandora Cinema chain with locations at Obvodny Canal Embankment 80 and Konnaya St. 12. Here, you can rent one of the eight individually-designed screening rooms for just the two of you and choose a movie from the catalog of several streaming services (including films and TV series in English and other languages), or bring your own on a physical storage device. To improve the experience further, you can order from a selection of drinks and food, have flowers or fondue brought to you, or even request a live musical performance!

Another wonderful yet lesser-known walking route will take you along the Kryukov Canal, passing many of the city’s sights and crossing all three of St. Petersburg’s central waterways: the Moika and Fontanka rivers and the Griboedova Canal. Start at the New Holland Island and walk south, past the Naval Museum, the old and new stages of the Mariinsky Theater, the dashing St. Nicholas Naval Cathedral and all the way to the banks of Fontanka. All this makes for a short but absolutely picturesque walk, away from the bustle of the more tourist-heavy parts of the city.

For more ideas, check out our list of perfect date spots in St. Petersburg.