Having lived in St. Petersburg for a long time, we fondly believe we know it inside and out. We’re taking suburban trains and exploring the outskirts to find hidden sights of our beloved city, when in fact, off-the-beaten-track gems of the Northern Capital are much closer than one can expect. Here’s our proof – a 15-minute ride from the city center will take you right into the middle of the unique culture, history, and mentality of Kanonersky Island. 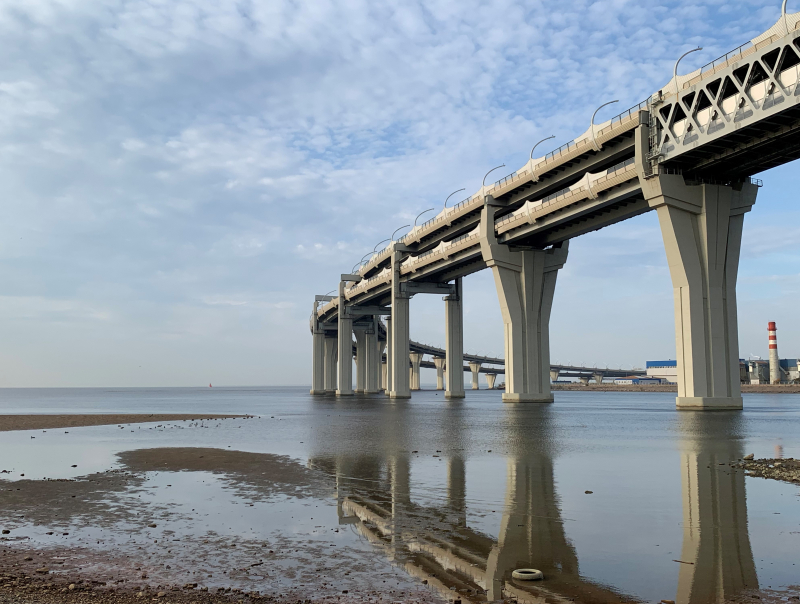 From a bird's eye view, Kanonersky Island resembles a skinny herring, meanwhile its original name, Kissasaari, comes from Finnish and means Cat Island. Locals affectionately call it Canary – referring to the fancy Canary Islands – although the reality is far from a paradise resort. Instead of the Côte d'Azur there's the cold Gulf of Finland, and the first thing that catches your eye (and ear) here is the surreal spider-like Western High-Speed Diameter rustling overhead. You definitely won’t get confused by the names of the streets, as they don't exist here: all buildings have the same address – Kanonersky Island. The island’s isolation and the contrast between old and new are certainly part of the charm here.

In the 1700s, the island hosted an ammunition warehouse and during the Great Northern War it was a training ground. That’s when the island got the name Kanonersky – after the gunners, or canonniers in French, who protected it during the war. Due to the lack of fortifications, the place was constantly flooded, which made it uninhabited. Upon completion of the shipyard building and the nearby Morskoy Canal for sea traffic in the 19th century, the land was protected from flooding, and Kanonersky Island gained a population of many workers and their families.

In Soviet times, Kanonerka continued to serve as the homeland of local shipyard workers. The island was cut off from civilization, and the only way to get to Leningrad was by a water tram, which also supplied the only local grocery shop. This seclusion on a small piece of land formed the islanders' special mentality – people knew each other and never needed to lock their doors. There was nothing to be afraid of as no stranger could enter this land. The life of islanders and their kids of the ‘60s is shown in the movie Rebyata s Kanonerskogo (The Boys From Kanonersky). Don’t let yourself be fooled, though, as it’s a little bit romanticized like any movie of that era dedicated to the working-class man.

The era of isolation finally came to an end in 1983 with the construction of the tunnel that connected the island to Leningrad. It was for sure time of changes, which were not completely welcomed by the locals – in addition to the freedom of movement it also brought ‘tourists’ who littered the island’s beach and the promenade. In the gloomy ‘90s, it became a popular rendezvous spot for the local crime bosses (not a very charming fact, but no less true).

Currently, Kanonersky Island is quite a calm though a little desolate place, due to the construction of the elevated highway. Some of the already few island’s houses, located under this road, became abandoned against the wishes of their tenants. The total population decreased to about 4,000 people.

But don’t let these complicated historical references scare you. Spending a warm sunny day here, which I luckily managed to do, can easily be a great experience. As it turned out, the place is still popular among tourists, who come here to enjoy the unusual beauty of the outskirts with a view on the city center. How do I know they all were tourists? I was asked for directions twice (probably, my colorful jacket made them think I was a local stuck in the ‘90s).

From the first steps on the island, you are instantly influenced by the serenity of a small settlement, glowing in golden fall colors. Buildings here make up a whole palette of architectural styles – from the Stalinist Empire to Constructivist references of the late ‘80s. Empty houses with boarded-up windows don't seem frightening or haunted anymore, but remind me of peacefully sleeping idols. One of the two old-fashioned grocery stores we found was the same we had next door when I was a kid, and it was hard to resist the nostalgia.

Walking down the canal embankment, we were now and then overtaken by colored cargo ships, smoothly making their ways into the seaport. The road noise merged with the sounds of island life and seagulls cries. In contrast to the highway's busy life above, you hardly see a car on the island.

The most remarkable place on the island is definitely the bay shore. Of course, it can’t compete with the well-groomed embankments of St. Petersburg, but it offers a unique view from a completely different angle. You can still see Lakhta Center and happy yachts’ owners sailing the sea, however, the nearby highway with its legs soaked in the water's mirror-like surface gives it a completely surreal look.

Without any doubts, Kanonerskiy Island is an authentic place, blending nature with an industrial vibe. According to the island’s largest VK community, its motto is “A place to go back to”. You can agree or disagree, but it's certainly worth checking out.