How to Get in Trouble at a Russian Dinner Table

Like holding your fork in your fist? Using a napkin to blow your nose? Sitting cross-legged on your chair? Your Russian grandma – should you be lucky enough to have one – will set your Russian table manners straight, and then stuff you full. 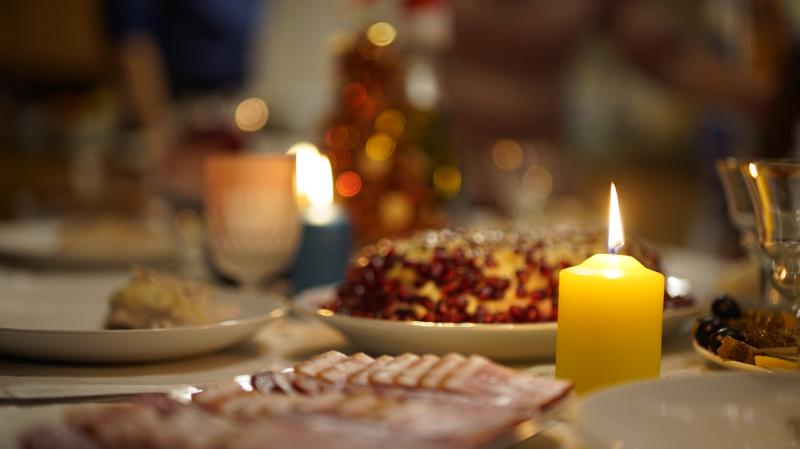 Pretend this is about food. You think you’re all here to get some grub? Wrong! You think your refueling speed and efficiency count? Wrong again! Yes, there’s food at a Russian table, and probably lots of it, but it’s never about just that alone. If it’s dinner, people are here to talk and spend time together, which might be a while. They won’t load up on everything they plan to eat right off the bat – they will take small helpings of what’s offered on the serving dishes. They might also try to poukhazhivat, or serve you, meaning that someone sitting close to you might offer you a helping, or just put it right on your plate. They’re not trying to test your boundaries. They’re just trying to be hospitable and welcoming. Pro tip: leave some food on your plate if you’re not ready for seconds.

Start eating before everyone else. Russian is a collective society, so people like to do things together. Even if the sizzling shashlik is screaming “Eat me!” you’re expected to wait for everyone to sit down at the table and get a go-ahead from the host: “Priyatnogo appetita!” Secret nibbling or winning the race for the juiciest slice is not allowed.

Fumble with a fork and a knife. Russians expect even little kids to be pros at eating with a fork in the left hand and a knife in the right hand. It’s somewhat counter-intuitive if you’re a righty, but they argue that it’s easier to control the knife with the hand you can use best. Or they just like torture. Moreover, you’re expected to keep this up throughout the meal, as opposed to using this method to cut everything up and then use your usual fork-in-the-right-hand routine to eat. Torture again. Pro tip: practice on a hotdog.

Leave empty bottles on the table. Empty alcohol bottles end up on the floor the second the last drop is drained. Some say it has to do with evil spirits waiting to take up residence in them, some – that they’re inviting less prosperous times. Then there’s the legend of the Cossacks. In the 19th century, after driving Napoleon back to France, they were celebrating in Parisian restaurants and were charged by the empty bottle. So, reportedly, they hid them under the table. Nowadays, that probably won’t take it off your tab, and instead, serves as a sign for a new bottle.

Get up before everyone else. When you’re done you can’t just get up and go watch TV – you have to wait for everyone else to be done. Or you have to come with a plausible explanation for why you’re leaving, like you have a train to catch or the world to save. Your offers to help clean up will be refused but appreciated nevertheless. Don’t forget to offer your sincere admiration: spasibo, ochen vkusno – as in “thank you, it was delicious!”

Here’s more on how to feel native in St. Petersburg and how to speak about food like you’re writing a great Russian novel and of course, party like a Russian.