On every festive table today in Russia you’ll find Olivier salad. But what’s the secret ingredient? Ikea has the answer. 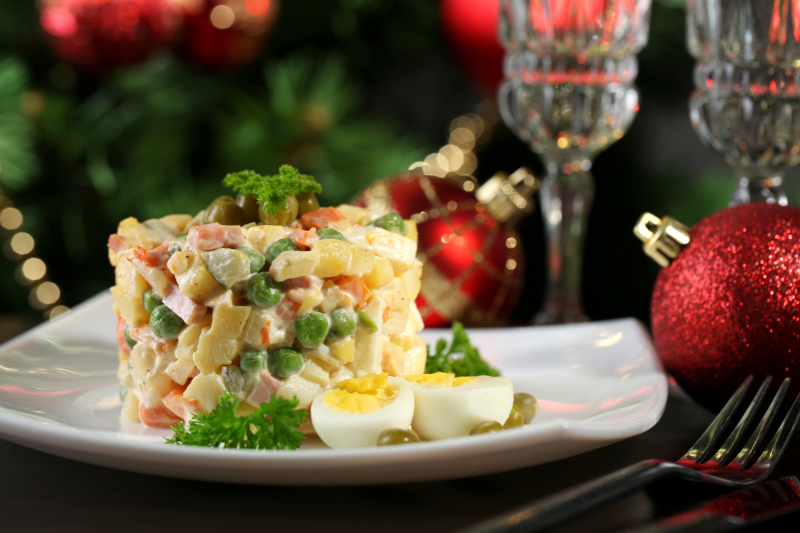 A few days ago, the famous furniture company posted detailed instructions of how to assemble the holiest of holiday recipes - Olivie salad, a long-time staple of New Year’s celebrations in Russia. In its usual no-nonsense, pictogram fashion, it spells out the basic recipe - potatoes, carrots, pickles, eggs, sausage, all diced to match the size of canned peas and smothered with mayonnaise. It has to be prepared while watching “The Irony of Destiny” the holiest of holiday movies. The peas from the can have to be guarded against encroaching relatives with “Don’t touch! It’s for New Year!” And the final product has to be awarded the centerplace on the table.

Come to think of it, the salad is nothing special. It’s not exactly lobsters in Champagne dip. In essence, a local take on potato salad, it has the most basic ingredients that could be found in Russian and Soviet kitchens in even in the direst of times. Legend has it that it was created in 19th century Moscow by a French chef Monsignor Olivier, hence the name. During the Soviet times, the meat ingredient in it was the cheapest, pink-and-pulp kind of sausage. Many still stick to the “original” recipe, even if they can afford better ingredients, but some go for an upgraded flavor, replacing it with roasted chicken, beef or even cow tongue.

One of the many virtues of Olivier is you normally make a pot of it, and it’s perfect for stealing spoonfuls straight from the fridge as the holidays go on. The upside is that it gets better as the ingredients marry together, but the downside is that well, it disappears even faster.

Of course, Olivier is never about the calorie intake. It’s about asking your sister about her new boyfriend while dicing the veggies, letting dad sneak a bite and making a wish as the clock strikes midnight. No wonder in the Ikea’s recipe the secret ingredient is … love.

If only 2019 came with such easy-to-follow instructions. Happy New Year!