This week, all the talk is about the Russian pancakes called blinis. Feel like hosting your own blini party? 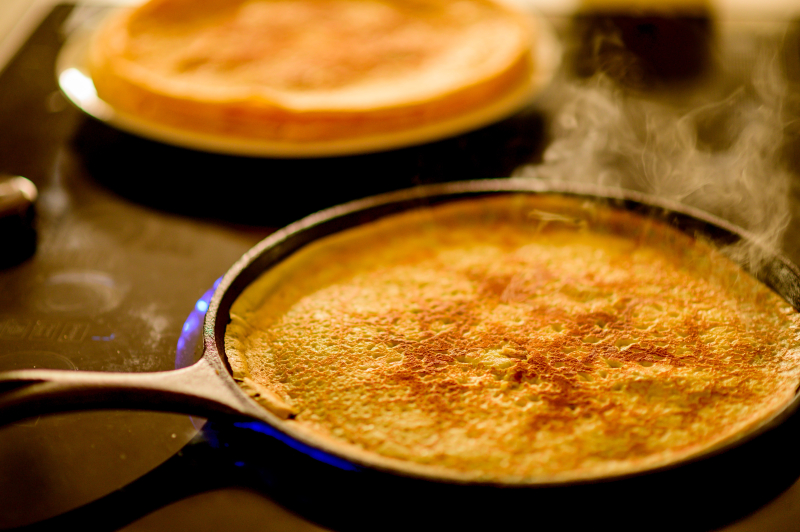 Back when I was young and ambitions, I decided to make blini - crepe-like pancakes - for the spring holiday of Maslenitza. It just seemed like having an advanced degree would be sufficient for cooking up a bunch of dough and smothering it with butter. My grandma did this every Sunday. How wrong I was.

First of all, there seems to be an infinite number of recipes for what should be considered “classic” Russian blinis. Some people make them with yeast, some with baking soda, some with no leavening at all. Some let the dough sit overnight and some use it right away. Moreover, blinis can be as big as a frying pan or no larger than a fist, in which case they’re called blinchiki.

Then there’s the whole other issue of fillings, which can range from smoked salmon and dill to ham and cheese, mushrooms and sour cream, strawberry jam, and my absolute favorite, sweetened condensed milk.

If you’re really showing off, you can have them with caviar, but that’s just, yes, showing off.

On that fateful holiday, I decided to follow the simplest of recipes where you mix an egg, milk, flour, a tablespoon of sugar and a dash of oil. I skipped the part where you were supposed to sift the flour – because who has the time to do that? – but didn’t skip the part where you’re supposed to spit on the skillet to see if it’s hot enough. That part was just too much fun to miss.

The skillet hissed, and I covered it with half a ladle of runny dough. Instead of a beautiful, lacy pancake that would make my grandmother proud, two minutes later I had a frisbee-like discus that was only good for tossing out of the window. Just like the Russian saying goes: “Первый блин комом,” as in – the first attempt always goes wrong.

Just in case you, too, feel like trying your hand at blinis around Maslenitsa, here’s what to keep in mind:

The easiest way to turn all this into a party is to make a stack of plain blinis and offer an array of fillings so people can choose whatever you want.

If all fails, or even as a perfectly sane and appropriate plan A scenario, there’re excellent blinis at Teremok.