May the Fourth be with you! As we gear up to see the final installment of the Skywalker saga (who else’s dead inside thinking about it?) in cinemas this December, some choose to rewatch all of its eight predecessors to tie them over. And what this means is yet again falling in love with the timeless magic of The Empire Strikes Back, cringing over Attack of the Clones, and puzzling over the controversial phenomenon that is The Last Jedi. Tell you what, let’s do the latter thing together, in a new chapter of our The Guardian’s pass notes wannabe series Movie Chitter-Chatter. 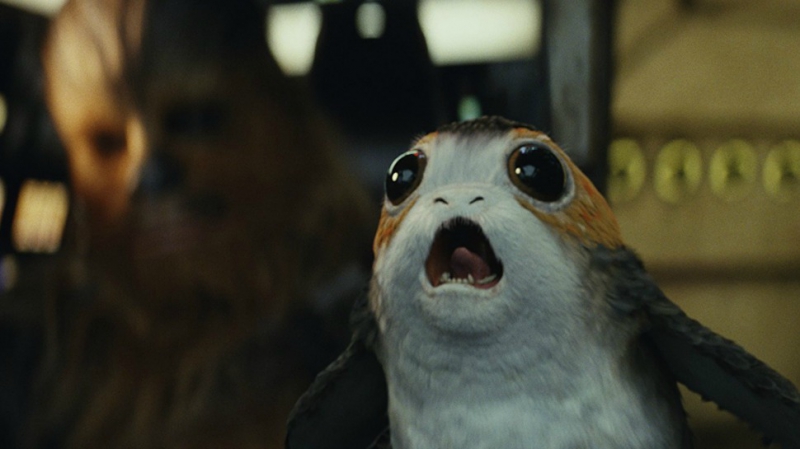 Name: The Last Jedi, but The 2h33m-Long Reylo Fanfiction and Oh Wow, What Kind of Cinematic Marmite Was That? are also commonly used.

Age: Going on two years old, but some people wish it never existed.

Got it. Appearance? This sums it up pretty well, but don’t click on it… Don’t. Oh no, you did. Well, don’t blame me for your randy nightmares. I fed it to you in the meme form especially to soften the blow, so my civic duty is done here.

*Spits coffee*. My seat neighbor at the screening couldn’t believe it, too. He duly left soon afterwards, leaving me a nice free space to dump my kingsize bucket of popcorn in. But I think that it was The Smut Hut Scene that ultimately did him in, though. He should be grateful he never got to witness The Thigh Grab. Or The Botched Up Space Proposal. Or The Emphatic Swipe Left On The Force Tinder. That one he would’ve approved of, I feel like.

Bloody ‘ell. Did all this really happen in Star Wars? Uh-huh.

Like, the same Star Wars that’s for kids and weirdos who ask for a Samuel L. Jackson purple limited-edition lightsaber for their 30th birthday? Ah, but it’s a very good lightsaber. I’m currently bidding for one on eBay. It makes hissing noises and gives you a Mace Windu quote if you’re lucky. And The Last Jedi is rated PG-13, by the way.

That’s stretching it. Isn’t The Force Awakens also rated PG-13? That is correct, “for sci-fi action and violence”, though Entertainment Weekly begs to differ, saying that the TFA rating “couldn’t be more vague and unhelpful… in the vast world of science fiction, ‘action violence’ could encompass anything from blasters going ‘pew-pew-pew’ to Alien chestbursters.”

Well, is there any pew-pew-pew in The Last Jedi? There is, big time. So much so that the warring camps in the fandom lay down their swords and unite in tentative consensus that TLJ plied us with some of the best fighting scenes we have ever been chanced to behold. And may you also rest assured in the knowledge that these words, meaning pew-pew-pew, are even at one point directly uttered by one (excellent) character carried away by the heat of the moment. And who can blame her? Rian Johnson did us good in that respect.

Do I hear you approve of Rian Johnson? You certainly do, and yep, unlike some people, I shan’t go as far as to say that Rian Johnson ruined my childhood. I’ll even smoothly sail over the fact that in his right mind, sound creative judgement and understanding of what Carrie Fisher means to the generations and generations of SW fans, he wrote her into a scene that aspired to be poignant but was ruined by some Mary Poppins meets Superman imagery that was simply stupid in its vividness. And I will refrain from proclaiming that from a credibly unhinged Vaderite in TFA, TLJ’s Kylo Ren turned into the kind of person who loves to cry in the rain because it hides their tears, though this was seemingly done for the noble purpose of proposing a more nuanced concept of masculinity, which does get my seal of approval. Plus, TLJ Kylo is hawt, and RJ knows it, so that’s that.

Uh-oh. And no, don’t tempt me to throw shade by saying that the kick-ass Captain Phasma and less kick-ass, but still mildly frightening (in TFA that is) General Hux didn’t get enough screentime. I mean, why slight Domhnall Gleeson so much? Look at Hux letting rip in TFA and tell me that there wasn’t any missed potential with this character, for crying out loud. Coz I am crying out loud.

Oof. That was cold. Now I need to buy a Porg toy to cheer me up. Well I hope it feels good, succumbing to Mickey Mouse capitalism like that. Why in the stuck-up, half-witted, scruffy-looking nerf herder’s name are people so obsessed with porgs? Porgs suck. They damn sure don’t get my seal of approval. May they all be Order-66’ed and get the youngling treatment. Argh.

What’s there to like, then? Many things, actually. The character development is just *chef’s kiss* great. The cinematography and editing are outstanding, though a fussy cinema-goer, which I’m obviously not, may pick on that Disney gloss which just wasn’t there in the more grainy and old-school filmcraft of TFA, but it’s a matter of personal preference. The way the plot is narrated is commendably very inventive. And I very much enjoyed the fact that TLJ tried to break that superhero cliché mold. Like, it showed that good guys can have flaws, massively screw up a lot of people, and even throw a mutiny because other good guys’ plans weren’t good enough for them. And that, likewise, bad guys can give you a helping hand provided that they like your face well enough. Balance, yo.

Don’t say: Let the past die! Kill it if you have to! And with it, a handful of our favorite characters. Rawr.