Crunchy, refreshing and super easy to make – Russian dill pickles pack in all the autumn flavor and none of the fuss, turning you into an instant celebrity chef. 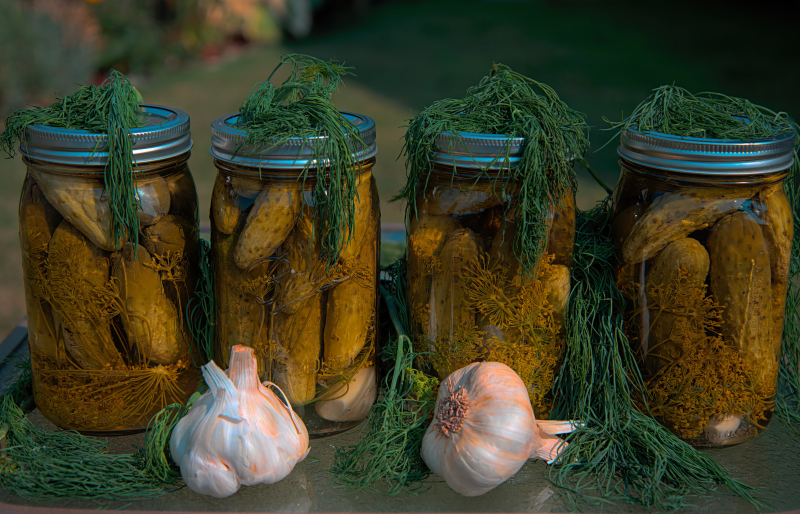 You’ll see them in movies, as a side dish at parties, in good company of black bread and salted pork belly, sold from wooden vats in markets and in plastic containers at supermarkets. They’re are a Russian icon – dill pickles – and you can still get in on their season.

Russian dill pickles are different from any of their Western counterparts. For starters, they generally fall into two categories: малосольные – as in “low salt” and соленые – “salty”. The first have a more delicate flavor with a jolt of garlic and dill while the second can be a hangover cure. You’ll never find them sweet or soggy: crunchiness is the name of the game.

When we were little, my granddad, who had a PhD in engineering, constructed a greenhouse for the sole purpose of growing cucumbers for pickling. It’s not that he couldn’t afford to buy them at the store - he wanted the bragging rights for the best crop and best flavor. Our kitchen was turned into a canning facility with glass jars, boiling water and a special apparatus for sealing the lids. A couple of jars exploded over the winter but the rest brightened up most of our holidays during the dreary seasons.

It wouldn’t be surprising that I’ve always associated canning with a cumbersome process, but I read a recipe by a Russian magazine publisher-turned-cookbook author Belonika. As she puts it, “There’s an abyss between simplicity and effect… You’ll see what I mean.”

Directions: Wash the cucumbers, cut off the ends, put them in a clean class jar or a plastic container together with dill. Peel the garlic into cloves and slice them. Add to the container. Pour water into a separate container and add salt. Then pour the solution (the brine) over the cucumbers to completely cover them, close the lid and put it in the fridge for 24 hours. That’s it!

In terms of ratio of effort to outcome, it doesn’t get much better. The solid ten minutes of your time spent on making the picks will translate to a healthy snack you might be fishing with your fingers straight out of the jar.

Your friends will ask you – “Did you do make this yourself?” And you’ll nod and say that it was super difficult.