Aquaformations and Communication With Nature: Artist Talk With Robertina Sebjanic

On January 21, ITMO University’s Art & Science Center hosted a meeting with Robertina Sebjanic, an artist and a researcher. ITMO.NEWS provides the rundown. 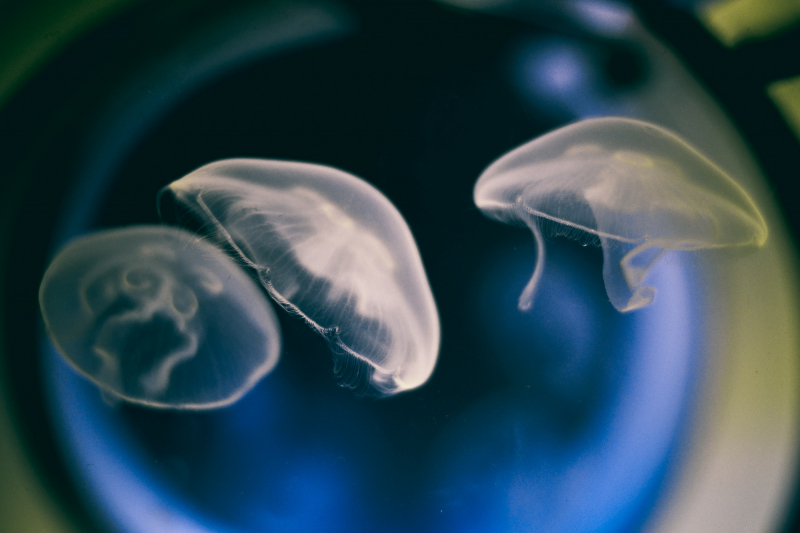 Over the past seven years, the central focus of the artist’s work has been the study of the aquatic environment and the impact that humans have on aquatic ecosystems around the world. Robertina Sebjanic turns the results of her research into installations, performances, and music albums. Her work has been exhibited at major festivals such as Ars Electronica and CTM, as well as in galleries in Berlin, Paris, and New York.

Last November, Robertina Sebjanic delivered a talk on the problem of water pollution in St. Petersburg for ITMO’s Art & Science students. This study became part of her ongoing large-scale project titled Aquaforming in the Age of Aquatocene.

During the meeting, the artist spoke about her scientific research, collaborations with jellyfish, unexpected discoveries, and the need to educate people about the true extent of water pollution.

When working on my project, I spend a lot of time in various research centers and sea stations. I started my first serious research on this topic in 2014. After the triennial of contemporary art in Izmir (Turkey), I was invited to work for three months at a marine research center. The idea was to find ways in which scientists and artists could interact, and develop new means of such collaborations. Then, we focused on the study of jellyfish. It was winter, and for some reason, the beaches of Izmir were bombarded with jellyfish. As such behavior is not typical for this species, scientists strived to study this phenomenon and figure out its cause.

I became very passionate about these mythical creatures. I discovered a species of biologically immortal jellyfish, Turritopsis dohrnii, in the Mediterranean Sea and Japan. It is the only animal that can revert to the polyp stage again after having reached maturity as a solitary individual. Theoretically, this process can go on indefinitely, effectively rendering the jellyfish biologically immortal, although in practice individuals often fall prey to predators or diseases.

My passion for jellyfish resulted in a two-year project named Aurelia 1 + HZ. One of the project’s parts is the interactive Proto Viva Generator installation, which addresses the possibilities of coexistence of animals and machines. I wanted to reflect on the issue of the biopolicy of prolonging life: jellyfish are among the most tenacious creatures (even immortal), and robots inherently cannot die.

The second part of the project is the Proto Viva Sonification performance, which looks into the interaction of other species with humans. Several Aurelia Aurita, the most common jellyfish, are placed in a large aquarium. Their movements and contractions are recorded by a camera and translated into a digital code. This code includes a large collection of pre-recorded sounds.

The point is, humans share Earth with many other living beings, and moreover, have a huge impact on the environment they live in. However, we cannot engage in dialogue with them and cannot ‘hear’ their needs. So, this is a way to show that other beings can also express themselves through generative music.

I spent the next few years exploring different aquatic areas and recording underwater sounds using hydrophones. When I first came up with the idea for my Aquatocene / Subaquatic Quest for Serenity project, I thought of getting mystical, soothing sounds, although, in fact, water is marred by human noises (constantly scurrying ships, boats, submarines, etc.).

We do not even realize the level of noise pollution but it can cause serious threats to marine life as sea inhabitants use sounds to communicate with one another and navigate in water. This is particularly true for the deeper layers of the ocean where there’s no light at all. Their inhabitants live in permanent darkness, so there is no need for vision or even eyes. And if we, for example, can close our eyes to avoid seeing something, they cannot cover their ears to escape the noise.

Since 2016, I have been recording marine sounds in different parts of the world: in the Adriatic and Mediterranean seas, the Atlantic Ocean, and the North Sea. This work later transformed into a collection of compositions, and a series of workshops, performances, and installations. Their main purpose is to inform a wide audience about the existing problem.

In 2019, I arranged a group listening session right on a beach of Vlieland in the Netherlands. At the same time, I do not strive to make my work easy-to-understand (my performances are always followed by workshops) but to create a platform for discussions and collaborations.

I am trying to reveal the real impact of humans on the aquatic environment and water areas and its possible consequences. Now, people are concerned with the threat of microplastic pollution, yet few think about how the migration of entire species of marine animals fleeing from the noisiest coastal places can affect us.

In 2018, the chemist Gjino Sutic and I conducted joint research under the aegis of a research institute in Dubrovnik and the residence of Ars Electronica in Linz (Austria). Together we studied two water areas (the Adriatic coast in Dubrovnik and the Austrian part of Danube) and found an abundance of antibiotics, sedatives, antidepressants, barbiturates, and painkillers in water samples. In fact, we were struck by the high figures.

Then, we carried out a series of experiments with different microorganisms – particularly, with Spirostomum. We observed their reactions to ibuprofen and paracetamol and found out that certain concentrations result in the death or decomposition of the ciliates. Videos and photos of their disintegration were displayed as photobooks and installations first at the Ars Electronica festival in Linz, and then at the WRO Media Art Biennale in Warsaw.

We then presented this special project at the Ars Electronica: In Kepler’s Gardens festival in 2020. This was an attempt to create a global platform that would bring together those who care about the planet so that we could together spread this attitude further.

The Adriatic Garden project connected two places by the Adriatic Sea: Dubrovnik (Croatia) and Koper (Slovenia) and became a follow-up to our joint research with Gjino Sutic, which we named Aqua_Forensic. This project was a series of citizen science workshops involving the citizens of these two cities, as well as immersive videos and audios that were streamed online and made it possible for the audience to experience the soundscape of the underwater world of the Adriatic Sea.

Now, I mainly focus on projects in citizen science. In 2019, I was invited to study the ecosystems of the Manzanares at the Mutant Institute of Environmental Narratives (Madrid). The study involved about 600 residents of the city. We divided them into 40 groups, and each had to take samples in a specific region of the river and analyze the composition of water, level of its pollution, algae, and microorganisms presented in the sample.

As a result of this project, which we called Riology. Empathic Strategies in Deep Time, we released a brochure with not only the research’s outcomes but also recommendations on ways to manage water resources and help the environment.

Last year, a similar workshop was held for Art & Science Master’s students at ITMO University. The online workshop included a full-fledged course with 32 hours of practical training. Participants were to analyze water samples in St. Petersburg and the Leningrad Oblast. As part of the course, they learned to make DIY indicators, carry out chemical analyses, and ultimately use this data to create their own artistic expressions and projects.