Having graduated with a Bachelor’s degree in soil science from St. Petersburg State University, Asya Kaplan made a radical career change and joined ITMO’s Art & Science Master’s program. During her studies, she successfully organized several exhibitions and is now a curator at ITMO’s Art & Science Center. How does one create a science art exhibition and why is this artform gaining in popularity? Read on to find out. 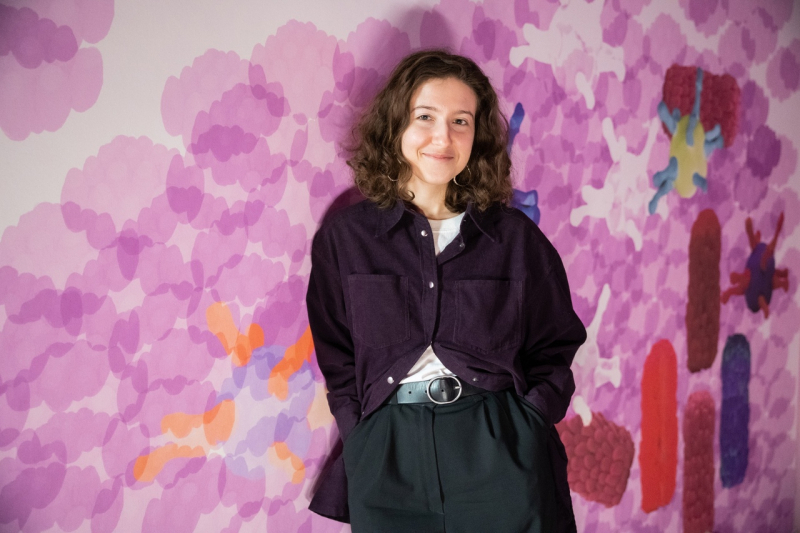 Tell us a little about yourself. Why did you decide to transition to another field for your Master’s degree?

When I was choosing my Bachelor’s major I didn’t really know what I wanted to do. I liked chemistry and biology, but I didn’t fancy becoming a doctor, biologist, or pharmacist. Soil science sounded really vague, but the courses in the curriculum seemed interesting and the practical training promised to be cool, too, so that was what I landed on.

Unfortunately, I ended up getting burnout at the end of my studies, which was why I was craving change – soil science wasn’t something I wanted to be doing for the rest of my life. Moreover, I was into art, so the Art & Science Master’s program at ITMO was the right fit.

What did you gain from studying at ITMO?

At the program, you can grow as an artist and as a curator. I got to meet many interesting people, including scientists, and try different artistic practices. For instance, the program’s curriculum features a course in bioart, where we worked at labs guided by scientists. We also worked a lot with our hands – I don’t think I would’ve ever used a solder or worked with iron, for instance, if it wasn’t for the program.

Over the course of your studies you organized several exhibitions. What was your first one like?

Ironically, my first exhibition took place at the Central Soil Museum and my knowledge really came in handy when my groupmates and I were trying to interpret soil from the humanities’ point of view. Moreover, I already knew the museum quite well from my practical classes as a Bachelor’s student. We used the permanent exposition as our starting point when planning the exhibition. The artists presented contemporary and science art objects based on the perception of soil via sound, touch, and even taste.

What other projects did you work on?

During our studies, we had small showcases where all students presented their projects, as well as major events, such as the international festival Ars Electronica, in which we participated as artists.

I also had the opportunity to create Beneath the Pavement, Not the Beach, an educational program that was my first independent project as a curator. The program featured lectures, reading sessions, and conferences that were the first stage of Grounding, a project ITMO developed with the Central Soil Museum. With this project philosophers, artists, scientists, and curators attempted to redefine the relationship between humans and soil as the main source of our existence. The exhibition itself took place after our graduation and in this way became our debut as curators.

What are you involved in now?

After graduation, I started working at ITMO’s Art & Science Center as a curator of educational projects. The most recent one is the STAGE 2022 exhibition of graduates of the Art & Science program, as well as students who joined the Art Project as Thesis initiative.

We were inspired by the location, the former Church of Peter and Paul of the Imperial Commercial College, and wanted to merge the past, the future, and the present. In their works, the artists ponder on the links between generations and the nonlinear flow of time through experiments with form and borders of art. They turn to the echoes of time, recreate images from the past, or try to bring the future closer using VR, interactive installations, audiovisual environments, bioart, and neuroart. The exhibition is open until July 24, so there's still time to check it out.

How do you choose a topic for the exhibition? Who else takes part in this process?

Most often we base the concept on the works submitted by the artists, but everything depends on the tasks. If it’s an exhibition of graduates’ works, then there are no conceptual limitations and each artist gets to present their own interdisciplinary study. However, it’s the curators who set the topic in the majority of cases.

There is also a huge team behind every exhibition. In our case, we have to credit a lot to our technical director Alexey Feskov, who can do a lot and even more. He is responsible for every technical aspect of our exhibitions. Our team also includes coordinators and volunteers who help to mount the installations, as well as other employees of the Art & Science Center.

What are the challenges of being a curator of science art exhibitions?

I would say that it is the issue of choosing the right location. For instance, if it is bioart, where the exhibits are mostly live organisms, you need to create laboratory conditions, which is hard to achieve at galleries. There are also technical challenges that stem from the fact that the art objects are often complex structures that require monitoring and maintenance over the course of the exhibition. These tasks are also in the hands of curators.

Is it true that science art has been gaining popularity in the past several years? And what do you think will happen next? Do you believe it is a trend that will fade away?

Compared to what we saw a couple of years ago, science art is definitely more popular among Russian audiences. I believe it is connected with the appearance of institutions developing this field. For instance, there are now programs training artists to apply the scientific approach. Moreover, there are many exhibitions in cities, where people can interact with this artform. For example, in the winter of 2022 Khristina Ots and I organized the Paranature Institute exhibition at Marina Gisich Gallery with works of Art & Science students.

I think that science art is a logical step in the development of art – and it’s here to stay.