Alexey Feskov graduated from ITMO University almost ten years ago. After he received his diploma, he got a chance to work on several projects at Russia’s major companies Sberbank and Gazprom before he decided to change his career and come back to his alma mater. Now, Alexey is the technical director of ITMO’s Art & Science Center where his team managed to develop a brand new exhibition space for the works of Art & Science students and renowned contemporary artists. ITMO.NEWS talked to Alexey to learn more about how he found his niche, why he decided to quit his corporate job to start a creative one instead, and how different skills can make a great combo. 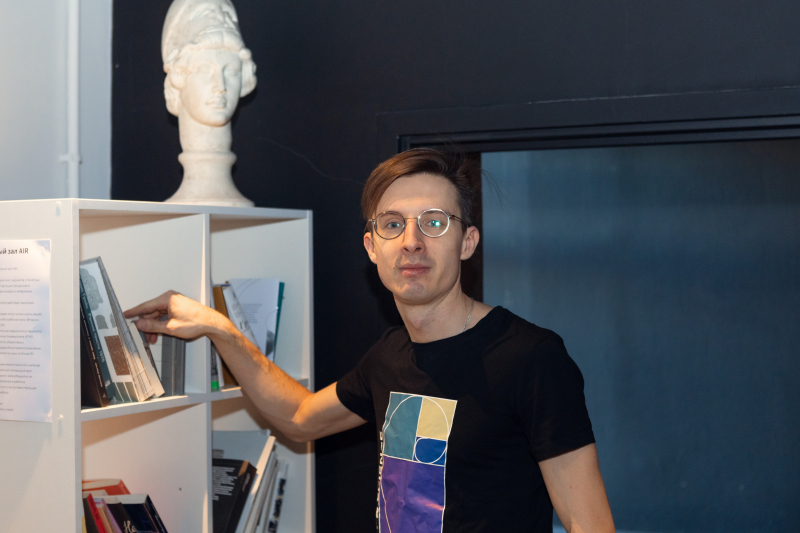 What did you study at ITMO?

I studied at the Department of Control Systems and Informatics (what is now the Faculty of Control Systems and Robotics) during my Bachelor’s and Master’s programs. When I enrolled at ITMO, I specialized in automation but then, in the third year of my studies, we began working on different robotics projects, as well. And now, this is the main specialization of the faculty.

I developed algorithms for stabilizing drilling platforms. During our practical classes, we tried to use these algorithms to achieve vessel stability. To do so, we constructed a pool right at our faculty and put loads of tiny vessels there with in-built control circuits and several engines. I’ve been into model boating ever since I was a kid. So, when we had to find a way to apply our stabilizing algorithms, I immediately suggested trying vessels because that was something I knew a lot about.

Apart from our vessel project, my classmates and I came up with an idea to establish our own robot testing laboratories. We purchased various manipulators, including LEGO Mindstorm, which were in back then. I believe we had more than 50 various tracks connected to parking cars, controlled drifting, drones, walking robots, and exoskeletons when I was about to graduate. These tracks grew into separate laboratories, which still operate at the faculty.

What did you do after graduation?

I started working at an IT company that sold design software. I was a sales manager there. I visited every machine-building factory in St. Petersburg and met engineers who created 3D models. I had a passion for 3D modeling and technical drawing since school, which made my job feel easier and even more exciting.

After I left the company, I joined Gazprom and switched to communications. Its divisions such as Gazprom Telecom and Gazprom Space Systems are all engaged in Wi-Fi technologies, aerospace systems, and so on. It was a time when the company was about to move to St. Petersburg and had multiple projects going on, among which was, for instance, the construction of the Lakhta Center. I was in charge of communication systems in those projects.

Then, I got a job at Sberbank. Designing and introducing novel products was something new for me. Even though I took a programming course when I was at school (by the way, it was at ITMO), these skills had never come in handy until I joined Sberbank. There, I managed to program a small product all by myself. It was a service for paying utility bills that allowed you to do so by only entering your home address. But then it became clear that it was not where my heart was. Having worked there for two years, I decided to quit and try something new.

And that’s when you returned to ITMO, right?

I got an invitation but it was a pure accident. I know many people who work here and they are the ones who told me about the new program in art & science that was about to launch and I was immediately interested.

Frankly, up until that very moment, I was sure that I’d never come back to ITMO. My friends invited me to join but I always turned such invitations down. Back then, I believed that the university stood still and wasn’t going anywhere. But I admitted that I was wrong once I visited my alma mater, saw how the main campus had changed, and learned about all the new specializations that appeared over the years. Several factors came together and I decided to try. The university upgraded drastically and started to look towards the future, and I had all this valuable experience under my belt.

It appears that all these skills I’ve acquired working in various fields finally came in handy as if I’d been preparing for this job all this time. Years of working at major companies and dealing with their bureaucratic systems, picking up sales and technical skills, as well as being involved in various construction projects – all these experiences and even some other less critical ones began to make sense.

The Art & Science Master’s program had been running for only two years when I got onboard. That was just the beginning and no one could even dream of any laboratories, workshops, or exhibition spaces that might appear here in the future. When we got a spot for our art center on Birzhevaya Liniya, I was offered to design it, and, in fact, make it happen. Before the space became our center, it was a 24-hour store, the owners of which even left us some display cases and special shelvings. People asked us about where the store went for quite a long after that.

All the knowledge I got while working at Gazprom and my dad’s construction firm was extremely useful when it came to this project. This experience made it much easier for me to handle this large and unusual construction, you might even call it rebuilding since we literally turned the whole place upside down.

When I was offered to develop the residency, I searched for similar projects online and I couldn’t find anything. My colleagues (there were only three of us back then) said that there was no program like that anywhere in the world so I should stop trying to find some kind of reference. So, we created all this almost from scratch: we had to figure out how to organize the space and decide what kind of specialists will work there and how they will do it all. We might have been wrong about some ideas but overall, we did everything we could to satisfy our artists.

What are your job responsibilities?

Our Master’s students create their own artworks and I help them find the necessary materials and specialized equipment, as well as rent the tools that we don’t have at our university. Sometimes, they need to collaborate with other university experts so that they could understand how this or that equipment or technology works. When it happens, I assist them, too.

The center also holds various exhibitions, and I’m responsible for their assembly and deconstruction. We rebuild our premises, put up new walls, create podiums, and construct hanging constructions for our exhibits. We often had to look for equipment at other university departments. For instance, the Megabyte staff always helps us out when we need projectors, screens, or even smoke machines. This summer, we had an exhibition, for which we needed medical tables. I’d been looking for them for quite a long time and finally found them at our cafeteria. I’m constantly somewhere exploring our university, reading every sign, and knocking on all doors because you never know when you will need someone who studies quantum particles, cancer cells, or anything else.

When exhibitions are on, I also help our artists with their exhibits and various equipment, sometimes I do their work, teach them, give them hints, and even propose ideas.

Have you ever done something similar?

Before I got this job, I had never been interested in art. Not that I didn’t enjoy it – I simply couldn’t understand it. Now, my colleagues help me with that. Together, we regularly visit contemporary exhibitions and share our impressions afterward. I’m learning to speak the language of art and it helps me a lot in my work.

Do you regret not going for robotics?

Well, I still do it here. I got requests from teachers and artists so I’ve never actually quit. Speaking of science, I’m going to pursue my PhD at ITMO’s Institute of Advanced Data Transfer Systems and my thesis will focus on an original topic. It’ll be something new for our center and even the whole university. It won’t be a simple paper on optics but it will include art, too.

What is it about?

My thesis will be based on the project that received a grant some time ago. This is a joint work with Natalia Fedorova, an artist and a lecturer. Together, we’d like to create a virtual reality, which will include 3D simulations of the audience. That is, once people put on their VR headsets, they will find themselves in a room where they will see their exact doppelgangers – a detailed copy with all the right textures and body proportions. This experience can be compared to a dream. When you’re dreaming, you might see yourself but you can’t control what’s happening and can only witness it.

The project refers to the metaphysical views of René Descartes who questioned if the world was real. Can we really trust our eyes and other senses? There is always a chance that the reality is different and our senses fail to convey it. That’s what we are trying to communicate to our audience using six plotted scenes that will feature metamorphoses while their avatars will do different things, sometimes quite shocking.

The technical part of the project that corresponds to the program’s goals is the development of a system that will capture a person from all angles. We think that these would be three lidars that will scan people from above, the front, and behind. After that, we will have to come up with an algorithm to process the acquired data, remove roughness and bumps, and apply textures as quickly as possible and in real-time. Plus, we need the right animation algorithms to make the avatar move naturally.

So far, there’s nothing like that. Usually, avatars are created using ready-made templates and the existing VR games can only feature your arms and legs. And you obviously can’t control your avatar. Plus, we want to replicate real-life objects in virtual reality so that the virtual space feels real. This will also be exciting and unusual as no one before has made it possible to actually interact with VR objects as if they were real.