Every Potterhead dreams of one day stepping foot into Hogwarts, Diagon Alley, Hogsmeade, and other legendary locations from the Harry Potter universe. Now, you can explore the Burrow, the Weasley family home, and even join the mischiefs of the Weasley twins in a VR game created by Anastasia Tsitelova and Artur Dzyuba, students of ITMO’s Faculty of Software Engineering and Computer Systems. 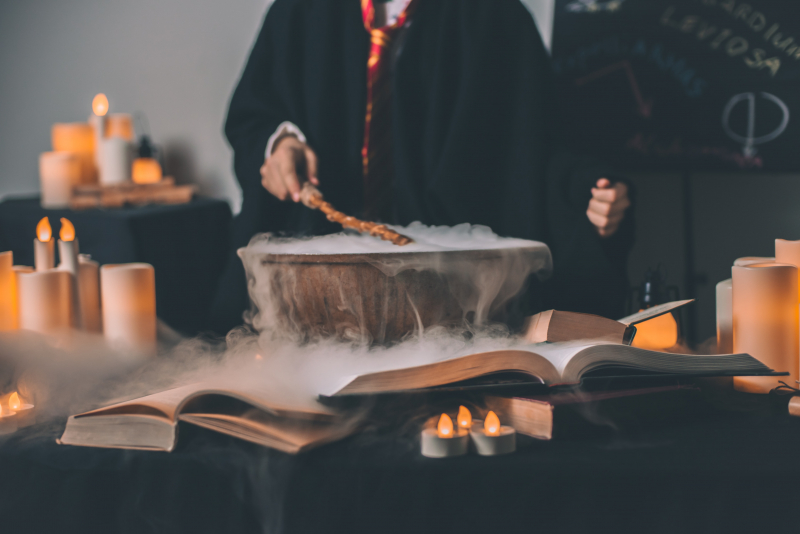 You’re a wizard… in VR

Anastasia Tsitelova, a graduate of the Faculty of Software Engineering and Computer Systems, has been a Harry Potter fan since childhood, so when it came to choosing her thesis topic, it was only natural for her to recreate the Burrow, the home of the Weasley family, in VR. After all, among all the graduate projects of the Computer Technologies in Design Bachelor’s program, Anastasia found the VR-based ones most intriguing.

“I chose the Burrow firstly because the Weasleys are some of my favorite characters and their home presents the opportunity to peek inside a wizarding household. Moreover, it’s a relatively small location, and it was shown in great detail in the films, which is why it was easy to make it recognizable,” says Anastasia.

In the game, the fans will find many Easter eggs with allusions to the franchise. However, the game will also have something for those who just love everything magic and fantasy. Users will get to play for Ron Weasley, who gets a letter from his brothers, the twins Fred and George, asking him to solve puzzles and send various objects over the floo network (a magical communication system connecting wizards’ fireplaces) to the Weasleys' Wizard Wheezes shop. At the end, players will learn a special new spell for all their efforts.

“For me, personally, the Burrow always felt like a place of warm family gatherings and pleasant buzz. That’s why I decided that the objects our players will have to find will be items from Weasleys' Wizard Wheezes, a joke shop. Each of these objects is unique and produces a certain effect when touched by the player. For instance, a yo-yo will squeal like a pig and the Peruvian Instant Darkness Powder will, well, cast total darkness for several seconds,” adds Anastasia.

Gesture and voice control are two of the game’s main game mechanics. For example, the hand tracking technology allows players to pick up objects and move between rooms by pointing up or down with their left hand. Some objects in the puzzles are hidden in locked locations. To open them, players will have to first find plaques with spells strategically placed all around the house. Players will be able to cast any of the game’s five spells by conjuring up their wand with a specific gesture and then drawing symbols with it in the air.

After a player has collected all the objects, they will have to send them back to the shop by pronouncing its name into the mic (just like when using the “actual” floo powder). The game is completed when all the objects have been successfully “burned” in the fireplace.

Casting real spells with your own wand

Completing a project in VR isn’t an easy task, so Anastasia was joined by Artur Dzyuba, a first-year Bachelor’s student in the Computer Technologies in Design program and an employee of the Center of Usability and Mixed Reality.

The students decided to divide their responsibilities. Anastasia was responsible for the game’s concept, storyline, and location. In developing the visuals, she relied on the books and films, as well as sketches from Brian Sibley’s book Film Wizardry, and Harry Potter Wiki. However, as not every corner of the house was described or shown in the films, Anastasia had to rely on her imagination to make the space feel whole and real.

“One of my main challenges was fitting together the information from all the sources. For example, the interior of the Burrow greatly changes between the films. We also needed to find a way to make the location recognizable and authentic, while keeping in mind that we couldn’t transport all of it into VR. In my pursuit of authenticity, I searched the books for Ron’s childhood nickname, mentioned only once in the series, and relied on actual Weasley twins quotes to make the letter as close to the one they could’ve written as possible,” shares Anastasia.

Artem Smolin, head of ITMO’s Center of Usability and Mixed Reality and supervisor of the project, helped the students with some of the game’s puzzles and features. According to Anastasia, thanks to their collective input, the game came out engaging and fun to play.

In the student duo, Artur Dzyuba was responsible for developing the game mechanics. He experimented with different technologies to see how they would function and how much time they  would take to implement. After settling on the concept and technological aspects, the team started testing them “on location,” then moving on to polishing the details.

“Every part of the game’s mechanics, starting from transporting the model to VR and all the way to voice control, was done by me. I think that it is precisely the combination of voice and gesture control that allows the player to experience the atmosphere of witchcraft and wizardry. Moreover, it’s canonical, according to the books and movies. The hardest part for me was to tackle voice control,” says Artur.

According to the students, even though the project is complete, there is still room for improvement. In the future, they are hoping to release the game for a wider audience.

“It would be great to add more objects for players to interact with, as well as more spells, the second floor, and other things. We can keep adding new things, because it truly is a cool project,” concludes Artur.