We’re witnessing a massive technological shift, which allows different fields, such as art and science, medicine and cybernetics, programming and anthropology, to intersect. What trends are especially relevant nowadays? Digital artists and experts in education gathered at the annual Yandex conference YAC/e to discuss this and many other related questions. 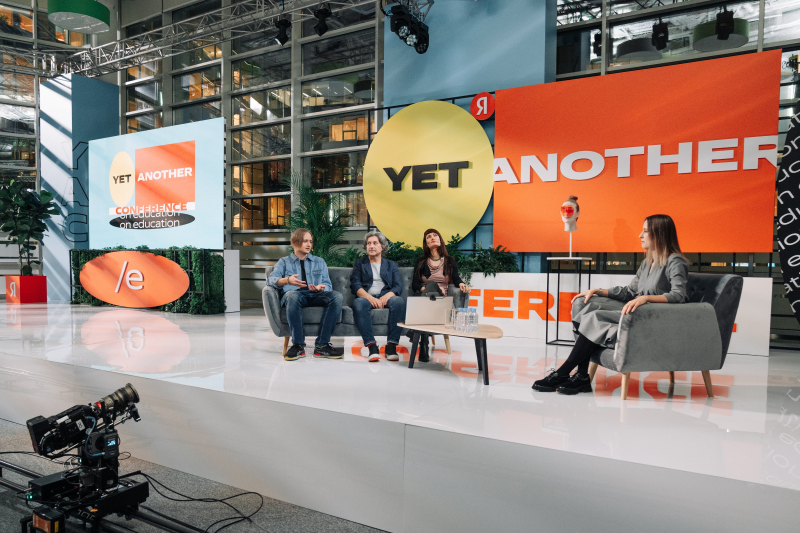 The metaverses we live in

Metaverse has been a buzzword lately, but almost no one understands what it actually means, although the term itself turns 30 years old this year (it first appeared in Neal Stephenson’s cyberpunk novel Snow Crash in 1992). It’s now typically associated with the virtual world from the movie Ready Player One, computer games, and VR glasses.

As Anastasia Tmur, a project manager at Yandex Academy, and tech blogger Sergey Romantsev explained in their presentation at YAC/e, in fact, we all have been living in metaverses for a long time without realizing it. This term refers to our simultaneous existence in the real and digital worlds. Take cashless transactions, for example: we transfer cash into digital values and use it for payment, but we can transfer it back to cash at any time. Or digital doubles – each of us has them on social media. The double knows everything about our interests and collects a personal feed based on them or suggests personalized music recommendations.

Still, when thinking of metaverses, we typically imagine multiplayer games like Minecraft and Roblox. However, both of them now present themselves as more than games – they’re also platforms for various events, including conferences, exhibitions, concerts, and educational projects, such as Frozen Planet II by Minecraft and BBC.

The educational potential of metaverses is yet to be realized. Among those who try to tackle this field are Russian companies, such as Masterskaya 15, who recreated a branch of Moscow-based Gogol’s House at Roblox and turned this museum into a whole virtual city. The same company helped create Yandex Academy’s universe at Roblox for the 8 Bit online festival for school students. Their team recreated the office of Yandex and the participants could visit driverless cars’ and robotics laboratories, check out the server room, and travel as delivery robots. At the same time, this was more than just a game – the universe included quizzes, tests, and real-life tasks regularly performed by Yandex employees.

Roblox is an open platform with its own engine that helps easily create content with ready-to-use scripts. It can be great for educational purposes – for example, a school teacher can use it to make their classes more fun and memorable.

Cybermedics and philologists who can program

The term “computer” actually appeared in the 17th century – that’s how they called people whose job was to carry out mathematical calculations all day long. Now it seems to be a rather strange profession. According to specialists in robotics, in another five years we will be equally surprised that people were involved in the delivery of food or packages.

Old professions are disappearing, but new ones are replacing them and they are even more innovative and amazing. Cybernetics doctors, data journalists, bioinformaticians, digital anthropologists, artists of virtual worlds – and all sorts of other combinations you can think of.

Such a transdisciplinarity leads to the diversity of career and personal growth paths, but it also requires knowledge in many fields, most crucially – coding (to a certain extent). However, it doesn’t mean that everyone should become a programmer. It’s actually possible to combine your skills from different areas.

Here’s what Lada Zimina, the vice head of ITMO’s Digital Humanities Center, had to say on the topic at one of the conference’s panels called Computer Science in Modern Schools – Why It’s Old-Fashioned to Draw the Line Between Humanities and Technologies:

“You don’t have to become a programmer and work at an IT company – you can still read your favorite authors, such as Pushkin or Shakespeare, but you can do it using code. It’s absolutely possible to combine being a programmer with being a linguist, philologist, philosopher, or anthropologist. It fits well into our IT-centric world and the field of digital humanities in particular.”

As an example, Lada Zimina talked about joint projects of ITMO’s Bachelor’s and Master’s students in digital humanities and local cultural institutions, such as the Peterhof State Museum-Reserve, the State Museum of the History of Religion, the Pushkin House, the European University at St. Petersburg, and so on.

Online Schools VS Universities: Best Education for a Career in IT

Artists of the Techno-Renaissance age

Art & science, i.e., technological art, digital art, or the art of new media, was another hot topic discussed at the conference. Even though lots of new projects appear in this field, they are still often misunderstood both by viewers and art experts, which is evidenced even by the variety of terms used to refer to this new field.

Anna Titovets, a media and video artist and the art director of the Museum of Cryptography, explains that media-, cyber-, web-, science-art, and so on, are all different types of art, as part of which the artist applies modern technologies, be that 3D modeling, VR technologies, mapping, sound installations, or robotics. The medium is as important as the message. Moreover, art & science aims to promote scientific and technological achievements and make them more comprehensible and less frightening for the public.

Aristarkh Chernyshev, one of the pioneers of Russian media art and a lecturer at the Rodchenko Moscow School of Photography and Multimedia, believes that artists at all times applied cutting-edge technologies, so modern art actually follows these traditions:

“We’re living in the Digital Renaissance era. Everything new is the well-forgotten old – during the Renaissance, artists also combined art and science – they studied chemistry, optics, came up with inventions, and made discoveries. For example, Luca Pacioli, the inventor of accounting, worked with the great artist and scientist Piero della Francesca, and who’s to say if he was primarily an artist, a scientist, or an accountant.”

Full recordings of the talks are available here (in Russian).