Since 2005, every second Thursday of November has been celebrated as World Usability Day (WUD), a day when UX and UI designers come together to share their cases and ideas on improving user experience. ITMO honors the occasion with its own international conference WUD@ITMO, which was held this year for the eighth time. Learn all about the main topics discussed at the event in this article. 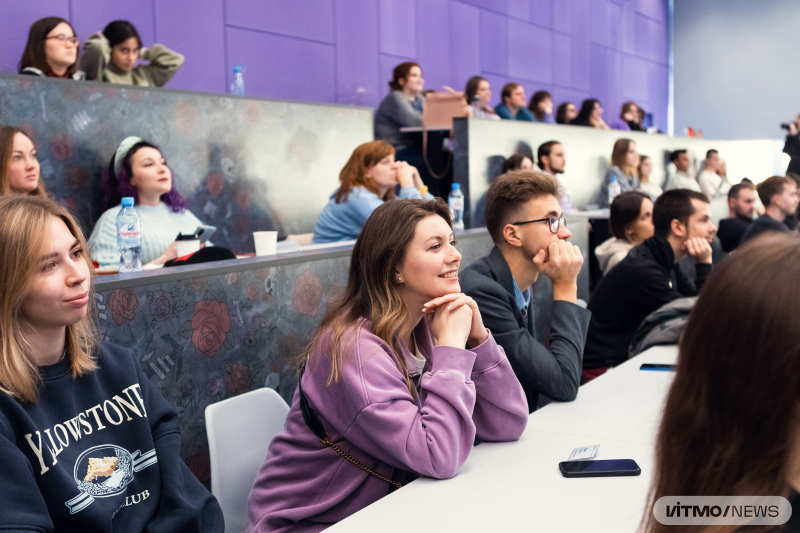 As per tradition, this year’s conference was organized by ITMO’s Center for Usability and Mixed Reality, Faculty of Software Engineering and Computer Systems, as well as students and faculty of the Master’s program Multimedia Technologies, Design and Usability. At the event that took place offline for the first time since the onset of the pandemic, visitors attended expert talks about internships, work experiences, and successful cases. Moreover, during breaks attendees could try their hand at solving cases offered by companies, discuss current problems in design, or look for teammates for their projects.

“This year, we organized the event in collaboration with ITMO’s Department of Youth Policy for the first time. They were responsible for networking activities and came up with a bunch of cool interactive sessions – it was great!” says the head of the Center for Usability and Mixed Reality, Artem Smolin. “Now, we will form a community of designers among ITMO graduates; after all, we already have the foundation for it. For instance, one of our first grads, Yury Solonitsyn, has been moderating WUD@ITMO for several years. Moreover, many of our graduates work at major companies, and our current students intern under their guidance. This conference is yet another reason to visit their alma mater.”

According to Lyudmila Tsoy, a manager at ITMO’s Creative and Corporate Projects Planning Center, WUD@ITMO is a platform that brings together experts, graduates, and current students, and the Department of Youth Policy strives to support this community in between the annual conferences with various meetings:

“We were happy to see that our graduates were all for the initiative, which means that the first meeting of this professional community has already taken place. We will announce all upcoming meetings – everyone interested is welcome,” adds Lyudmila.

Making it as a designer

According to Google Trends and Yandex.Wordstat, in recent years, users across the globe have become increasingly interested in UX design. What skills can help you enter this field? According to Vyacheslav Stepanov, the head of product at Oprosso, the company is primarily looking for ITMO Master’s students and graduates with knowledge and experience in UX research and UX design, as well as motivation to work and further their studies. Also of importance are independence, critical thinking, efficiency, as well as the number and quality of suggested corrections to their projects.

Anastasia Gudym, a second-year student in the Multimedia Technologies, Design and Usability program, landed an internship at the company last month. Her successful application included a CV and examples of her lab and practical training assignments. She passed two online interviews, at the second of which she had to defend her solution to a test case provided by the company. Now, Anastasia is conducting her own UX research and developing some new functions for Oprosso using her knowledge of UX methods, user scenarios, as well as CSS and HTML.

After two months of internship, Anastasia can expect to get a job offer from the company with potential to expand her responsibilities, following in the footsteps of Regina Bulatova, an ITMO graduate and senior UX designer at Oprosso. More experienced specialists take on more tasks, such as overseeing the product team’s interactions with other collaborators, as well as developing new functions and products and mentoring newcomers.

Andrey Zhilin, a lead designer at Open Mobile Platform (the developer of Aurora software), used his experience to explain how developing an interface for an operating system is different from designing an application. With an operating system, designers have to consider several directions in which it can develop and come up with solutions for completely different user scenarios. This calls for deeper testing and multilevel certification of all code for security purposes. All of these issues need to be taken into account from the start.

Your first users are your employees

What if you have a product but don’t know how to find your audience? Roman Shishkin, an ITMO graduate and a UX architect, solved this problem by combining team building and dogfooding (the practice of using a company’s own products). At a meeting, he asked his coworkers to make short presentations about themselves using a presentation software he developed. After the meeting, he collected feedback about the product’s drawbacks and thought of ways to fix them. As a result, he had identified and overcome nine potential issues, while his colleagues got to learn more about each other, test a new product, and have a great time.

Sometimes, however, it is not so easy to test a product. For example, when developing healthcare software, designers often discover that their customers, clinicians, are very busy, while the cost of an error can be too high to pay. Alena Gencheva, a Master’s student in the program Multimedia Technologies, Design and Usability and a lead product designer at Cloud Medicine (Облачная медицина), shared her experience of working with such cases.

According to Alena, cognitive psychology can be a handy source of user behavior and thus help develop a more convenient interface. For instance, in medical practice, each biological substance is placed in a container with a lid of a specific color. Whenever venous blood is taken, the specialist has to remember it has a purple lid. But what if they are under stress and forget about it? In order to avoid such mishaps, the designers included information about lid color into their interface. Moreover, various design features can be used to facilitate decision-making or learning new features of an application.

Nikita Efimov, the head for product at Sound Business (Звук Бизнес) and an ITMO graduate, believes that there is a global trend towards multifaceted interaction experience in UX, which is especially relevant for healthcare, where a client’s experience is of particular importance. Nikita recommends journey mapping for analyzing interactions between a clinic and its client, as well as the feelings they experience.

“In Russia, emphasis is laid on providing a great experience during a patient’s visit – for instance, they might be offered tea so that they form a more pleasant impression of visiting the clinic. The Western approach takes into account what happens before and after the visit as well. For instance, children with diabetes have to take medication and stick to a certain diet. In Russia, they would only be given these recommendations, whereas with a broader approach, the responsible physician keeps track of the child’s progress and helps them change through playing various games,” illustrates Nikita Efimov.

Between the expert talks, visitors of the conference could not only interact with their peers, but also test their knowledge in the field by solving various cases, taking quizzes, playing association games, and even developing projects for potential customers based on their technical descriptions. Those with the best ideas received gifts from ITMO.

There were also opportunities to pick up some new skills for those only starting in design. At workshops held by Alexandra Sharaeva, a Master’s student of multimedia technologies, design and usability, visitors of the conference learned about user stories, competitive analysis, and user path visualization; those who took part in Nikita Efimov’s workshop learned useful tips for conducting user interviews. Anna Semenova, head of the VK Calls team, reviewed portfolios of ITMO students and talked about some common mistakes made by designers when compiling them. Creators of the best portfolios received gifts from VK and were invited to the company’s Singer House office.