ICO-Hypethon: Will Bitcoin Take Over The World?

ICO-Hypethon, a unique conference and hackathon in the field of cryptocurrency has recently taken place in the Street Art Museum creative space. Experts and users of bitcoin, blockchain technologies and platforms for attracting crypto-investments gathered in St. Petersburg to discuss the prospects of cryptocurrencies, their legal status and role in modern economy. The event also featured a hackathon of ICO projects. 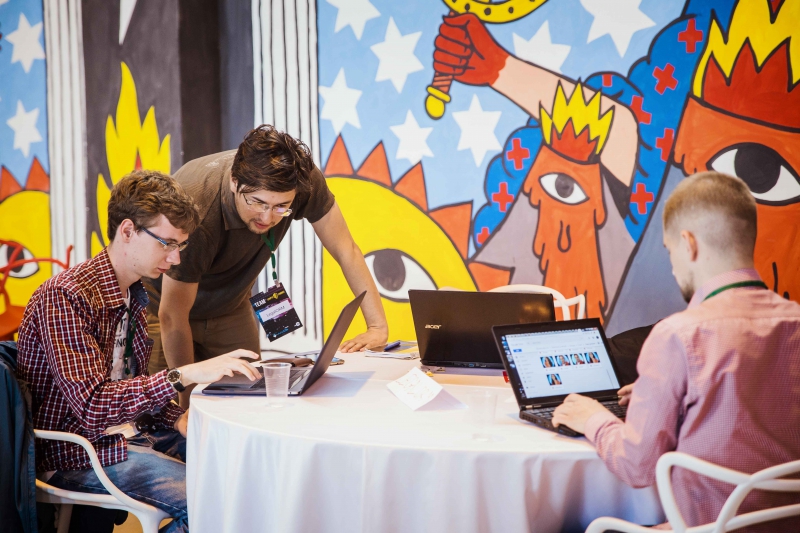 ICO-Hypethon's main goal was to give teams of ICO-projects an opportunity to receive guidance from experienced mentors, as well as communicate with ICO-angels. Also, such important subjects as the current state of cryptocurrencies and the markets that make use of corresponding technologies were discussed at the event. Correspondingly, ICO-projects are projects aimed at attracting investments by releasing tokens. In most cases, they take the form of startups, so their authors' ideas can be really “raw”. At ICO-Hypethon, teams working on such projects could get advice from such specialists in the field of cryptocurrencies as Jon Matonis, head and founder of Bitcoin Foundation, Alexander Ivanov, CEO of Waves Platform, Ton Weis, expert in the field of finance and cryptocurrency, Erik Benz, managing director of CryptoPay, and many others. The prize pool for the event was contributed by ICO-angels who received special bonuses for it, including a 50%-discount on the hackathon winners' tokens.

During the two days of the event, the world's leading experts in cryptocurrencies made their presentations. Tom Weis, a renowned specialist in bitcoin and founder of the LibertyLifeTrail website spoke about the reasons behind bitcoin's popularity and demand fluctuations, as well as its future and best applications. The speaker worked as a risk analyst for Wall Street, was vice president of JPMorgan Chase bank. Since 2013, he's been devoting his attention to cryptocurrencies. We'd like to share the main points of his presentation. On Internet and e-currency

"In 1998, the economist Paul Krugman said that the Internet won't have a major influence on the society. He believed that it will work as some fax machine, i.e. be used for particular operations, and nothing more. Time showed him wrong. In 1999, Milton Friedman stated that Internet will become one of the main factors that will contribute to diminishing of the state's role in economy, yet that will call for an independent e-currency. Friedman waited for it to appear; unfortunately, he died in 2006, before the first cryptocurrency emerged in 2009."

On the cost of bitcoin

"In 2011, the prices on bitcoin started to grow, as many expected that Wikileaks will start accepting donations in cryptocurrency. Same year, New York senator Chuck Schumer described bitcoin as a money laundering technology in a TV appearance. At that time, bitcoin went up to 30 dollars, followed by the first crash, and it went down to only 2. Yet, after the Chinese channel CCTV advertized bitcoin to its half a billion viewers, the price went up again and reached 15 dollars. The reasons behind these fluctuations are simple: if there's a demand, it gets up. Everyone buys it and then starts selling - it goes down, as simple as that."

On why people but bitcoin

"There is a small island state in Europe, Cyprus. In 2013, they've closed all the banks there and announced that they will hold back 6% of the investments, 10% for those who had more than 100,000 euros on their accounts. In the end, they held back more than 40%. It was then that I've decided that I should buy bitcoin. No one will be able to take it from me. My colleagues laughed at me: why? That won't ever happen in the USA! And I answered: why not? It can happen in any country: the banks will close and take your money." On bitcoin and payments

"In 2013, everyone believed that we should perceive bitcoin as some regular currency that we use when shopping. Yet, if we did that, the shops would not keep bitcoin, but sell it right away. This shouldn't happen, as it will lead to bitcoin going down. Cryptocurrency is good for such deals when people plan to keep it, not sell it right away."

On the popularity of cryptocurrency

"There are several reasons behind cryptocurrency's popularity. By using it, one can make donations to organizations you can't support otherwise. You can make bets, or take money outside the country. Some time ago, you could do it with gold, yet now it's no longer that simple. Cryptocurrency, on the other hand, is not controlled by anyone, so if something bad happens in a country - war, crisis, etc. - people can leave it with their money."

"Hard cash is a problem for any state. Harvard Business Review recently posted a report on how state governments plan to reduce cash turnover. Cash is dangerous, as it can be used to avoid paying taxes and work in shadow economy. For instance, in the USA they've already forbidden to use cash when selling property. So, if you were to sell your bike, you can only get a bank check or transaction as payment, not cash. In other countries, they propose registering all property that costs more than a particular sum, even if it's a bottle of good wine we're talking about." On ICO and tokens

"I believe that for the ICO system, we have to make it so that there is a stable "price" for one token. Why? Let's say Amazon starts selling its shares and accepting them as payment for its goods. And I'm planning to buy a T-shirt today. Yet, I would definitely think something like: what if it gets cheaper tomorrow?"

Another of ICO-Hypethon's speakers was Elina Sidorenko, head of State Duma's interagency task force on evaluating the risks of cryptocurrency turnover and professor at the Department of Criminal Law, Criminal Procedure and Criminology of the Moscow State Institute of International Relations.

The expert underlined that now their task force is working on the issue of legal regulation of cryptocurrency. She stated that there should be no rushing such decisions, as once the legislation is approved, there will be no turning back.

"How should the government react to fluctuations of bitcoin prices? This is a most volatile product, and the state is to guarantee a particular compensation. ICO is a very interesting case, mainly because it can be used to quickly earn money. Soon, we'll be witnessing the first payments for tokens, and we'll see how it goes. Will there be any at all? That is a serious question, as cryptocurrency still has no legal status."

According to Ms. Sidorenko, there are currently several problems with the legal status of cryptocurrencies. For instance, if one falls victim to fraud, they won't be able to get help from any of the law enforcement agencies. As of now, anyone can use cryptocurrency, but it can't be used for payments, at least legally. And there are many shady schemes for using it. Therefore the situation with cryptocurrencies is yet to be regulated.