This Wednesday, students, staff, and friends of ITMO University took part in the 10th Bike Ride with ITMO’s Rector Vladimir Vasilyev. Traditionally held every spring and fall – the start and end of the biking season, – the event sees students, professors, researchers, and associates of the university ride together on a route past the picturesque locations of St. Petersburg’s Primorsky District: from the Victory Park, past the Zenit Arena stadium and Yakhtenny Bridge, and to the 300th Anniversary of St. Petersburg Park. ITMO.NEWS spoke to some of the event’s long-time participants to learn about their favorite experiences, the role of biking in their everyday life, and their suggestions on making the ride even better. 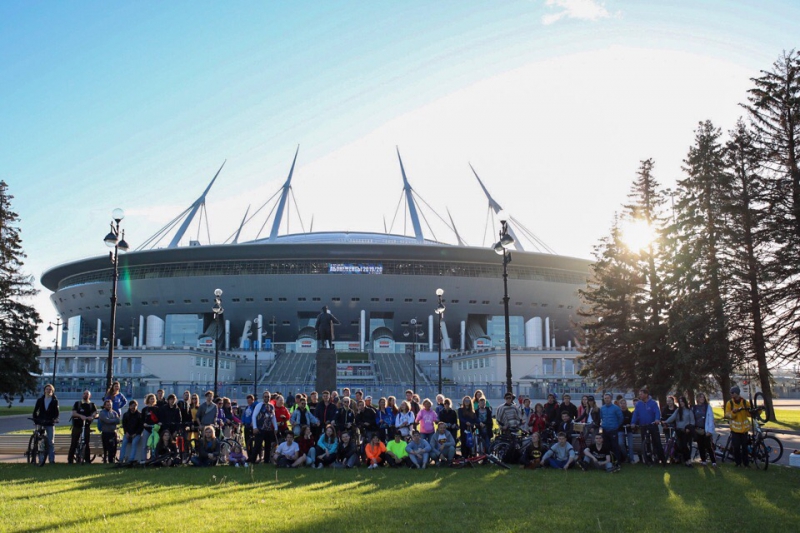 10th Bike Ride with the Rector

We try to come up with something new for every bike ride. This year, for example, we encouraged people to come dressed as superheroes. On another occasion, we were accompanied by our rowing team, who followed us along the shore of Yelagin Island. Our mascot, Tim the Snow Leopard, changes his modes of transportation: he’s already ridden a gyroscooter, a bike rickshaw, a scooter, and more.

I’ve been riding a bicycle since I was five. It was an integral part of my childhood. Since I moved to St. Petersburg, I only get to ride twice a year when we ride with the Rector. Sometimes my friends and I rent bikes, but as for staying in shape, I prefer to use my legs and jog in the mornings.

We always stop to take some pictures with friends and then try to catch up with the main column before they take the group photo. This chase is usually lots of fun. I think it would be good to add some more contests during the ride, in addition to the reposting and picture contests.

I’ve been riding a bike since early childhood, but now not as often as I’d like to. I do it both for fun and for transportation, usually in Primorsky District, where I live, but sometimes I go as far as central St. Petersburg.

The most fun part for me is that I’m always late, so I have to catch up with the others with my hair all ruffled. Overall, I think the best part is the great people and pleasant memories.

I don’t think there’s any point in scaling up this initiative, since the bike ride is all about the unity of our university’s team and how the staff, professors, and students are all equal when they ride together. One thing worth adding would be costumes. I’ve seen some of the participants come here wearing unusual get-ups, which is really cool.

I’ve been riding more-or-less constantly since my second year at university, when I started biking to classes. I ride my bike around two or three times a week. My favorite routes are along the Neva in Kirov Park and the Zelenogorsk-bound bike path.

I would say I mostly do it for fun, though from where I live, it takes the same time to get to work by bike or by bus. But if the weather is good, the bike wins.

The most fun for me was when I’d fall. I would take videos and photos for the university’s social media and kept falling from riding with one hand. Right now, I’m in Belgium on academic exchange and I still do that; though I’ve learned not to fall. Back then, I had no experience. If you go back and watch those videos, you can even tell that the operator is falling at one point.

At a previous bike ride, some of the students and staff of Faculty of Physics and Engineering would put on costumes. One student, for instance, rode his longboard wearing parts of traditional Chinese attire. I think we should do more of these costumed bike rides, even though we all come from classes or work. Maybe everyone could dress as a certain character, or pick a common color.

Here in Belgium, I, too, ride a bike, but it’s more difficult in Brussels, as it’s a very hilly city and you have to exert yourself a lot more. Sometimes I go outside the city and ride there. Biking in Brussels makes me think how St. Petersburg should really seize the opportunity: it’s a flat city, which makes it so much easier to establish a proper biking infrastructure. Even though Brussels is not ideal for that, there are still bike paths and parking spaces everywhere, you can take your bike on public transit, and all the cars treat you like an equal, which makes you feel safer. I would like to see St. Petersburg develop a similar system.

One very memorable thing is that my bike got stolen right before the very first Bike Ride with Rector. Now I have to find myself a bike before every time we ride, as this is one of my favorite events that the University organizes. Sometimes I wish they’d ride a little slower because I have to ride along while taking pictures of everyone. But besides that, it’s all perfect. I’ve been riding a bicycle since childhood, but I tend to ride a motorcycle more often.

To me, the most memorable bike rides were the second or third, when we brought together a record number of participants. It was sunny outside, and everyone was wearing ITMO merch. We even had a few school students with us. We’d ride and everybody would look at us and cheer for the university. As I passed a family, I heard someone say: “Mom, I’m going to apply to ITMO. They’re programmers and they’re into sports.” That was nice.

I wouldn’t change anything about it. As a nine-time participant, I realized that this is exactly what we need. The route has been adjusted a little, and now we take these pleasant family trips through some of the city’s greenest, most beautiful spots. I think that’s exactly the kind of event this should be.

I ride my bike every summer, usually through central St. Petersburg at night, or along the banks of Neva when the weather is good.