On June 23, the 2019 Russian Robot Olympiad, the national stage of the World Robot Olympiad, wrapped up at the Innopolis University (Kazan). This year, the venue, which has been hosting the country’s largest competition in the field since 2014, welcomed 211 coaches and 537 participants aged from 12 to 18 years old. Among them was the team from ITMO University’s Youth Robotics Laboratory, who presented their new invention, LEGO Education Helper, taking the first prize of the competition. 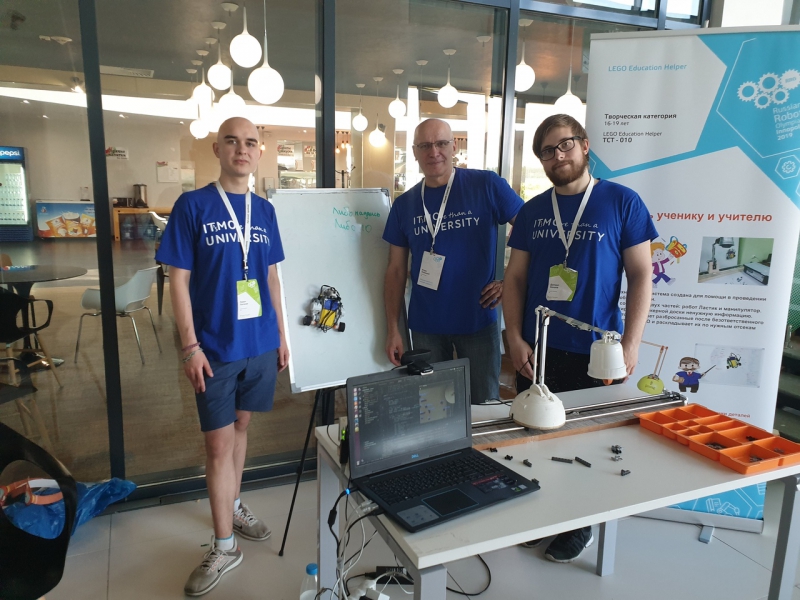 Members of ITMO University's team with their coach Igor Lositskiy

The topic for this year’s World Robot Olympiad (WRO) is Smart Cities. Young robotics enthusiasts are tasked with coming up with devices fitting into the concepts of smart education, smart workplaces, and other innovations in the field of intelligent urban management.

Comprised of first-year students Levon Pogosov and Daniil Nechaev and a Presidential Lyceum №239 graduate Maksim Mikhaylov, the team of ITMO University’s Youth Robotics Laboratory competed in the Open category in the Senior High age group. They decided to develop a solution combining two of the competition’s categories: smart education and smart workplace, creating LEGO Education Helper: a light source-equipped smart table which cleans itself on its own.

Because LEGO Mindstorms serves as the official platform of the robotics competition, the majority of robots presented here are created from these famous multicolored blocks.

“In the Open category, which our team traditionally competes in, we had the opportunity to use something other than LEGO, but we decided to stay true to the gear offered by our partners. LEGO often is the tool that young robotics aficionados start their journey with, and we tried to reflect this in our project of a smart work table for school students,” shares Igor Lositskiy, the head of ITMO University’s Youth Robotics Laboratory.

ITMO star team’s (all the participants are champions of international competition in robotics) project represents a new take on a typical school space. The limelight was on the table: a school desk with a lamp. According to the project’s authors, the latter was inspired by the famous desk lamp which adorns the logo of the Pixar animation studio. As the team assembled the lamp from scratch, it has a somewhat unusual dome made from a ramen noodles packaging.

The table is cluttered with small LEGO parts of different format: they represent the litter that a school student forgot to tidy up, hastily leaving the classroom for a break. Mindful of that, the lamp suddenly comes to life, transforming into a robot that gives the table a thorough clean, putting all the parts into different sections of a special box based on their color and form. In an instant, the desk is spotlessly clean, as is the blackboard behind it, which was scrubbed by a special eraser robot. Clad in a LEGO casing, the latter independently identifies the writing that needs to be erased based on pre-set parameters.

“The topic of WRO-2019 was announced in the middle of January. It took us around two months to develop the smart table. One month was spent on discussing the overall concept; we wanted to surprise the judges,” says the team’s coach Igor Lositskiy. “You can launch the clean-up system either through using a timer (for example, setting it to the end of a lesson) or by pressing a special button on the table. All this sets the lamp in motion; it then scans the table freely moving alongside it thanks to a special ledge, identifying the parts present as it goes. Using a neural network, the lamp classifies a part, captures it and puts it back where it belongs.”

The capture of small parts is effected via a robotics lifehack well-known to all robotics buffs: the so-called coffee gripper, or a ball filled with ground coffee beans. These allow the contraption to gently close in on small parts of different forms and lift them up thanks to the vacuum effect created. The LEGO Education Helper operates on the same if slightly modified mechanism.

The project received high marks from the judges panel, who singled it out among the 12 devices competing in the category. A special committee will then select the participants who will represent Russia on the international stage of the World Robot Olympiad. Only four Russian projects can go on to compete in the international competition, and those don’t necessarily have to be the winners or prize winners of the national stage. The committee will announce its final decision in September of 2019. Right now, ITMO University’s team is planning to improve the visual appearance of their creation and add in a couple of new features.

The international stage of the 2019 World Robot Olympiad will take place on November 8-10 in the city of Győr in Hungary. It will be the first time that Hungary hosts the competition.