What’s it like to take part in organizing a major international conference as a first-year student? How do you communicate with scientists from the world over and solve an avalanche of issues in mere hours? This July, ITMO University was home to the 4th International Conference on the Periodic Table, which brought together renowned chemists, physicists, educators, and historians of chemistry from Russia, the US, the UK, Spain, Italy, Germany, Israel, China, and other countries. The event’s organizing committee was comprised, in part, of students of ITMO’s School of Biotechnology and Cryogenic Systems, who spoke to ITMO.NEWS about their experience and their future plans. 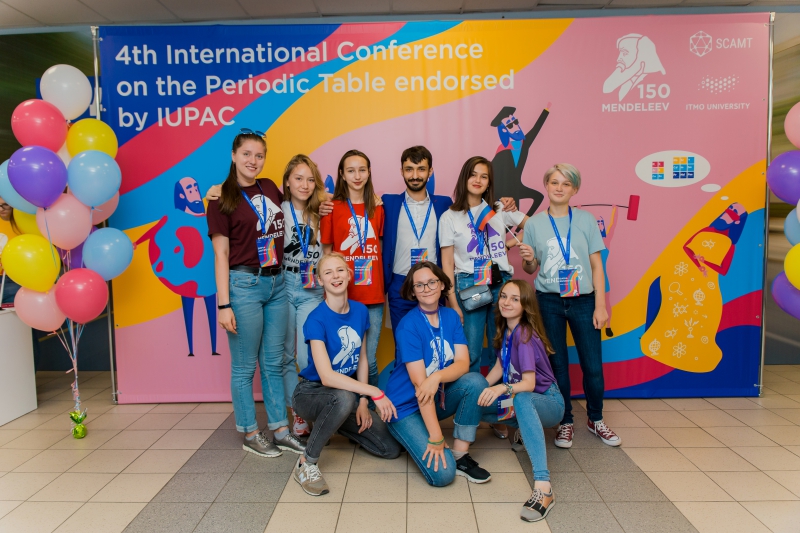 A few things made me interested in taking part. By the time Mikhail Kurushkin (chair of the Mendeleev-150 organizing committee and associate professor of ITMO’s ChemBio Cluster – Ed.) invited volunteers to participate, most of the students in my group had already gotten busy in other communities and clubs of the University, while I struggled to choose. I wanted to be part of the University’s life, and thus agreed to help. Besides, I thought even then that the conference would be mega-cool, because someone like Prof. Kurushkin doesn’t do boring things. And that was true.

Whereas my colleagues had their own specific areas of responsibility, my tasks were very diverse. I worked with documents, calculated expenses, drew up invitation letters, purchased materials, took part in designing the conference, was in charge of the poster exhibition and the volunteers, held briefings, and so much more. During the actual conference, I was responsible for managing the overall situation, relaying tasks to the volunteers, and, most importantly, organizing and overseeing the poster exhibition.

It’s wonderful that we, then-first-year students, were trusted with these responsibilities. I also learned that the ITMO.FAMILY community is more than just empty words: every member of the University’s staff was eager to help.

There were a few interesting moments at the conference. I never would have thought I’d struggle with buying children’s toys (scientist Dmitry Weise’s installation required some 900 balloons and 165 building blocks). That turned out to be an unexpectedly difficult task: no store stocked that many items. I did find enough at the end, but I had to pick 600 balloons up from a delivery office myself. People on public transport were looking at me funny. I also learned how to procure things pretty much from thin air. Over the course of the entire conference, I walked 60,000 steps.

First of all, I learned patience. You really need it when you’re sending over a hundred letters manually. I also learned to stay without sleep for days. I learned that even if you’ve already checked things a dozen times, you should still check again. I learned to react quickly to unexpected situations and to organize my mailbox efficiently.

Overall, this is a rare experience and a huge boost to my CV. You don’t even notice how you start to learn things. People around you start to realize that you are much more responsible than it might seem. It’s an interesting thing to be an organizer, and it makes you want to keep reaching higher and higher.

Being a part of an event as massive as Mendeleev-150 is a great honor for me. My school, the Laboratory for Continuous Mathematical Education, has been organizing the Baltic Science and Engineering Competition for more than 15 years now, and I’ve been a volunteer there once. I like setting up events, and so I was drawn in by the chance to do the same at my university. Besides, it’s an international event in my field of study. This was a great opportunity to meet prominent scientists in the field of chemistry.

In the run-up to the conference, I was doing admin work: keeping track of the signed-up guests, filling out their data, verifying payments. During the conference, I registered participants, managed the speakers’ presentations and was in charge of their entrance music, which is where I was able to unleash my creativity.

There were many memorable cases. I remember how a few speakers asked for specific music to be played during their entrance and came up to thank me later. One of the speakers sent in an updated version of their presentation at 2AM on the day of their talk and was very thankful for our timely response. But to me, one of the best memories will be the day before the conference when we were gluing together the objects for Dmitry Weise’s exhibit, running up and down the stairs all the time. At that point we didn’t even know how great it would all turn out.

This kind of experience helps you acquire a lot of what people these days call “soft skills”. That includes handling data, communicating over email and in person, and working as part of a team. Another thing that teaches you the importance of teamwork is that I’ve realized how, when you work with others, you are not allowed to make mistakes because it will hold everyone else up. You also learn about being supporting of each other. I’m very thankful to all of the organizing team because throughout the entire process I knew that someone will always be ready to help.

The conference provided me with experience and knowledge that will come in handy in the future. Some became less reluctant to speak with people, including those from other countries, and some acquired the useful habit of checking their emails regularly (that’s me). These are all things that you can only learn this way.

Becoming a part of the conference’s organizing team seemed like an awesome opportunity to me, and I decided that I shouldn’t miss out. Prior to that, I only volunteered at a couple of events, so being an organizer was a new experience for me.

I was in charge of organizing the flights, accommodation for the speakers, taxis for the participants, and lunches, buffets, and coffee breaks. There was quite a lot of work during those three days, and it was necessary to stay on top of several things at once. But it seems to me that everything went well.

It was great to be part of such a huge team. During the conference, we could see our guests enjoying themselves. I was surprised that some of them would even tell me to get in touch with them if I ever ended up in their city or went on exchange. This conference gave me, as well as others, a wonderful opportunity to meet professors and scientists from around the world and learn about their work and research.

Business writing turned out to be a very necessary skill. Before that, I rarely got to write official letters to people, but now I can do that easily in two languages. I also did lots of paperwork and interacted with the many departments of the University. Every once in a while our organizing committee would get together to discuss current issues. Importantly, Prof. Kurushkin always supported us and coordinated our efforts, which allowed everyone to know what they’re supposed to do and how.

I believe the most valuable thing we earn through taking part in these kinds of events are the connections. I’m sure that many of us will one day do an internship abroad, or perhaps work on projects with students from other countries. And the skills related to communication and organization will help us find jobs, apply for grants, or even organize other events.

I wasn’t very active in school; I helped set up events, of course, but only at the scale of my class. I always thought I’d start an active life once I’d enroll at university. When the opportunity to join the organizing team presented itself, I knew that this was my chance.

In the run-up to the event, I was the person responsible for branding. In other words, everything material that you can see or touch at the conference. I worked with designers, approved mock-ups, and reviewed ideas: from pins and T-shirts to banners and floor stickers. Surprisingly, I managed to handle this amount of work without having any prior experience. I enjoy a challenge and I’m glad that I took on this one.

I don’t think that it has changed me a lot, but what’s truly important and useful is that it helped me become part of the University’s community. Before this, I barely knew anyone, communicated just with a few members of my group, and avoided meeting new people. Thanks to the conference, I found a job at the University and have now been a staff member at the Institute of International Development and Partnership for several months; I also take part in the organization and management of other conferences.

The organizing committee of the International Conference Mendeleev-150 was also comprised by Anna Vanina, Daria Rusikova, Daria Minakova, and Olga Boyarintseva. At the time of the conference, they all were, too, first-year students of ITMO University.