Georgiy Ryabinin, member of ITMO University’s International Research Center “Biotechnologies of the Third Millennium” and PhD student at the Faculty of Food Biotechnologies and Engineering, has won a competition on the best project in the field of basic scientific research organized by the Russian Foundation for Basic Research (RFBR). ITMO.NEWS spoke with Georgiy and his scientific advisor, associate professor and head of the Center Denis Baranenko to find out what makes the search for new antimicrobial agents so topical, how chemical preservatives harm the environment, and what tasks their research currently faces. 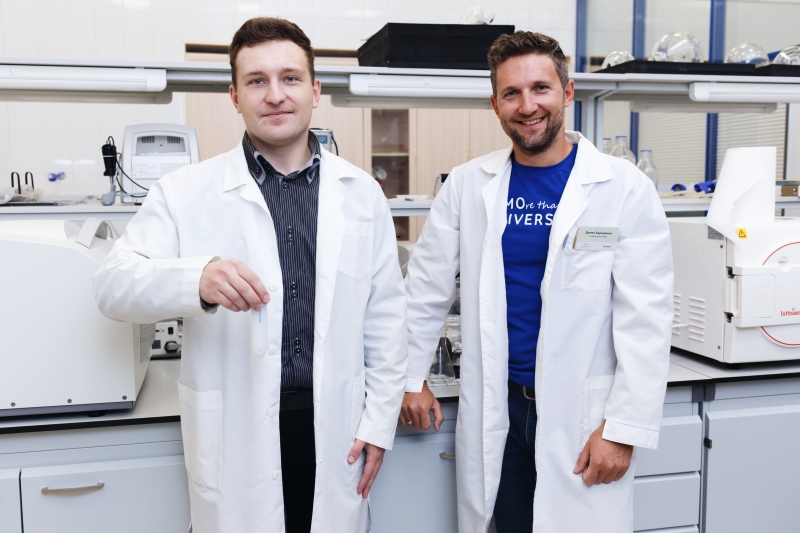 As part of the project, Georgiy develops alternatives to chemicals-based preservatives that could replace these in order to present the food industry with the opportunity of using natural bacteriostatic agents to prevent the growth of microorganisms in products.

“This is the first time that the peptides we are focusing on are being research. Their structure, functions and properties have never been described anywhere else before,” shares Georgiy.

Right now, the PhD researcher faces a number of tasks: using his own technique, he has to isolate the antimicrobial fraction of peptides, as well as study their composition, properties, and effectiveness in combating microbial growth. Georgiy also needs to write several scientific articles with a subsequent indexation by international databases and present his research at various international conferences so that these results can be tested by the professional community. As soon as in May next year, the graduate student will give a presentation at a major conference on biotechnology in the Estonian city of Tartu, to be heard by the field’s leading specialists from over 40 countries.

“Our current research objective is to identify the activity spectrum of the selected peptides, as different food products are spoiled by different microorganisms. It is believed that protein-based preservatives have a wide activity spectrum, but we still have to study their properties in more detail. In addition, for developed preservatives to be applied by the food industry, it is necessary to confirm their structure and safety in use. However, a special feature of food preservatives based on lactic acid bacteria metabolites is that they are a natural component of the gastrointestinal tract microbiota, which likely makes them harmless to humans,” explains Georgiy.

According to the student’s scientific advisor Denis Baranenko, what they are aiming to obtain as a result is a substance with antimicrobial properties to be used in the production of highly purified natural preservatives.

“Georgiy has already accomplished a significant amount of work on this topic. He started the project back in his Master’s studies, though he looked into antimicrobial substances in a broader sense then, while in his PhD studies he developed more of a focus on the application on protein-based preservatives in the food industry. What is more, our laboratory’s staff are also active in publishing their research on increasing the use-by date of food products and the characteristics of protein-based substances, which, in sum, allowed the RFBR committee to recognize the full potential of the research and ITMO University’s infrastructure,” shares Denis Baranenko.

Pitfalls of the research

For protein-based preservatives to be applied in the food industry, it was necessary to develop a new approach to their production. Conventional techniques, such as high performance liquid chromatography or extraction destroy the structure of the target component, which means that they prove to be impractical for isolating them from the lactic bacteria culture.

“It has to be noted that there are many classes of compounds out there: some are active, some aren’t. And what we need to obtain is a specific target component, which is, by the way, a rather difficult task that involves separating parts of a mixture from one another. Due to the complexity of this task, it is too expensive to perform it using conventional means. Georgiy proposed an original solution to this problem: he independently developed a chromatographic column for the separation of substances and the isolation of active peptides fractions,” says Denis Baranenko.

The PhD student needed a peristaltic pump to conduct the experiments, but as the equipment that would have the necessary properties was hard to come by, Georgiy designed and assembled his own device. Denis Baranenko says the resulting construction ended up being so successful that the student is now being approached by different companies asking him to produce one for them too.

“The chromatographic column makes use of a special filler, which is an absorbent that especially collects the target component. Thus, our proposed method for the isolation of protein preservatives allows to extract the target component from a complex compound of substances in just one step. The resulting substance is cleaned off impurities, but its structure is not destroyed. That allows us to keep its main property, antimicrobial activity, intact,” says Georgiy on the benefits of his technique.

Another of its advantages is that in principle it is very easy to upscale. This is a biotechnological process which includes growing the microorganisms and then enabling the isolation to take place. Thus, for the production of the larger amount of the target substance you just need to increase the volume of the bioreactor, the nutrient medium and the size of the designed column.

Searching for new antimicrobial substances, including natural ones, is a topical task for researchers all over the world. Additionally, Georgiy Ryabinin’s research also correlates with the widespread rejection of antibiotics. The problem behind this is that humanity uses too many preservatives and antibiotics, the remainders of which get into wastewater, and, consequently, alter the biological composition of water bodies and leave a negative impact on the environment at large. At the same time, the bacteria have been proven to be able to adapt to chemical preservatives and antibiotics, which renders these ineffective and largely useless, but also prone to causing dangerous symptoms of antibiotic resistance in the human body.

“At the current stage of our research project we cannot suggest that it will be fully possible for us to abandon all chemical preservatives as their different types’ effectiveness depends on what kind of food products we apply them to and what kind of effect we want to achieve. But the wider is the range of preservatives used, the more numerous are the opportunities to increase the best-before dates. It’s always safer and more effective to use two preservatives of different nature but in lower doses than just one in large quantities,” explains Denis Baranenko.