ITMO alumnus Vladimir Eremin is the head of a product management team at Veeam. His colleagues and he provide data backup services to major corporate clients. In five years, Vladimir’s career has taken him from junior analyst to the head of his own division. Speaking to ITMO.NEWS, he shares which of his university classes have paid off the most, how to find your calling, and how to act right at a job interview in the IT industry. 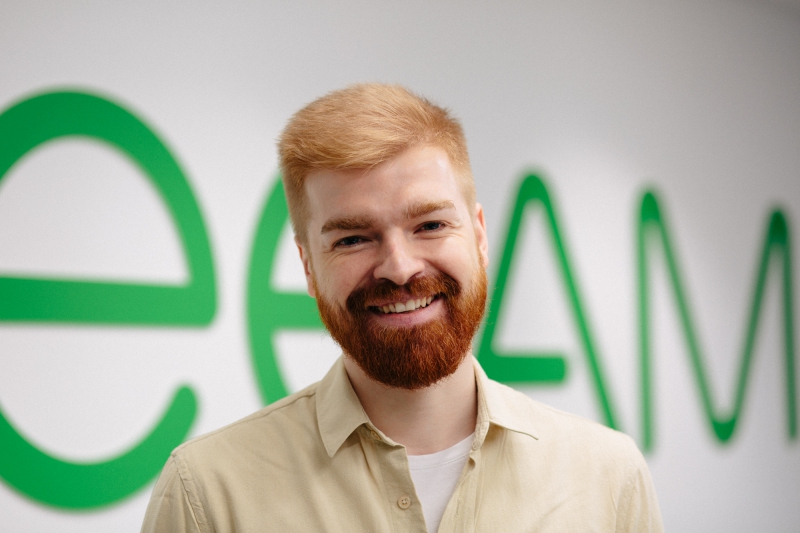 In 2011, you graduated from ITMO University’s Institute of Comprehensive Military Education (now Military Department). How did you come to study there?

My education began not in St. Petersburg, but in Moscow, at the Moscow Institute of Steel and Alloys. After a year there, my family decided that I hadn’t proven able to live independently, so I moved to St. Petersburg. I was able to find a program at ITMO that was nearly the same as what I attended in Moscow, so I managed to transfer after taking only a couple of extra exams.

What are your memories of the time you’ve spent at ITMO? What are the things you’ve learned that still come in handy?

The social life has been very memorable: when I came here in 2007, I met a company of like-minded friends with whom we organized the Mister and Miss ITMO competitions. The memories of that time evoke some strong emotions in me. As for education, the most important thing I’ve learned is to absorb massive amounts of information over short periods of time. This quality still comes in handy every day.

What was your first job after graduation? Were there any particular difficulties?

Back then there was nothing to say of Vladimir Eremin the specialist. I knew nothing, couldn’t do anything, my English was abysmal. I did have a very inflated ego and thought that every employer in the city should be lining up to hire me. In reality, only one firm wanted to hire me, a state enterprise where I began working as a junior sysadmin. My tasks often amounted to fixing a jammed printer in accounting. At some point, I realized that if something doesn’t change, I’d keep doing that for the next ten, fifteen, twenty years.

I started thinking about what I could do to change my destiny. First, I decided to learn English and improve my technical knowledge. My salary went towards books and private English classes.

A year later, I went to London to hone my English; it was honed in pubs and stadiums, in conversation with my peers from all over the world. In field conditions, so to speak.

How did you become part of Veeam?

After my trip to London, I began looking for a job. I had three or four basic criteria for my dream job in mind. I wanted to work somewhere international, to go on business trips, and to work with people as well as IT.

Sounds like too much, but just as I decided on these terms, a job opening for a junior analyst at Veeam had become open. The job description was everything I’d wanted. I took the list of requirements, copied it, reworded it, and made it my resume after adding a bit about my work experience as a sysadmin. Then, I passed three rounds of interviews and got the job.

What’s the most important quality for a young specialist who wants to pass a job interview at a major IT company? How do you make yourself appealing to the employer?

One mistake that many make is that they see job interviews as a one-way street where the only goal is to please the interviewer. In truth, the employer is looking for you just as you are looking for them. And if they reject you, it might mean that they’re looking for someone different, not that you’re lacking.

If you’ve got questions for the employer, don’t shy away from asking them. Don’t view this as a continuation of university life where one is a student and the other is a professor; this is not an exam. Don’t be overly eager, too. Just have a nice chat, demonstrate who you are and what skills you’ve got. Then let the employer decide if you’re their kind of specialist. It’s vague advice, of course, but I feel that remaining yourself is the key to acing a job interview.

What was your career at Veeam like? How long did it take for you to become a team lead?

All in all, it was about five and a half years. I came in as a junior analyst and was tasked with studying the company’s product, communicating with customers, and analyzing our competitors’ solutions and ideas.

There are two major development paths at the company: if you’re into analytics, but tend to avoid people, you can follow the analytics path, deal with technical documents, and remain undisturbed. Then there’s the other option, which I picked. If you like to socialize, you follow the product management path. The key here is to not be afraid of new challenges and expand your scope of responsibilities.

We had this automation service that nobody could make sense of; the programmers built it without taking user needs into account. I came in and applied the programming skills I had from university. I would reply to user feedback on our message board and think about how certain issues could be fixed. That, I believe, is how you move up: you look around, find out what’s become a nuisance to your company, and try to find a solution. My higher-ups noticed these efforts and shared a piece of the “pie” with me. My role gradually became more important and I would take on matters that appeared to be problematic. That’s how I ended up where I am right now.

What does your team do now? What sorts of products do you develop?

One of the company’s main products is Veeam Backup & Replication. This app makes backup copies and creates virtual machines, which is a highly promising field in the industry right now.

What is virtualization? When we virtualize a server, we simulate the components of an actual computer: its processor, RAM, hard drives, etc. This is all handled by special software – a hypervisor. Once installed on a physical server, it segments it into a bunch of virtual machines. Then, we put an OS on the virtual machine and there you have your virtual server.

You can set up several virtual machines within one physical server and have them running independent of each other. That saves money otherwise spent on purchase and upkeep of several servers, makes your sysadmins’ lives easier, and so on – basically, there’s a whole lot of advantages to it.

And what is your role in that process?

The best comparison would be to an architect, someone who plans the building, what it’ll look like, where the piping and ventilation shafts will go, what kind of view the residents would have, and so on. That’s what I do as a product manager.

In addition, my work always exists within the context of a release cycle. During the initial stage, before the product is out, a product manager must analyze the competitors’ product, reach out to the customer base, decide what the market has and what it lacks, conduct preliminary analysis, and outline the toolset of the future product. Then, we move on to graphic interface design, create templates, put buttons in place and decide how they will work. Basically, UI/UX design.

Then, we pass this on to the programmers, they provide feedback, we change things or insist (reasonably!) on our decisions. Then, the testing department finds every vulnerability, both in terms of code and business logic. We polish it up and ship the product. People use it and provide feedback. We talk to users, tell them how things work, then travel to conferences and promote our product. That’s what I do.

You and your company are taking part in Career Day at ITMO University. Why?

It’s important for us to attract talents. We grow quickly and therefore are always on the lookout for potential employees. The IT world is huge and there are lots of different specializations. Our company is sort of like a miniature copy of that world. So is ITMO University. We look for every kind of specialist and ITMO trains every kind of specialist.

Do you personally hire employees or meet recent graduates? How are they different from what you were like eight years ago?

I feel like graduates today are no better than they were in 2011. Even somewhat weaker in terms of personal qualities. I’ve had a few times where I decided not to extend a new employee’s contract after their three-month trial run. It happened because they saw the working environment as an extension of university: here’s a task that I’ll do so-so, get my “satisfactory” grade and move on. There was no initiative or desire to overperform. Nobody wants to work with people like that, because our work requires initiative and desire to grow.

Which qualities would you say are necessary for students who want to do well on the IT job market?

IT is a huge field, so I would phrase that question differently. You need to understand what you’re good at, what you enjoy, what you don’t, and look at the job market from that perspective. Pinpoint your unique advantage. Are you diligent and hard-working? Look for a job that requires that quality. If you want to talk to people around the clock, look for something else. It’s never worth it to try and fit external conventions. If you love doing something, try to make a career out of it, because that’s the way to achieve the most motivation and success.

It’s important to remember that there is no tacky or shameful task. There are things you enjoy and then there’s the rest. Remember that you needn’t meet anyone’s expectations, be that your parents or society. Use the time while you’re still young and free of social responsibilities to develop your potential. And that can only be done if you understand your internal needs. Face the mirror and ask yourself: what do I love doing? What drives me? And that’s what you should be doing.

In your opinion, is there still a place for traditional university education in a world where there’s a myriad of online courses and you can acquire new skills or even a professional diploma after a couple months of remote learning?

That’s a complex question that should be split into two parts. First: do I, as an employer, consider a diploma a requirement for any employee? No, I don’t. I have an employee without higher education who’s a lot better than any diploma holder who did the same job.

The second question is: can university education be useful? Of course! Besides knowledge, university also grants you the ability to acquire and absorb that knowledge. The biggest capital you earn at university is social capital. Those are the people around you, people who you can work with, people who are kindred in spirit.