As part of the Global Academics track, ITMO University’s Faculty of Technological Management and Innovations invited two specialists in the field of digital media and design, Andrew Bullen (France) and Janine Huizenga (the Netherlands). The experts organized a two-week course for ITMO University Master’s students, which resulted in the creation of four projects aimed at improving various areas of Vasilievsky Island. Read on to learn more about the advantages of the program and students’ projects. 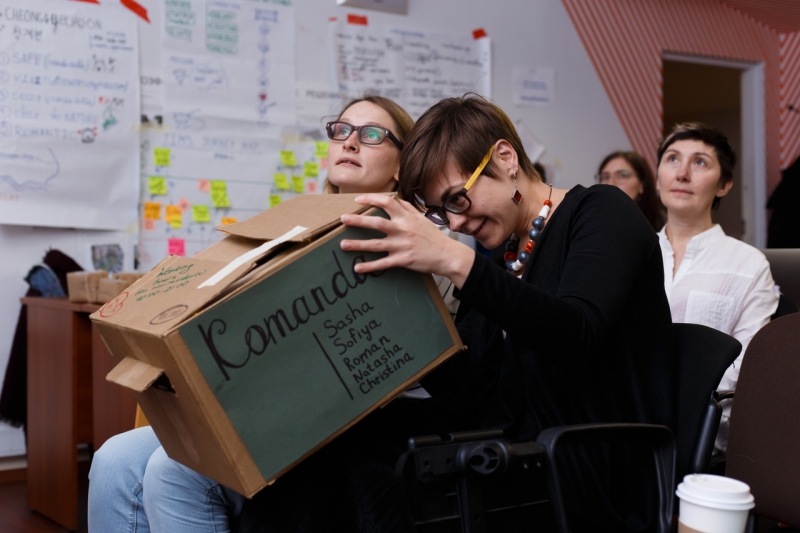 Andrew Bullen (France) and Janine Huizenga (the Netherlands) are the founders of the Creative Cooperative company, which works with government agencies, creative industry clusters, SMEs, large corporations, knowledge and cultural institutes and professional associations across Europe to facilitate the creation and design of innovative concepts for the application of digital media in such areas as urban development, citizen engagement, social projects, education and health. They have their own approach to the study of urban problems and the development of optimal solutions.

The course was organized with the support of ITMO University’s Fellowship and Professorship Program and the Global Academics track, which allows different university departments to invite foreign professionals.

“The Faculty of Technological Management and Innovations attempts to make maximum use of the unique opportunities provided by ITMO University’s Fellowship program. At the end of 2018, we learned about international specialists Andrew Bullen and Janine Huizenga and, having got acquainted with their unique backgrounds, we decided to invite them to our university so that they could share their experiences with our students. In particular, we were interested in their work in the field of project development and implementation. We didn’t only manage to invite them to our university but also organize an educational course for Master’s students of ITMO University’s Institute of Design and Urban Studies,” says Tatyana Tokareva, deputy dean of the Faculty of Technological Management and Innovations.

In the course of two weeks, Andrew Bullen and Janine Huizenga shared their experiences with ITMO students. It was not only lectures that the program of the course included but also workshops and joint hands-on research projects. The experts expanded on how a comprehensive pre-project analysis should be conducted, what a SWOT analysis is and how it can be used to determine a district’s strengths and weaknesses, as well as how to conduct surveys, and what an emotional map is and what opportunities it brings.

“These two weeks at ITMO University were really interesting for both our students and for us. Because every designer, every local has their own take on a particular space. And we were pleased to see people willing to make their city, at least its small part, a better place to live in. In the course of this program, we attempted to give students the tools that we use in Europe because they have ideas of their own and what they need most is help presenting them and bringing them to life. And our mission was to teach them that,” shares Andrew Bullen.

A total of four projects conducted by Master’s students of ITMO’s Institute of Design and Urban Studies were presented as part of the program.

The team “Four urban riders” proposed a solution to the problem of too many cars in the area near the ITMO building on Birzhevaya line, as well as the lack of recreation zones in this part of the island. The project group proposed the concept of a mobile area, which would include a partial ban on traffic, as well as the creation of multi-functional food trucks in the parking zone.

“We chose this site based on our personal impressions of it: there are a lot of students here, and in the summer there are no nice places to go to nearby. We conducted a survey and found out what students needed the most: a copy center and a food truck with coffee and snacks. It is a mobile space and at the weekend or in the summer, there can be many various activities, while on weekdays it can be limited to several food trucks with food and drinks. For me, it was a useful experience. Moreover, it was my first time interacting with international experts, so it was an excellent language practice for me as well,” says Maksim Budakov, a member of the Four urban riders team and a second-year Master’s student at ITMO’s Institute of Design and Urban Studies.

The project presented by the KOMANDA team focused on a house with dragons on Bolshoy Prospekt. The team attempted to solve the problems associated with a waste bin in front of a children’s playground, the lack of green areas and infrastructure and the excess of cars in this area. To solve these problems, the students proposed to install containers for separate waste collection, replace the playgrounds with elements made of natural and recycled materials, plant more trees, and create an information stand equipped with a bulletin board and the description of the building and its history.

The third team, FATCAT, focused on the problem of air pollution. They proposed creating an experimental zone combining educational and entertaining functions. According to them, with the help of such a zone, local residents could learn about the specific principles of an environmentally friendly lifestyle illustrated by real examples.

“It was a very interesting experience, primarily because it was presented in an unusual format: these are not just lectures that you have to listen to and then memorize the material. Instead, it is very practice-oriented,” says Anna Poduto, a member of the FATCAT team and a second-year Master’s student at ITMO’s Institute of Design and Urban Studies.

In the course of the program, the participants constantly shared their thoughts and ideas with each other. The interaction was so close, they say, that they almost forgot that it was initially meant to be a competition.

“I think that what makes this project particularly great is that it gives you an opportunity to get creative, forget about all the restrictions and rules that hinder your creativity. Of course, much of what we talked about in our projects can never be brought to life, but it was a life-changing experience working on these projects together. Apart from that, what was also interesting was to hear about the projects conducted by international specialists, and find out what methods they use in their work,” shares Andrei Kolomatsky, a second-year student at ITMO’s Institute of Design and Urban Studies.

The first place in the competition went to the Default team who presented a project for Repina street renovation. The team members proposed the creation of a special environment that would help people communicate in order to promote the technical, social and architectural development of their district.