ITMO Fellowship & Professorship is a program that provides international scientists and Russian researchers working abroad with an opportunity to conduct research or teach at ITMO. This year, 15 scientists joined ITMO University as fellows and 23 specialists participated in short-term tracks of the program remotely. Read on to find out what they are engaged in and what they plan to do at ITMO. 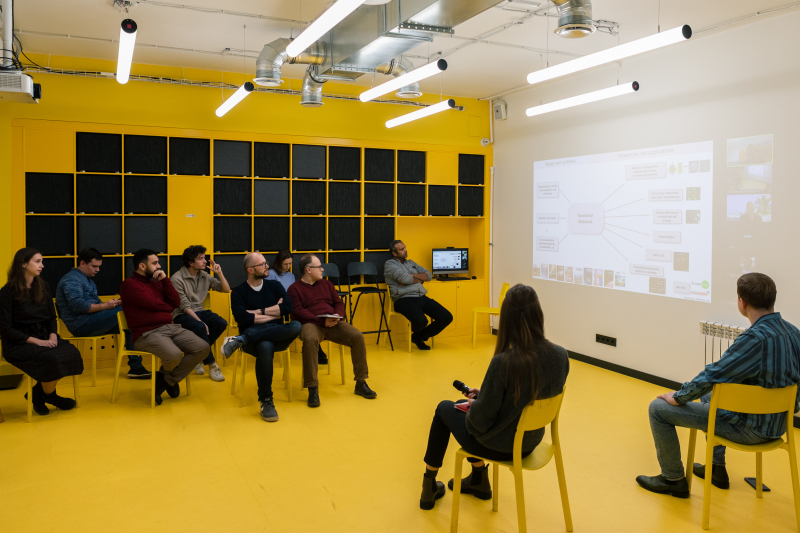 A picture from the meeting. Credit: Dmitry Grigoryev, ITMO.NEWS.

Researchers from any field of study can apply for any time period. The program includes several tracks, both short- and long-term. For example, scientists can act as visiting lecturers and conduct workshops, or do research – this is covered by short-term tracks. If a researcher wants to collaborate with ITMO for a year or longer, they can apply for a postdoctoral, research associate, or professor track.

According to Elizaveta Menis, Fellowship & Professorship program coordinator, the requirements for postdoctoral candidates have changed this year. Previously, any scientist could apply, even if they have zero h-index. Now, it must be four or higher.

There are more updates to come – the university also plans to create a new initiative for international PhD students.

“We are planning to launch a program for international PhD students so that they would be able to enter ITMO and receive a stipend. We think this is important because many students from abroad would like to study in Russia, and at ITMO in particular, but the only way for them to do it is the competition by the Ministry of Science and Higher Education of the Russian Federation and Rossotrudnichestvo,” says Elizaveta Menis.

All participants of the Fellowship & Professorship program are scientists with various backgrounds and research interests but that’s what creates a foundation for new interdisciplinary collaborations. They gather at annual meetings in order to get to know each other, share their research interests and projects, as well as talk informally.

One of such meetings took place at ITMO on November 17 and brought together 15 scientists. Among them are researchers who have collaborated with ITMO for years: Da-Wen Sun, a leading world specialist in food and biotechnologies, Anna Zhuk, a specialist in comparative genomics, Georgy Kopanitsa, a researcher who develops a healthcare decision-support system, and Daniel Sapori, a scientist engaged in the creation of perovskite solar cells.

Mehdi Mehrpooya, an acknowledged Iranian scientist in the field of technology and natural gas liquefaction, joined their ranks, too. He has already visited ITMO in order to hold a series of lectures and now, together with the School of Biotechnology and Cryogenic Systems, he works on cooling systems for natural gas liquefaction, including those using renewable energy sources.

The rest of the attendees were researchers who have recently started to work at ITMO by joining the School of Physics and Engineering, ChemBio Cluster, and Infochemistry Scientific Center.

Vitaly Nikolaev, who now works at the Nanopharmacy lab, previously participated in the postdoctoral program at the Hebrew University of Jerusalem. He’s engaged in the development of novel hollow micro- and nanoparticles of tin, antimony, and germanium to replace graphite in batteries. Even though graphite is the most common anode material for lithium-ion batteries, it has its disadvantages: low capacity and lack of suitability for sodium-ion batteries.

Pavel Levkin received a PhD degree in organic and analytical physics at the University of Tübingen and worked at the University of Vienna and University of California. Recently, he has joined the SCAMT team and is now the head of the Biofunctional Materials lab. He’s engaged in the development of functional materials and surfaces for solving  biological and medical tasks, such as the creation of efficient medicine to fight tumors using high-throughput screening (HTS).

Before joining the Fellowship & Professorship program, Sergey Shityakov received a PhD degree at the University of Würzburg’s Institute for Virology and Immunobiology, where he still works. At ITMO University, he is the head of the  Chemoinformatics research team and develops new methods for screening and molecular database creation in biomedicine. In the summer of 2021, he also took part in the Infochemistry Summer School, where he gave lectures to school students.

Mikhail Nosonovsky, a PhD graduate in mechanical engineering of Northeastern University, also participated in this year’s Infochemistry School. At ITMO University, he’s the head of the Triboinformatics team that is engaged in studies of friction and interaction between solid surfaces. According to him, friction is a part of many processes, including these in mechanical engineering and manufacturing, and this leads to lower longevity of mechanisms, so it’s important to come up with ways to regulate it.

Tamer Abdelrazik, a scientist from the City of Scientific Research and Technological Applications (SRTA-City), discussed the development of polymeric hydrogel membranes based on self-antimicrobial protein to be used in wound dressing applications. According to the scientist, this invention is useful for people who are at risk of getting the diabetic foot disease, when wounds on the feet can be left unnoticed due to the lack of sensitivity. This might lead to infection and even amputation. In order to avoid extreme measures, a complex treatment must be started in due time.

School of Physics and Engineering

Sergei Shipilovskikh obtained a PhD degree in organic chemistry at Lomonosov Moscow State University and collaborated with Loughborough University. Now, he’s engaged in the development of new approaches to the synthesis of new compounds at the School of Physics and Engineering. In particular, the scientist tries to create adaptive metal-organic frameworks to be applied in optics and electronics.

Andrey Volotka has graduated from a double-degree PhD program in theoretical physics by St. Petersburg State University and Dresden University of Technology and worked as a senior research scientist at Helmholtz Institute for five years before returning to Russia.

“I was very surprised by how ITMO University has grown. 20 years ago, no one could have imagined that it would become one of the leading universities in St. Petersburg and Russia. That’s why I decided to apply when I found out about the Fellowship & Professorship program,” said Andrey Volotka.

Andrey Volotka works in the field of twisted electrons together with other research fellows at the School of Physics and Engineering, Dmitry Karlovets and Stanislav Baturin. The latter scientist has also participated in a postdoctoral program at the University of Chicago and worked as an assistant professor at Northern Illinois University.

“Together with the Joint Institute for Nuclear Research (JINR) located in Dubna, we plan to generate twisted high-energy particles using an accelerator and create a lab at ITMO, where it would be possible to also study twisted low-energy particles,” says Stanislav Baturin.