Headed by Rector Vladimir Vasilyev, a delegation of scientists from ITMO’s School of Physics and Engineering has recently returned from the Joint Institute for Nuclear Research (JINR) located in Dubna, Moscow Oblast. JINR is an international intergovernmental scientific organization that conducts research in the fields of nuclear and particle physics, as well as the physics of condensed media. The visit paid by ITMO University’s physicists will result in a large-scale interdisciplinary collaboration and the launch of a new field of research for the university. 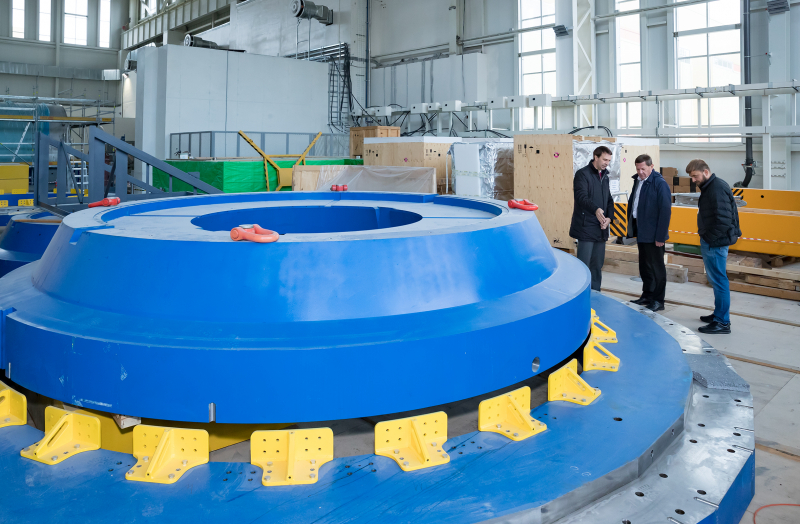 The idea for potential collaboration emerged last summer, when a group of researchers from JINR’s Dzhelepov Laboratory of Nuclear Problems came to ITMO’s School of Physics and Engineering to meet its leading research groups and get introduced to their projects. This became possible thanks to Dmitry Karlovets and Andrey Volotka, specialists in the fields of nuclear and particle physics, who are planning to develop these fields, new to ITMO, at the university.

To this end, collaboration with the largest research center in the field in Russia and CIS seemed a logical step to take. According to Dmitry Naumov, deputy director of science at the Dzhelepov Laboratory of Nuclear Problems, it was easy to identify potential topics for future collaboration.

“After our conversation with Pavel Belov, head of the School of Physics and Engineering, it was clear that we could establish quite an interesting collaboration – something of a synergy of fields. We have a strong background in particle physics, while ITMO excels in the fields of photonics and metamaterials. We thought we could try and create something new that hadn’t been done before, because usually our fields develop in parallel and don’t have any overlaps,” says Dmitry Naumov.

For instance, ITMO’s research in the field of metamaterials can be applied in the creation of detectors of elementary particles. Dmitry Naumov comments that JINR strives to use the most cutting-edge and efficient technologies when developing such detectors, while ITMO researchers can create metamaterials with set properties – which can come in handy in experimental projects conducted at JINR.

Moreover, researchers are planning to conduct joint experiments on the linear particle accelerator (LINAK-200) and the superconducting proton and heavy ion accelerator NICA that is currently under construction.

“There is an idea to apply LINAK-200 to generate beams of “spinning” electrons with angular momentum. That’s what Dmitry Karlovets is working on at ITMO. No one has ever created such beams with relativistic energy and there is a chance we could accomplish that through a combined effort of our two teams. If we are successful, it will be a global-scale project, which will be extremely promising for particle physics as a whole,” comments Dmitry Naumov.

ITMO’s researchers were taken on specially-organized tours of these research facilities at JINR. They visited the NICA particle accelerator, the LINAK-200 linear accelerator, the SuperHeavy Element Factory, the Laboratory of Precision Laser Metrology, and the alpha hall of the Baikal-GVD experiment, which is the largest international experiment in the field of neutrino physics in the Northern hemisphere.

Following this, ITMO scientists held a two-day-long research colloquium, where leaders of the university’s main research fields presented their projects and studies and discussed their potential applications within JINR’s scope of research.

Andrey Volotka talked about the start of research in the field of nonradiating nuclear excitation in atomic transitions and electron captures, while Dmitry Karlovets presented the first potential joint project with JINR, “Spinning” Particle Physics in the LINAK Installation of JINR. In the near future, the researchers will apply for a Russian Science Foundation grant with this project.

“Particle and nuclear physics haven’t been developed at ITMO before and we’re starting to work in these fields this year. We’ve known JINR researchers for quite a while, for instance, we’ve been collaborating with Dmitry Naumov for a long time. That’s why we decided to learn more about research done at the institute and present our own projects. Their research isn’t really similar to what’s done by ITMO’s own physicists, which made quite an impression on us. We’ve already agreed on some joint projects and experiments, both fundamental and applied. First of all, those that will run on the linear accelerator that will be launched at JINR next year,” says Dmitry Karlovets.

The parties have also agreed on student exchange – in the framework of internships, students will be able to work on unique and complex experimental equipment. According to Dmitry Naumov, JINR already has over 5,000 researchers, but there are so many large-scale projects that the institute will be happy to collaborate with young scientists.

“I believe it’s important to start implementing even small joint projects that would involve resources from both sides – and by resources I usually mean people. In the 2000s money was our currency and now, in the 2020s, it’s data. In the 2030s, we will value talent. And if we jointly contribute resources to such a project, it will later grow into a large-scale collaboration,” concludes Grigory Trubnikov, director general of JINR.