Halide perovskites are a relatively new group of materials that are used in solar cells, diodes, scintillators, and other devices. One of their main advantages is their availability and ease of production. They are also characterized by the stable bound state of an electron and an electron hole that makes up an exciton. By connecting an exciton to light in a photonic crystal plate, the researchers were able to reach record optical nonlinearity values, which makes the plates a promising tool for controlling optical signals and, in the future, can render them useful in optical computers. The article describing the experiment was published in Nano Letters. 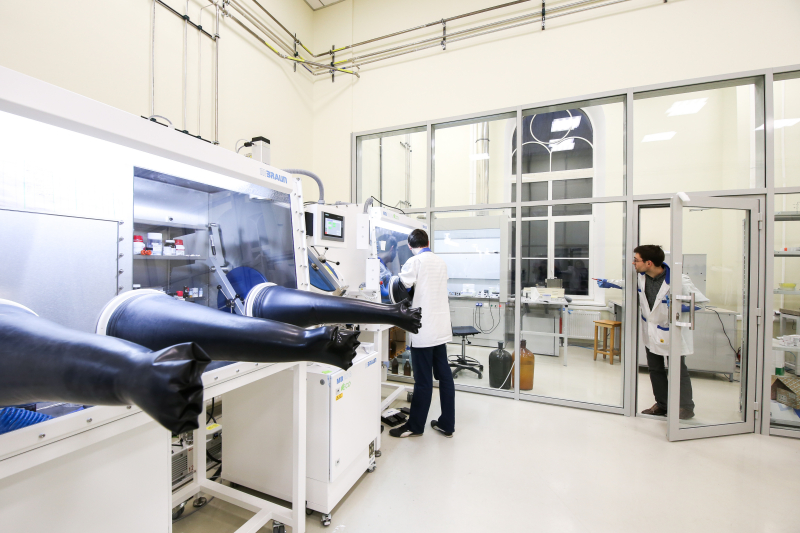 The Laboratory of Hybrid Nanophotonics and Optoelectronics. Photo by ITMO.NEWS

Condensed matter physics describes, among other things, exciton-polaritons, which are special states in materials caused by a strong connection between light and matter, a photon and an exciton. Excitons are positively charged quasiparticles that result from a bound state of electrons and electron holes; these particles can freely move in a semiconductor. When the bound electron and electron hole “fall” onto each other, the exciton annihilates, emitting a photon with the exciton’s resonance energy (frequency).

If we place the resulting exciton material inside a resonator working at the same frequency, then the exciton will recombine, emitting a photon, which without being able to escape the resonator will be absorbed by the material, producing an exciton – and the process will be repeated. This transformation of a photon into an exciton and back again creates a new bound state that is referred to as an exciton-polariton. It is an interesting research object that demonstrates properties of light, such as optical feedback and low effective mass, as well as those of matter, including the capacity to interact with other polaritons, resulting in nonlinearity.

Typically, when in need of an exciton material researchers use quantum wells based on GaAs and GaN semiconductors or 2D materials from transition metal and chalcogen elements, all of which are hard to produce and scale. Multilayer Bragg mirrors are normally used in order to connect light and matter in a material. However, the production of such mirrors is a complicated process in itself. Moreover, they are large and are primarily applied in labs. All of these reasons create difficulties in production of exciton-polariton systems, which still present quite an interesting object for nonlinear optics because they can cause strong nonlinear changes in a material’s physical properties (such as the refraction index and transmission capacity). Moreover, they can be used to produce energy-efficient low-threshold lasers.

Scientists from ITMO and their collaborator from England suggested binding light and matter in perovskites, which have an advantage in this respect because they possess polaron effects. These effects, in turn, make it possible for exciton-polaritons to bend the adjoining crystalline lattice, creating a bigger area for polariton interaction. Effectively, polaron effects modify exciton-polariton states in a way that makes it possible to observe exciton-polaritons at high and even room temperatures (which is rare), as well as an increased optical nonlinearity that is at the core of such optical devices as transistors, logical elements, transformers, and others.

In their experiment, the scientists demonstrated that a flat photonic crystal perovskite plate can be used as a resonator for exciton-polaritons. Nanoimprint lithography was used to obtain these plates: a lattice mold was used to deform the surface of a polycrystalline film made from MAPbl3 perovskite and acquire its replica. This suggested polariton system has several advantages over Bragg resonators, the first one being its low production costs: the agents used to make the perovskite are cheap, while the mold is not only accessible but can also be reused. Moreover, the system can work on a plane, which is more efficient for the development of certain devices, for instance, photonic chips that function primarily in this dimension. Additionally, there is no need to use a separate resonating element because the perovskite, as an active exciton material, acts as its own resonator.

“This polariton system allowed us to observe a record value of the so-called blueshift of a polariton. Our perovskite lattice acts almost like a diffraction one, in the sense that it reflects each wavelength (or color) at a certain angle. If we place a spectrometer, measuring the wavelength of incoming light, at a certain angle to our sample, then when we radiate this sample the spectrometer will detect a light of a specific wavelength, for instance, the one corresponding to the color red. Then, if we radiate our sample with a laser of a specific wavelength at a specific angle, this will produce polaritons, which, because of their strong nonlinear interaction, will change the wavelength – so we will see orange light instead of red. This is what is referred to as the blueshift of a polariton and it reaches record-breaking values in our system. This change in color can take dozens of picoseconds, which will make it possible to reach a frequency of over 100 Hz for optical computers that will be based on this effect,” comments Mikhail Masharin, one of the authors of the paper and a junior researcher at ITMO’s School of Physics and Engineering.

Applications of the study

Optical nonlinearities, based on perovskites and simple technological methods, like the one suggested by the researchers, can be used in various optical systems (from detectors to optical transistors), as well as applied in fully-optical encryption, transfer, and processing of information. In contrast to electron transistors that are not always efficient, can overheat, and have reached their fundamental limit in the number of elements per unit of surface and operation speed, optical transistors do not have such limitations. In theory, several optical transistors can be connected into a micro- or nanochip that can serve as an element of an optical computer.